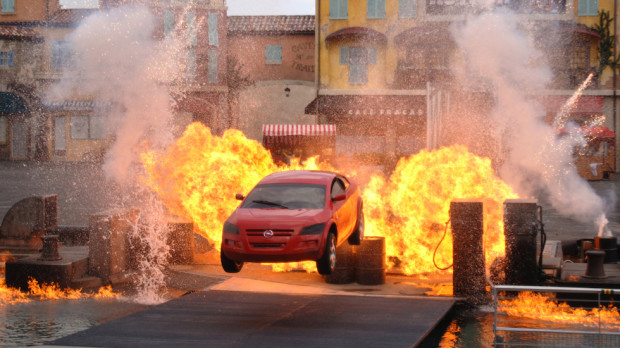 As Disney’s Hollywood Studios gets ready for a major expansion for Star Wars and Toy Story lands, another experience is set to close.

The Lights, Motors, Action! Extreme Stunt Show be closing on April 2, 2016. According to the Disney Parks Blog, “nearby locations around Streets of America” will also be closing that day as well. This could mean the Streets of America itself, and other smaller attractions, but we are not sure at this time. It’s been rumored the Monsters, Inc. meet and greet area may be closing.

UPDATE: Disney has also announced that the Honey I Shrunk the Kids Movie Set Adventure, Studio Catering Co., Monsters Inc. meet & greet and some merchandise shops will also be closing on April 2. The Earffel Tower, a long time icon for the park, will also be coming down.

It was previously announced the 2015/2016 season was the last for the Osborne Spectacle of Dancing Lights, and the nearby Cars and Phineas and Ferb meet and greets closed earlier this month.

Lights, Motors, Action! originally debuted at the Walt Disney Studios Park in Disneyland Paris in 2002 before making its way to Hollywood Studios in 2005 as part of the Happiest Celebration on Earth. The theater for the show took over much of the original Studio Backlot Tour, including Residential Street. The show itself has remained relatively unchanged since its debut. A Cars-related section was added in 2011, which you can see below.