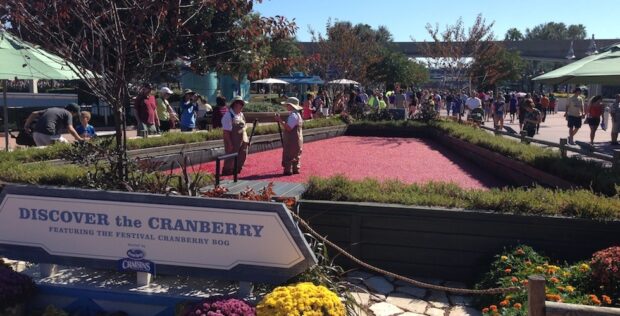 The Ocean Spray Cranberry Bog is back at the Epcot International Food & Wine Festival again this year. You’ve probably walked right past it a few times. But next time, stop and talk to one of the cast members pushing the berries around and you might learn a thing or two.

Epcot guests are invited to see how cranberries are grown and harvested at Ocean Spray’s cranberry bog exhibit. Filled with more than 1,000 pounds of fresh, floating cranberries, the bog presents an opportunity for guests to bask in the beauty of a harvest while learning about the taste, health and heritage of the fruit from Ocean Spray farmers and Disney Cast Members.

• Cranberries weren’t always ‘Cranberries’. For Eastern Indians, they were “sassamanesh.” Cape Cod Pequots and South Jersey Leni-Lenape tribes called them “ivimi,” or bitter berry. And the Algonquins of Wisconsin dubbed the fruit “atoqua.” But it was the early German and Dutch settlers who started calling it the “crane berry” because of the flower’s resemblance to the head and bill of a crane. That name stuck.

• In 1621, 52 Pilgrims and 91 Native Americans sat down together to celebrate their friendship with a three day-long feast and legend has it that cranberries were served at this first Thanksgiving. The Native Americans typically ate cranberries fresh, mashed with cornmeal and baked into bread. A recipe for cranberry sauce is even featured in the Pilgrim Cookbook of 1663.

• At first, growers picked the berries by hand. They then developed a more efficient dry harvesting technique, later revolutionizing the process with an idea called wet harvesting in 1960. By flooding the bog with water, the cranberry’s buoyancy allows it to float to the surface, where they are collected.

• A bog is an area of soft, marshy ground with acid peat soil, usually near wetlands, where the cranberries grow on long-running vines. You can find them all over North and South America, from Massachusetts to New Jersey, Oregon to Washington, Wisconsin, parts of British Columbia and Quebec, and Chile.

• A lot of people think that cranberries grow under water sense they usually see the berries floating on top of the water. But, what you’re seeing is actually the result of wet harvesting. The bog is flooded with up to 18 inches of water the night before the berries are to be harvested. The growers then use water reels, nicknamed “eggbeaters,” to churn the water and loosen the cranberries from the vine. Each berry has a tiny pocket of air that allows it to float to the surface of the water. From there, they’re corralled together, loaded into trucks, and shipped off to become the Ocean Spray products that fill your grocery aisles.

• Native Americans believed in the medicinal value of the cranberry, using the berry in poultices to draw poison from arrow wounds. They also used cranberries to make a high-energy trail food called pemmican.

• Cranberries provided the crews of whaling ships with fresh fruit and enough vitamin C to avoid the extreme weakness and even death that could be brought on by the dreaded disease scurvy.

• Dried Cranberries are a good source of fiber and help curb hunger longer than many snacks.

“The beauty of the cranberry isn’t just what you see on the outside, it’s how it makes you feel on the inside,” said Ken Romanzi, COO, Ocean Spray Global. “Through our sponsorship at the Walt Disney World Resort and Disneyland Resort, we can illustrate the many ways cranberries can be incorporated into snacks and meals every day, and educate guests about the healthy origins of the fruit.”

Can’t make it to the Epcot International Food & Wine Festival? Visit oceanspray.com for delicious everyday ideas and seasonal inspirations from around the world.

Guardians of the Galaxy: Cosmic Rewind has...