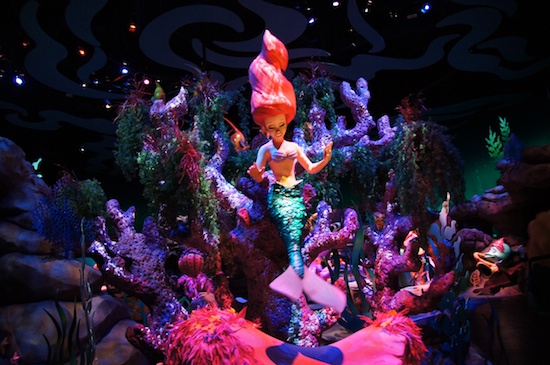 The Little Mermaid dark ride is now open. Sorry Walt Disney World guests, it’s only open at Disney’s California Adventure theme park. It’s still under construction at the Magic Kingdom. But since the ride will be the same on the inside when it opens as part of the new Fantasyland next year or so, it offers a great preview for east-coasters. We were able to attend the attraction’s grand opening to bring you video and photos of what’s coming to Walt Disney World.

Set in and around Ariel’s underwater world, the new attraction combines the appeal of a classic Disney dark ride with new technological innovations to offer guests a journey into the scenes of the film. Guests will feel as if they are descending below the ocean’s surface with a full cast of Audio-Animatronic characters and familiar songs and sounds.

The California version of the ride is located in the park’s Paradise Pier area. Its Victorian Exposition-style exterior, including a statue of King Triton and relief carvings of frolicking mermaids, was inspired by the pavilions found in the classic seaside amusement parks of the early 20th century. The entrance looks like a typical building entrance. 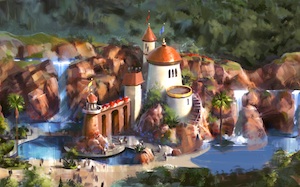 But the entrance in the Magic Kingdom’s new Fantasyland will more immerse guests into the story with an fully-themed seaside area. (Pictured here.)

Guests begin their journey by boarding clamshell ride vehicles, part of the Omnimover ride system that is familiar to fans of the Finding Nemo ride at Epcot or the Doom Buggies in the Haunted Mansion. Scuttle, the tale-spinning seagull, welcomes guests as they embark on their adventure, doing his best to tell the story of Ariel’s ambition to leave her ocean home and become part of the human world.

To meet Ariel and participate in her adventure, guests must first head “under the sea.” A combination of special effects creates a sense of descending to the ocean floor. The first locale on the underwater journey is Ariel’s grotto, where she keeps the treasures she has found on land – whozits, whatzits and thingamabobs – and sings Part of Your World. The Audio-Animatronics figure of Ariel features some remarkable magic touches, including an underwater “floating” red hair effect.

Next, in a musical extravaganza with an underwater party atmosphere, dozens of singing and playing marine creatures (“the carp with the harp, the newt with the flute”) try to encourage Ariel to remain Under the Sea. The conductor, of course, is Sebastian the crab. Keep an eye on Sebatian’s eyes. Unlike Audio-Animatronics of the past, this small figure’s eyes are animated. 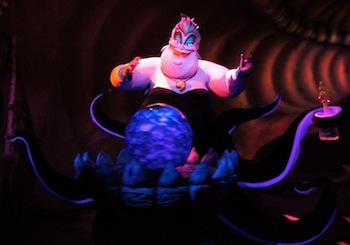 Next, as Ariel’s wish to be human is granted, guests follow her up to the ocean surface, where they witness Ariel’s friends encouraging Prince Eric to Kiss the Girl. This inspires a stormy response from the villainous Ursula and leads to the finale, which holds some surprises – even for those who know and love the motion picture.

The ride uses many of the original voice talents, and is enhanced with the award-winning songs of Howard Ashman and Alan Menken. Glen Keane, supervising animator and character designer for Ariel in the film, was a creative consultant in the attraction’s development.

Here’s a tour through the under construction attraction with some of the film animators and Imagineers, followed by a complete ride-through and our photo gallery:

Santa and Mrs. Claus to vacation at the Swan and Dolphin Hotel this summer

What a great addition to the lineup of attractions! Personally, I enjoy a “ride” much more than a “show”.

I went on the Little Mermaid ride at California Adventure yesterday for the first time. I was very disappointed in this ride, it was very uninspiring. In today’s 3 D technology they could have done so much more to have to have the riders fell that they were under the sea. It was very low tech that reminded me of its a Small World ride. The technology and look of the ride wasn’t much different than Mr. Toads Wild Ride or Peter Pan which 50 plus year old. I just think in today’s world of 3 D technology they could have done so much more with this ride.