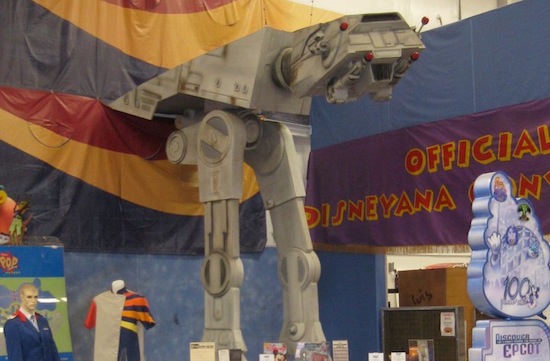 MouseSurplus, a Kissimmee-based Disney Collectible clearinghouse, will be featured on the hit A&E series “Shipping Wars” next Tuesday. The winning bidder will attempt to deliver a 25-foot-tall Star Wars AT-AT Walker and an 6-foot X‐Wing Fighter to a customer in Utah.

Roy lands the shipment of his dreams when he gets to haul some large one-of-a-kind props from his favorite sci-fi movie. But when he is cut-off by another trucker on the highway, he’s afraid it may have damaged these priceless movie artifacts.

The Star Wars AT-AT Walker and X-­Wing Fighter replicas featured in the episode were custom made for the FAO Schwartz at Caesars Palace in Las Vegas. The replica pieces were sold to MouseSurplus when the store closed in January 2004. The AT-AT Walker replica measures 25 feet tall, weighs over 2,000 pounds and took over a dozen people and close to 80 man hours to assemble at the MouseSurplus headquarters.

I’ve been told of this store but I have never seen it when I drive through 192, my kids would love to buy some merchandise

I’m the lucky buyer of the AT-AT Walker. It’s presently in storage in Orem, Utah.