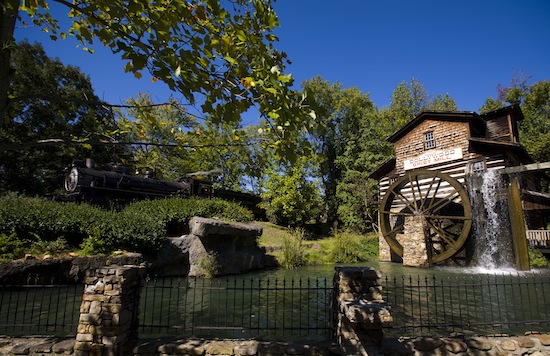 Nashville, Tenn. – Dolly Parton’s Dollywood Company and Gaylord Entertainment have entered into what is referred to as a “memorandum of understanding”. This initial formal agreement discusses the intent of Dollywood and Gaylord to enter into a 50/50 partnership to develop a 105-acre family entertainment zone adjacent to the Gaylord Opryland Resort & Convention Center. What is being called “phase one” of the development will be an as yet unnamed $50 million water and snow park.

With a fall 2012 groundbreaking, the park is expected to open in time for summer 2014. The area will function as a water park during the summer months and as a snow park during winter months.

“I’m so excited about this opportunity,” said Dolly Parton. “I am confident that partnering my Dollywood Company with a great company like Gaylord will create something truly special. We’re all working on new types of entertainment to do in the daytime and nighttime for the whole family so we can bring new folks to the area year round.”

This is an interesting announcement to say the least. On one hand, this could end up being just another water park. While I personally love water parks, there are not too many “truly special” water parks. What did Dolly mean when she said “new types of entertainment”? One hundred and five acres seems like a big piece of land for just a water park, although too small for a full theme park. When an attractions company, like Dollywood, starts a development, one has to take notice.

Dollywood sits 650 miles north on I-75 from Orlando. By reputation, this is one of the country’s great theme parks. Boasting five, soon to be six roller coasters with the country’s first wing rider coaster, the park and water park cover 185 acres. Set in the beautiful Great Smokey Mountain in Pigeon Forge, Tenn., Dollywood is a full resort complete with hotel and mountain cabin accommodations.

On the other side of the state, Nashville and especially the Grand Ole Opry area is an intriguing part of this story. The Grand Ole Opry itself should remain the centerpiece of any visit to the area. Whether or not you like country music, one should take the time to visit and experience a live performance. While it’s current location is not the original location of the Opry, the hall is a shrine to the history of country music. Anyone who is anyone in country music past or present, and yes Dolly Parton, has performed at the Grand Ole Opry. In fact, she has been a member of the Opry since 1969.

Any discussion of the area and theme parks should include a discussion of the now defunct Opryland USA theme park. A shopping area and the expanded Gaylord Opryland Resort and Convention Center now occupy the area where the theme park sat. The park operated from 1972 until it closed its doors for the last time on Dec. 31, 1997. The land-locked park was flanked by highway to one side, the Gaylord on another, making further expansion impossible. During the 1990s, the park saw a drop in attendance due in part to competition coming its east Tennessee neighbor – Dollywood. It is these factors and others that led to the park’s demise.

Anything I have said here, except the factual aspects of the project, is pure speculation. I suspect, the master plan will continue to develop depending on how the early phases perform. It will be interesting to see how this all develops.

Dollywood’s Smoky Mountain Christmas to be bigger than...

Thanks for sharing valuable information………….

Out of the Loop: Skateboarding legend flips...