Out of the Loop: Fast & Furious ride opening in June at Universal Hollywood 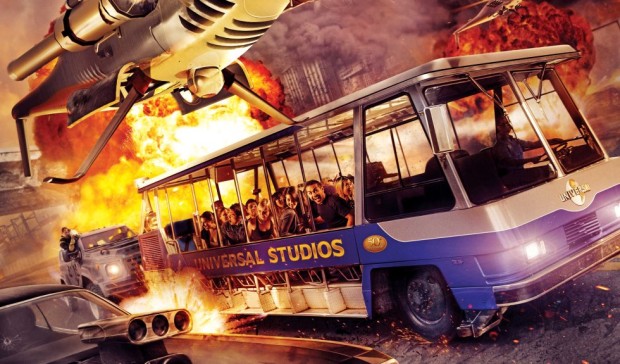 Universal Studios Hollywood has released a behind-the-scenes look at its upcoming “Fast & Furious—Supercharged” thrill ride and revealed the opening date as June 25, 2015.

The 90-second behind-the-scenes footage offers insightful perspective on the making of the attraction along with interviews with several of the Fast & Furious franchise cast members and stars of the ride, including Dwayne Johnson, Michelle Rodriguez and Tyrese Gibson.

Fast & Furious—Supercharged is a high-octane, adrenaline-fueled thrill ride and new grand finale to the Studio Tour. The hydraulic motion-based ride will tell an original Fast & Furious story that fuses special effects with a 3D audio system and 3D-HD imagery, projected onto the world’s longest and most expansive 360-degree screen. Spanning nearly 400 feet in length to encircle Studio Tour guests within a newly constructed 65,000-square-foot structure on the legendary backlot, the custom-built screen will employ 34, 4K projectors and a sophisticated projection configuration system to envelop guests in unprecedented realism.

Coupled with an intense blend of visceral effects, Fast & Furious—Supercharged will take guests on a ride that begins the moment they board the Studio Tour. Exclusive interstitial content that was filmed with the cast members will be featured on the tram monitors, highlighting interactions as they engage guests en route to the ride’s climatic scenes. Along the tram route and featured on the ride, sightings of numerous prop cars from the Fast & Furious series, including Dom’s iconic Dodge Charger, will enhance the story.