Out of the Loop: Holiday World announces ‘Thunderbird’, a launching wing coaster for 2015 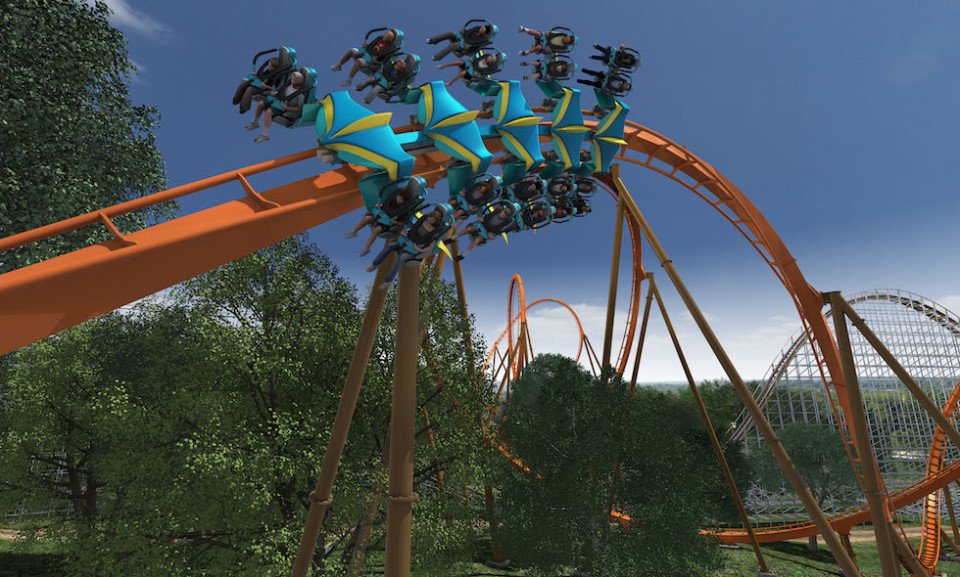 Holiday World, Santa Claus, Ind. – Holiday World is best known for its trinity of wooden coasters not easily matched by any park: The Raven, The Legend and The Voyage. For years however, fans of the park have clamored for a full-sized steel monster to call their own. Well, the wait will soon be over.

Thunderbird will be only the fourth Bolliger & Mabillard manufactured winged coaster in the United States. This will be the first launched wing coaster in the nation, going from 0-60 in 3.5 seconds. The ride will invert four times. Other features include a huge 125-foot vertical loop, a 14-story Immelmann loop, a zero-g roll and a barrel roll. Common with other wing coasters will be the harrowing near-miss elements: keyholes, The Voyage (yes it overlaps the wooden coaster), woods and the ground. As with the other Holiday World coasters, it will travel through wooded and hilly areas of the park terrain.

The price tag is quite hefty, coming in at $22 million. In comparison, the record-breaking longest water coaster in the world, Mammoth at Holiday World, was reportedly a mere $9 million. The most expensive coaster in the park is Gravity Group’s The Voyage with a reported price tag of $6.5 million.

Holiday World is described as the first “theme” park in the world. It was opened as Santa Claus Land in 1946 by Louis Koch. Perhaps unbelievably, the park remains a Koch family-owned theme park, growing by leaps and bounds over the past two decades. Fittingly, fourth generation owners Leah and Lauren Koch discussed a tribute to their father Will Koch, the former park president, who passed away unexpectedly in 2010 at age 48. The launch station will be emblazoned with the words “Will Power” and other tributes will be contained within the launch house. Will was instrumental in conceiving and even in assisting in the design of the aforementioned trinity of critically acclaimed wooden coasters.

There seems to be ever-growing reasons to visit this Southern Indiana park, located about an hour west of Louisville, Kentucky, and three hours south of Indianapolis. The quaintness of Santa Claus, Ind. could draw you in with its year-round Christmas store and church named, yes, St. Nicholas. The three “frees” might bring you to town: free parking, free sunscreen and free Pepsi. Yes, there are free Pepsi and sunscreen dispensers all over the park. Are water parks your thing? Splashin’ Safari is a world-class water park included with Holiday World entry, complete with the two longest water coasters in the world. It is a family-friendly place that, in my opinion, employs some of the most genuinely nice people in the business. Then, of course, there are the coasters.

Park President Matt Eckert announced that Holiday World would open one week earlier than usual in 2015, the last week in April. Thunderbird is expected to debut at that time.

Here’s a look at the announcement video: