Out of the Loop: Six Flags announces their 2015 coasters and attractions 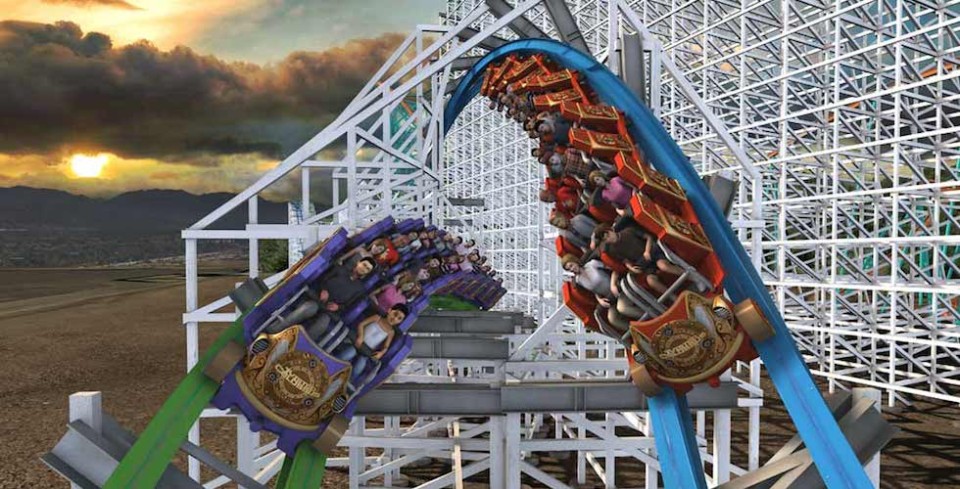 Once again, as it has for several years now, Six Flags announced all of their new 2015 attractions company-wide on a single day this past Thursday. If you are Six Flags fan, it was like Christmas morning! Here’s a rundown of all that will be new in 2015.

Six Flags Magic Mountain, Valencia, Calif. – Twisted Colossus is the next iteration of the classic Colossus wooden coaster that once starred in National Lampoon’s Vacation as the “Screemy Meemy”. Colossus will get a Rocky Mountain Construction (RMC) makeover being transformed into a next gen steel coaster utilizing what RMC calls IBox track technology. Using Colossus’ wooden framework, this new track will allow for maneuvers only possible with steel. Here are some of the highlights:

• 128-Foot drop at 80 degrees.
• Top Gun stall. The train slows while upside down.
• High Five feature. Colossus is a twin coaster, in the high five the trains are over banked toward each other giving the illusion you could high five your buddies on the opposite train.
• Zero G Roll which is a 360 degree twist.
• Four-minute run time over 5,000 feet of track.

Six Flags New England, Agawam, Mass. – The Wicked Cyclone will also use the classic framework of an old wooden coaster. In this case, the Cyclone, fashioned after the classic Coney Island Cyclone, will be used. The coaster enthusiast community has been torn on these makeovers. No one wants a classic coaster to go away, but most like the final result. The Twisted Colossus and The Wicked Cyclone mark the fourth and fifth such makeovers at Six Flags parks. Here is how the Wicked Cyclone stacks up:

Six Flags Fiesta Texas, San Antonio, Tex. – Batman: The Ride is described as a “4D Free Fly Coaster”. Riders are two abreast on either side of the track in winged coaster style. This, however, is very different than a winged coaster. The seats have the ability to spin 360 degrees and these spins are set into motion by special magnetic fins strategically placed at the top of a 12-story hill, at two beyond vertical raven drops, and other locations for a total of six spins. These spins reportedly give the rider a feeling of weightlessness.

Six Flag Over Georgia, Atlanta, Georgia – The Joker Chaos Coaster
Six Flags Great Adventure, Jackson, N.J. – Looping Dragon
Six Flags Discovery Kingdom, Valejo, Calif. – Dare Devil: Chaos Coaster
Six Flags America, Baltimore, Maryland/Washington DC – Bourbon Street Fireball
So, imagine a vertical looping coaster. Now, take away all the other track leaving only the vertical loop. Now send the train around that loop forward then backward, again and again. That’s what you get with Joker, Dragon, Dare Devil, and Bourbon Street. These are all the same, but themed differently. Twenty riders will face each other two by two. These loops will be seven stories high. At times the train will hang upside down before executing more forward and backward loops.

Six Flags Over Texas, Arlington, Tex. and Six Flags St. Louis, St. Louis, Missouri – Justice League: Battle for Metropolis is a 3D interactive shooting dark ride. This ride’s original incarnation was in Australia at Warner Bros. Movie World as Justice League: Alien Invasion 3D in 2012. Now the ride makes its way stateside undoubtedly with some upgrades as Six Flags describes the ride as an “all new 3D interactive dark ride”. After making their way through an interactive queue, riders don 3D glasses and brandish laser guns. They will battle the likes of The Joker and others as they try to save their favorite DC comic heroes like Batman, Superman, Wonder Woman and more. Jacksonville, Florida’s Sally Corp along with Pure Imagination, Alterface, and Oceaneering all combine to create this 20,000 square foot attraction. Read about and see Warner Bros. Movie World’s Justice League in action here.

Six Flags Great America, Gurnee, Ill. – Six Flags near Chicago will be celebrating its 40th season in 2015. The entrance, Carousel Plaza Square, featuring their fabulous two story carousel will be completely refreshed. Each of their 14 coasters will be celebrated with in-park festivities and weekly events. Three classic kiddie rides will be restored to their former glory including Tots Livery Surrey Carriage, Red Baron Airplanes and Lady Bugs. Read about Great America’s 2014 addition Goliath here.

The Great Escape/Splashwater Kingdom, Lake George, N.Y. and Six Flags White Water, Atlanta, Ga. – Both of these parks will receive water park upgrades. Great Escape/Splashwater Kingdom will open Buccaneer Beach. This area will be a watery playground complete with shallow water play areas, water jets, kid-sized slides and a pirate ship. Six Flags White Water will open the Dive Bomber water slide. This slide will tower over 100 feet tall. The Dive Bomber will have a harrowing drop floor launch with riders dropping almost at 90 degrees. This will be the tallest slide at White Water.

Six Flags Mexico, Mexico City, Mexico – After opening the RMC-designed Medusa Steel Coaster this year, Six Flags Mexico opens another thriller in 2015. The SkyScreamer will pierce the Mexican skyline at a height of 242 feet making it the tallest swing ride in Latin America. Just this year, Six Flags New England’s SkyScreamer topped out at 409 feet tall making it the tallest swing ride in the world. Read about it here.

La Ronde, Montreal, Canada – An abandoned carnival funhouse is the setting for La Ronde’s walkthrough scare Maison Rouge Labyrinth of Terror. If clowns freak you out, this may not be the attraction for you as Maison Rouge is inhabited by evil clowns. According to the promotional video, it’s a journey that “begins with fun, but ends with blood”! No need to wait for Halloween, this one will be around all season long.