Out of the Loop: Six Flags’ record-breaking Goliath debuts 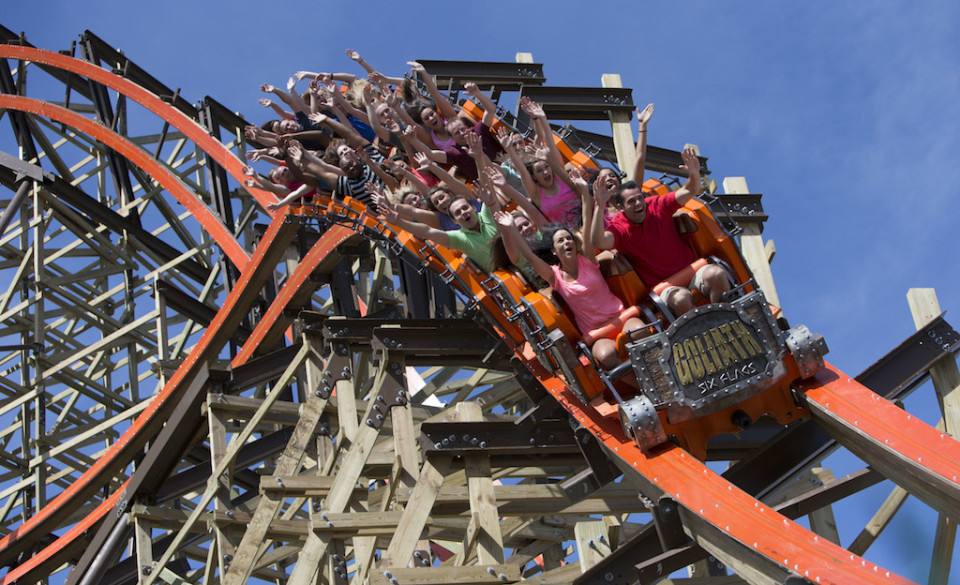 Go∙li∙ath noun \gə-ˈlī-əth\
• In the Bible, a giant Philistine warrior who was slain by David with a stone and sling.
• Someone or something that is abnormally large and powerful.
Synonyms: behemoth, colossus, monster, giant

My quick impression of the park that opened in 1976 is that it is quite a nice, clean park with both innovative rides and classic rides including some that harken back to the golden age of amusement parks. A perfect example of a classic ride is the incredibly beautiful Columbia Carousel whose double-decker design makes it, and its twin in California, among the largest in the world. Its horses are each replicas of famous carousel horses in the world. The thrill rides trace a history of roller coaster building over the past 35 years. The Whizzer is a Schwarzkopf manufactured Stengel designed “Speedracer” model coaster, one of only two operating in the world. Other coasters include the 202-foot hyper-coaster Raging Bull, the flying coaster Superman: Ultimate Flight and the winged X-Flight. They have a racing wooden coaster called American Eagle, the inverted coaster Batman and the Coney Island Cyclone-styled Viper.

Perhaps it should come to no one’s surprise that Six Flags partnered with the creative minds at Rocky Mountain Construction to design their newest coaster, Goliath. Six Flags is no stranger to Rocky Mountain Construction with the company having renovated Texas Giant in Arlington, Iron Rattler in San Antonio, and Medusa Steel Coaster in Mexico City utilizing a technology called Ibox Track. Arguably, the most innovative coaster of 2013 was Outlaw Run at Silver Dollar City in Branson, Miss. This over-banking, triple-inverting wooden coaster took the coaster world by storm last year and is Goliath’s closest coaster relative. In Great America’s vast stall of coaster types, this Rocky Mountain Topper Track coaster is a perfect fit. 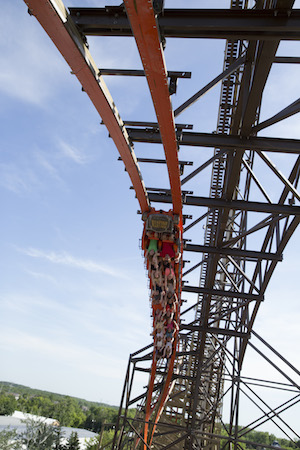 The Technology
Goliath, like Outlaw Run before it, utilizes a track technology called Topper Track. While coaster construction certainly varies, standard wooden coaster track usually consists of flat steel strips affixed atop a wood track. The Topper Track consists of a steel box atop laminated wood. The coaster car rides completely on this steel box track, giving a smoother ride than any traditional wooden coaster. Additionally, Goliath’s Topper Track is grout-filled to dampen the sound and to further smooth the ride. Moreover, the unique track allows for non-conventional coaster design in a wooden coaster, including inversions and over-banked turns. The train is lightweight, reducing wear and tear on the track. It utilizes a unique multi-ride wheel design and suspension system.

The Ride
Having not ridden on Outlaw Run or Rocky Mountain Construction renovations, I really had no idea what to expect. As I sat in the train car with my seatbelt on and lap bar locked, I felt very secure and yet free from the constriction of shoulder harnesses that are common to inverting coasters. Despite its name and record-breaking drop, I couldn’t help thinking that the Raging Bull coaster at over 200 feet, dwarfs Goliath a bit. Additionally, in terms of length of track, it is 1,500 feet short of the racing American Eagle coaster. The name “Goliath” itself isn’t very unique for coasters, even within Six Flags, this being the fifth to be named as such. As our train ascended the initial lift hill, these admittedly petty observations left me.

My arms instinctively shot up in the air as we plunged nearly straight down 180 feet into a tunnel, only to be shot up a giant over-banked top hat turn. I remember some serious airtime as we approached the first inversion – a 180-degree, zero G roll into an inverted drop. Then we were shot into the feature worth the price of admission, an inverted zero G stall where you seemingly float in suspended animation for a few seconds. One final overbanked dive twist and then the brake run. What a ride!

It really doesn’t feel like a wooden coaster at all. Its smoothness rivals many steel coasters. As our train pulled to a stop, we all broke into spontaneous applause. As we pulled back into the station, some perhaps cliché terms popped into my head – groundbreaking, innovative, game-changing. All of the terms seem inadequate in describing what Rocky Mountain Construction and Six Flags have brought to theme park fans in Goliath. I guess I’d simply call it the next “big” thing.

A look at the history of the...