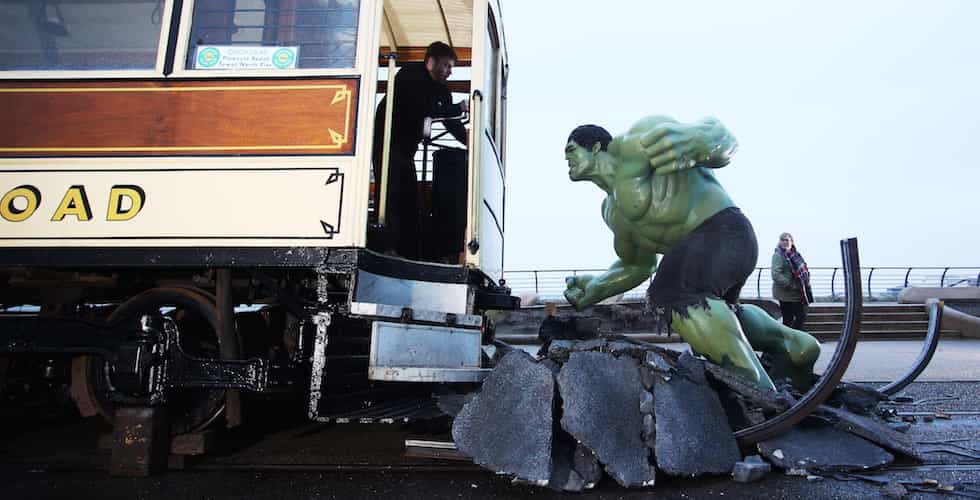 The Hulk stopped traffic in Blackpool, England recently, as the iconic green machine could be seen stopping a tram on the seafront.

This stunt was staged by Madame Tussauds Blackpool, to commemorate the ground-breaking launch of its new Marvel Super Heroes area, where the Hulk is joined by Thor and Spider-Man in a £1 million, 5,501-square-foot addition to the museum.

Up against a vintage Blackpool and Fleetwood Box Car 40 tram below the Blackpool Tower, the super hero was surrounded by destruction, debris, sparks and smoke. The tram was partially upended from its track, and the tracks had been ripped through the concrete – giving pedestrians a good reason to do a double take.

“I was walking by dog on the promenade and didn’t expect to come face to face with the Hulk!,” said Bella Blackburne from Watford, England. “I thought I’d walked onto a movie set. It’s an incredible stunt and I can’t wait to see the Hulk and his fellow Avengers in the attraction.”

This stunt was to celebrate the epic new addition to Madame Tussauds Blackpool, which is now open to the public. Incorporating four distinct zones, this new area will include new figures as well as interactive experiences for guests.

The attraction takes its inspiration from the original comics as well as the theatrical films of the Marvel Cinematic Universe.

“We are thrilled to announce the addition of Marvel Super Heroes to the attraction, in an amazing U.K. first,” said Matthew Titherington, general manager at Madame Tussauds Blackpool. “The new area will be a must-visit destination for all Marvel fans, offering the chance to get up close and personal to their favorite characters from the big screen.”

“We are working closely with Merlin Magic Making and Marvel on the design and build to ensure the new attraction is authentic to the comics and offers unique experiences,” continued Titherington. “As many of the interactive elements have are bespoke to Madame Tussauds Blackpool – something U.K. visitors have never seen before.”

Currently guests can see the following characters and zones, with more under consideration and development:

Other characters that can be found are Groot and Nick Fury. Each zone offers a fun photo opportunity along with an immersive experience. Details on Zone 4 will be announced in early 2018.