I spent a few hours at the Magic Kingdom today, as I was invited to come watch the Donegal High School Marching Band from Mount Joy, Penn. perform before the 3:00pm parade. Be sure to tune in to the upcoming June 21 episode of Inside the Magic (show #220) for a binaural recording of the band marching down Main Street U.S.A.

Now, on with the photo update…

With the recent announcement that Stitch’s SuperSonic Celebration would be permanently going away on June 27, less than two months after its official premiere, I decided to check in on the show while it’s still around to see how popular it is. Around 5 minutes before the 3:30pm show began, here’s what the gathered crowd looked like: 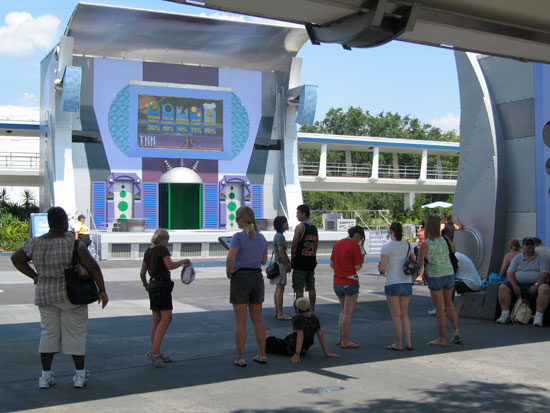 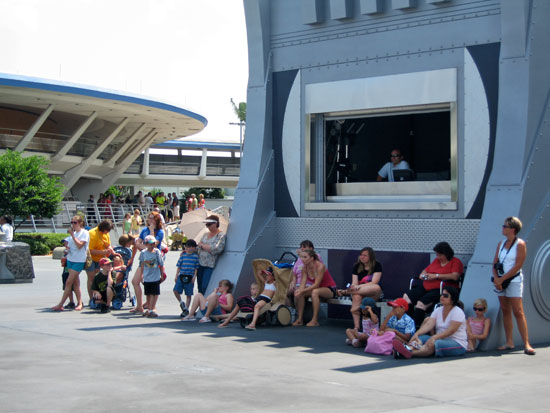 Around thirty people crammed into every available nearby shaded area, trying to avoid the midday extreme heat while waiting for the show to begin.

As the show began, I spotted a cast member wheeling a cart nearby filled with ice-cold water and fan spray bottles. After standing out there for a few minutes, I was quite tempted to purchase one. Very smart. 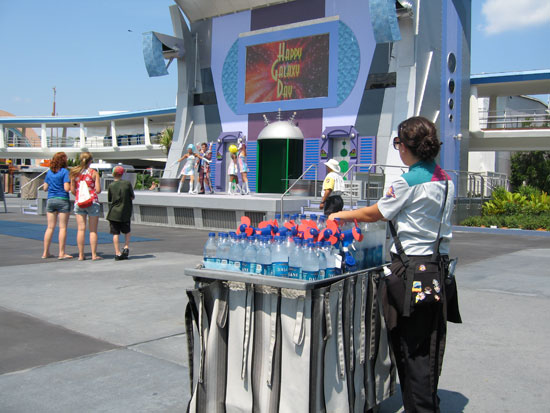 The nearby Carousel of Progress let out a couple of minutes into Stitch’s SuperSonic Celebration. I’d estimate around 70-80 people exited the Carousel theater, though only around 10 stopped to watch Stitch’s show. But a surprisingly large amount of guests wandering through Tomorrowland did gather once the outdoor show began.

Here’s a panoramic view of what the watching crowd looked like at its max (click the image to enlarge in a new window):

In the end, around 75 people decided to take the time to watch Stitch’s SuperSonic Celebration. But as you can see, most of the group crowded underneath the shade provided by the Tomorrowland Transit Authority track. I can only assume that this is one of the major reasons why Stitch’s Supersonic Celebration will be coming to an end so soon. No one wants to sit on the hot pavement for 30+ minutes in the summer heat in Florida. I wonder if the show would have continued longer had it been featured in the now-demolished Galaxy Palace Theater, which included seating and some shading.

Meanwhile, over at Stitch’s other Tomorrowland attraction, Stitch’s Great Escape, the wait time was posted at just 10 minutes, which really means no wait at all. This crowd was gathering to enter the next show and no one was waiting behind them. At the same time, Buzz Lightyear’s Space Ranger Spin had a 45-minute wait and most of the other Magic Kingdom attractions had at least 30-minute posted wait times. 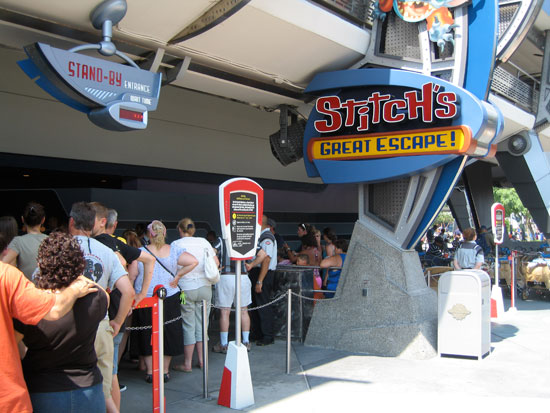 I seem to remember the ExtraTERRORestrial Alien Encounter that formerly occupied this space almost always drawing a bigger crowd than this.

Elsewhere, in Fantasyland, work continues on the exterior of the Pinocchio Village Haus restaurant and “it’s a small world” attraction: 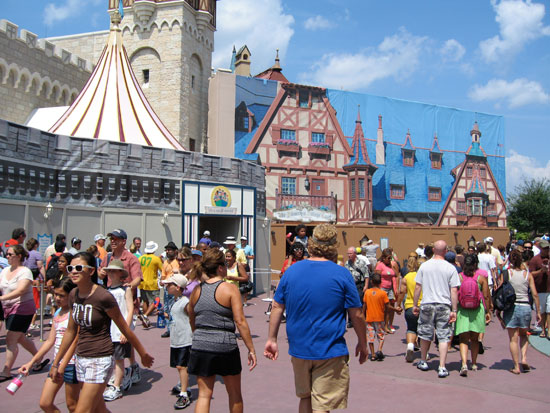 Disney certainly has a knack for creating scaffolding-covering tarps that look just like the buildings they’re hiding. This Pinnochio Village Haus one is especially convincing. Both the restaurant and attraction remain open during the exterior refurbishment.

Finally, on Main Street, I spotted these left over Star Wars Weekends big figs still available for sale. Get ’em while you can: 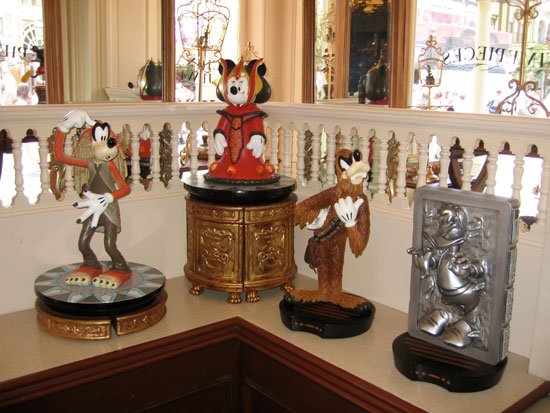 That’s all from the Magic Kingdom today!

During the soft opening of Stitches Supersonic… whatever, that’s EXACTLY where we stood. In the shade, under the TTA track.

do we have any idea of what will replace it? i mean that was one expensive expansion!

It will be used for special events, presumably Mickey’s Not-So-Scary Halloween Party and Very Merry Christmas Party. Beyond that, Disney has not said anything about its future use.

For SGE to still be a walk on when there is so little to do in Tomorrowland and the crowds being so large, I think it is really telling. Hopefully a replacement is around the corner.

Is there any word when the Fantasyland scaffolding is coming down?

Hubs and I watched some of the videos of the SuperSonic Celebration when it first opened. Less than two minutes into it and we agreed that we’d bypass it on our next trip.

I love Stitch, but so far all of Disney’s attempts to wedge him into the parks (aside from the meet & greets) have been abject failures. I want to see them bring Alien Encounters back!

According to your opinions from all you other guys, something tells me that Stitch would definitely need a long-awaited (intergalactic) vet treatment after this!

Soarin’ getting an update, plus news for...