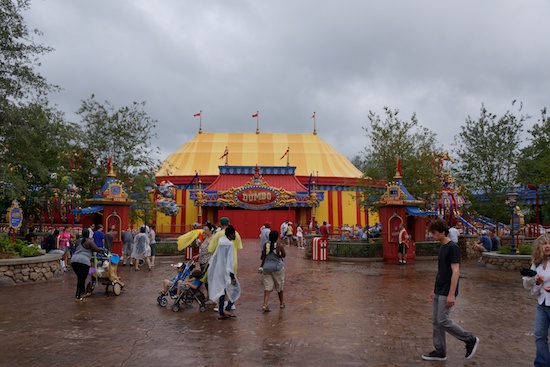 We grabbed our umbrellas and raincoats and headed out to Disney’s Magic Kingdom earlier this week. As you can see above, both of the Dumbo spinners are now running. With the construction walls gone, it looks a lot nicer, although the front door is still boarded up. 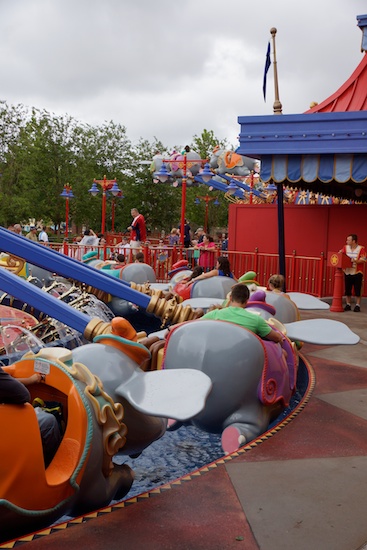 Here’s a look at the latest spinner with the first one to open in the background. They were using one spinner for Fastpass returns and the other for standby riders. 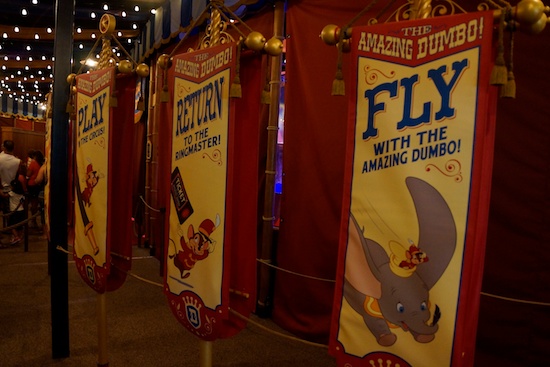 The lines went through the tents but the playground area inside wasn’t open and the pager system wasn’t in use. 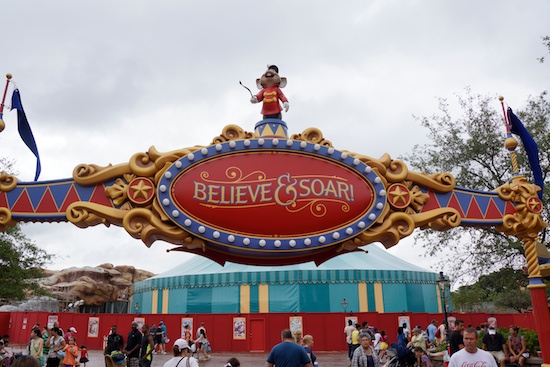 This is the back of the Dumbo entrance sign. Notice Timothy Mouse on top of the sign. 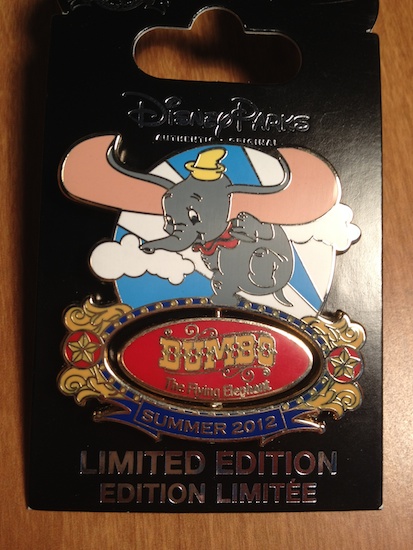 We saw this pin on sale at the pin traders store in Frontierland. The Dumbo sign spins around to show the wording that’s on the back of the sign above. 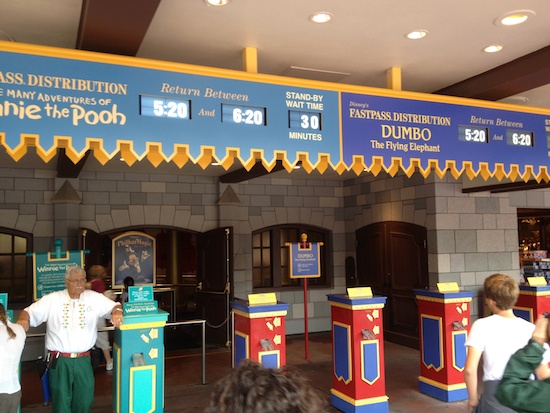 The Fastpasses for Dumbo, and the Winnie the Pooh ride are available by Mickey’s Philharmagic show. Also notice the signs show the stand-by wait time as well. It’s interesting that Dumbo will have Fastpass and the pager queue system. It’s also interesting that the location to get the Fastpass is so far away from the ride. It’s unknown if this is a permanent location. 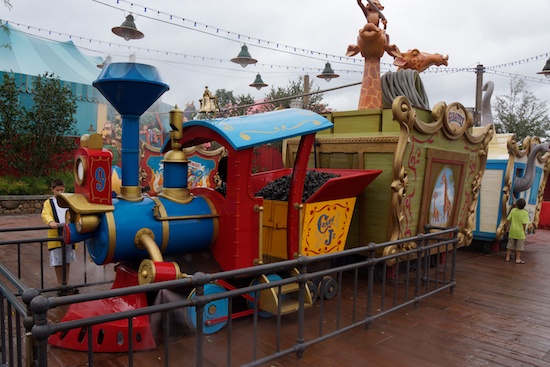 The water effects weren’t running at the new Casey Jr. Splash ‘N’ Soak water play area. They might as well have been, since everyone was wet from the rain anyway.

Here’s a video we took when the area first opened: 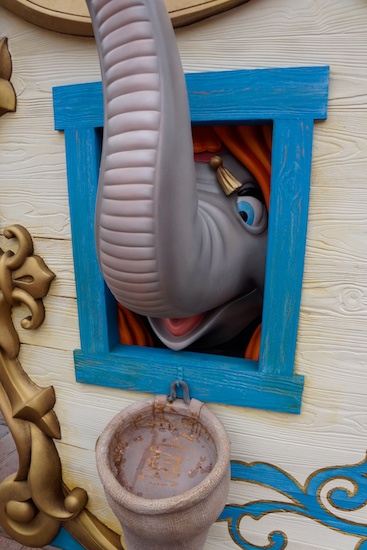 We noticed the elephants were out of food. I’m not sure if kids ripped the food off here or if the Imagineers are just in the process of replacing it. 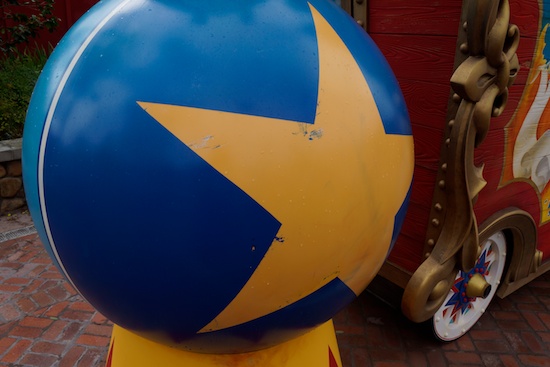 It’s not officially open yet, but this ball already has scratches on it. I’m sure they’ll touch this up soon. 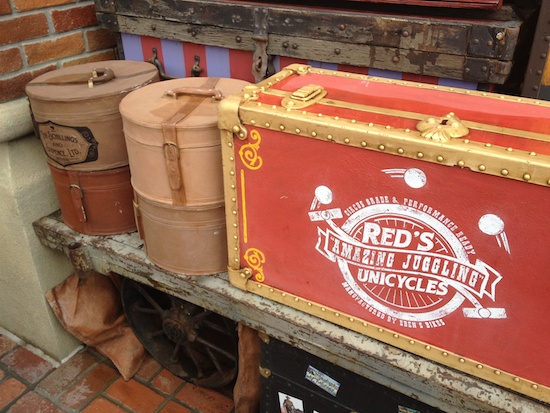 Over behind the train station we noticed a few new things. This trunk has a reference to a Pixar short and the hat box on the left mentions unbirthdays, a reference to Alice In Wonderland. We also noticed the elephant water barrel bowls are now gone. They featured the elephant’s names on them from Dumbo and there was some disagreement over the spelling of Caddy on one of them. Maybe they’re changing it to Catty, or have just removed it for good. 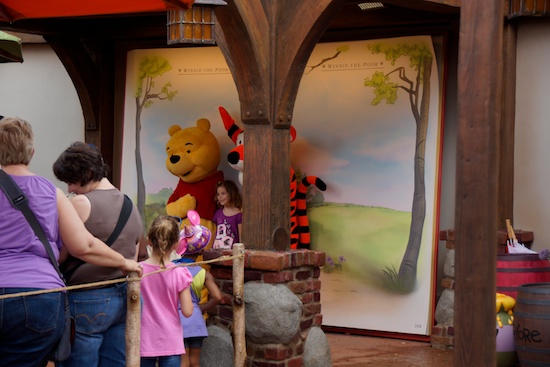 Over by the Winnie the Pooh ride, they’ve added this new meet area. This used to be Tigger’s Bouncy Place as part of the interactive queue. But the area was only open a short time. Rumor has it that the bounce spots weren’t safe enough, so now it’s gone.

Here’s a video taken during one of the rare times it was open: 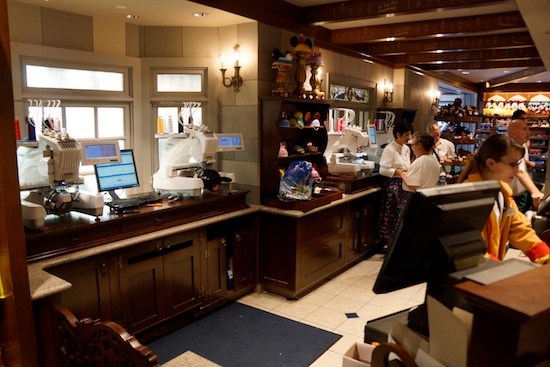 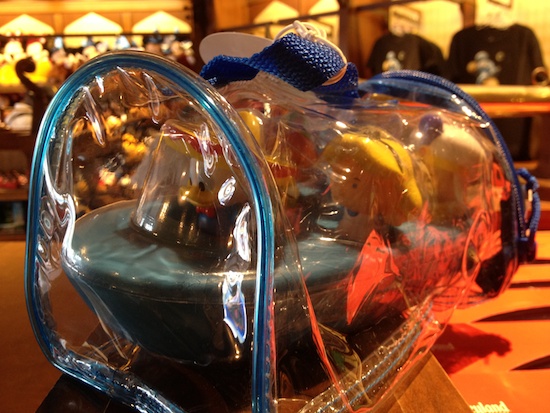 We also spotted this for sale in the Philharmagic gift shop. It’s a boat and characters from the It’s a Small World ride. They sold this years ago, but back then it featured many of the original dolls from It’s a Small World. Now it features Disney characters as they appear in the Disneyland version of the ride. 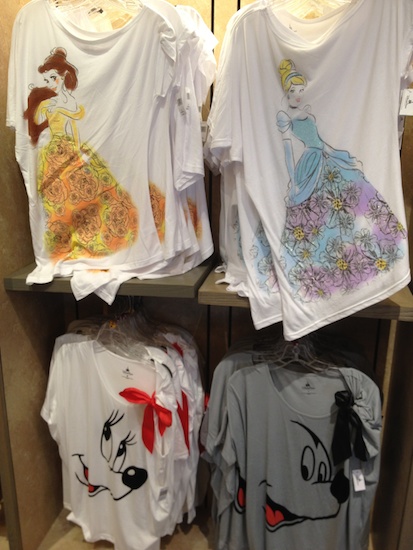 These ladies’ T-shirts caught our eye in the shop next to the former Snow White ride. 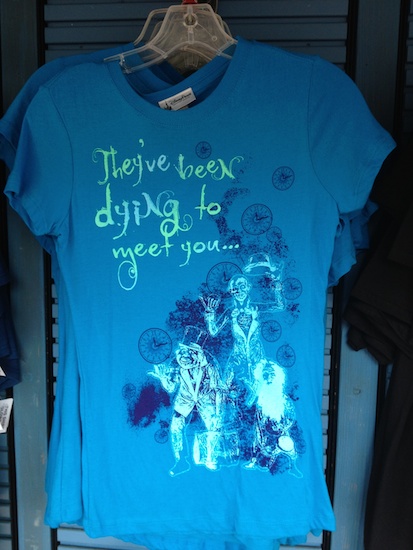 This new ladies’ Haunted Mansion T-shirt was for sale on the cart outside the ride.

This new Pirates of the Caribbean T-shrt is just weird.

We were hoping to see the Rainy Day Character Calvalcade, a parade Disney holds in place of the Celebrate a Dream Come True Parade when it’s raining. But they went ahead with the normal parade, which probably wasn’t a great idea. As you’ll see here, it started pouring and some of the performers and characters had to leave the parade. Others used umbrellas. I’m not sure why Ariel wanted an umbrella.

Legoland Florida celebrates its first Fourth of July with Red, Brick and Boom

it’s to bad that the magic kingdom hasen’t have a good parade all these years. Still the same paradefloats.. They really should change this parade in something really new en exciting like the most other parades in other disneyparks around the world!

I think the pirate shirt is a reference to the Willow Smith song I whip my hair back and forth.

A ten year old girl would get it…

Re. Gary’s posting of ” most other parades in other disneyparks”; I remember when HS was about to premier the current “Pixar Pals Countdown to Fun Parade”. We *just happened* (do you believe that lol?) to find ourselves with just enough time to be there and get great spots for watching, the day it premiered. Well, we were a bit underwhelmed with it, and even now my family thinks it lacks a lot of the “oomph” of the past parade. That said, and I’m not sure why, we still think the MK parade is exciting and lots of fun. Now as far as the evening MK Electrical Parade? Bleah. Bring back SpectroMagic!

I agree, that pirate shirt is weird and unnecessary. But I am excited to come visit later this year!

Ugh, how long does it take to build a mine coaster? It seems like a 2014 release date is ridiculous. When I was there in December 2011 they had construction workers working late into the night. Granted, I don’t know the first thing about construction, but with round-the-clock work you would think the expansion could be done in 2013. I hope it’s not a marketing ploy to release things slowly.. can’t wait 🙂

Did you notice that the train cars in the Casey Jr area are numbered 71, 82, 89, and 98…the same years the 4 Florida theme parks opened!?! Nice touch!

You can find the small world boat always at Disneyland in California…It is the better ride and the orginal…:)! most of the shirts you can find at downtown disney and in all of the theme parks main shopping area’s….There is a Casey Jr. Ride at Disneyland also along with Pinocchio, Alice in Wonderland and Mr. Toad’s wild ride. The Pirates ride at Disneyland is longer and has two hills and much better than Disney World…But you can’t compare Cinderella’s castle it blows sleeping beauties away! 🙂