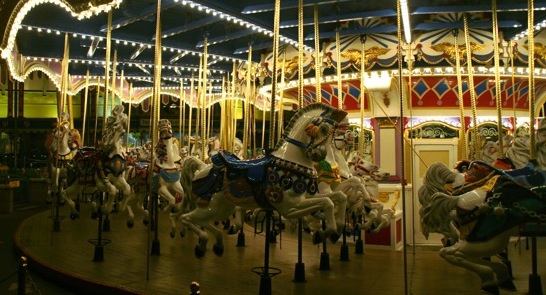 A classic attraction that’s been at the Magic Kingdom since its opening in 1971 will be known by a new name starting June 1, 2010. Cinderella’s Golden Carrousel will change its name to Prince Charming Regal Carrousel.

Disney said the name is changing to “further develop the rich storylines in Fantasyland and help tell the rest of the Cinderella story”. A Disney spokesperson said there are no other name changes planned for Fantasyland beyond the already announced Fantasyland Forest expansion. 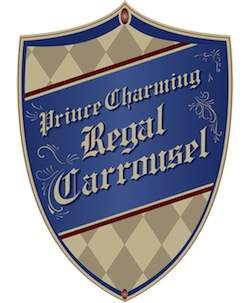 “Following their fairy-tale romance and happily-ever-after wedding, Cinderella and Prince Charming took up residence in Cinderella Castle. With peace throughout the kingdom, Prince Charming had time to practice for jousting tournaments. In the countryside near the castle, he built a training device of carved horses, on which he could practice the art of ring-spearing, a tournament event in which a knight rides his horse full speed, lance in hand, toward a small ring hanging from a tree limb, with the object of spearing the ring. This event was known by various names throughout the lands, but generally came to be called ‘carrousel.’
“The carrousel device drew the attention of the villagers, who wanted to take a turn on this amazing spinning contraption. So Prince Charming had a second carrousel constructed closer to the castle, where everyone could take a spin on this wondrous invention. Instead of a working knight’s training device, however, this new carrousel is more befitting its regal location in the Castle Courtyard – its rustic training horses replaced with ornately decorated prancing steeds adorned with golden helmets and shields, flower garlands, feathers and other festoons. Prince Charming invites one and all to test their horsemanship skills and to enjoy their own happy ending.”

The carrousel is actually a lot older than the Magic Kingdom. It was built by the Philadelphia Toboggan Company in 1917 for the Detroit Palace Garden Park. It was originally red, white and blue, symbolizing the patriotism of the era, with figures of Miss Liberty. It was later moved to Maplewood Olympic Park in New Jersey. When Maplewood closed in 1967, Disney designers discovered the carrousel and completely renovated it, painting scenes from Cinderella in the panels above the horses.

Along with 2,325 lights and the 18 hand-painted scenes on the canopy, the five different sizes of hard-maple horses (18 rows of five horses each) are arranged from the largest on the outside to the smallest on the inside. The band organ that adds music to the ride is part of the antique masterpiece and each horse is completely unique, with its own pattern, color scheme and number on the bridle.

The Rumor Queue: Super Nintendo World will use...

I think this is silly. Over-imagineering!