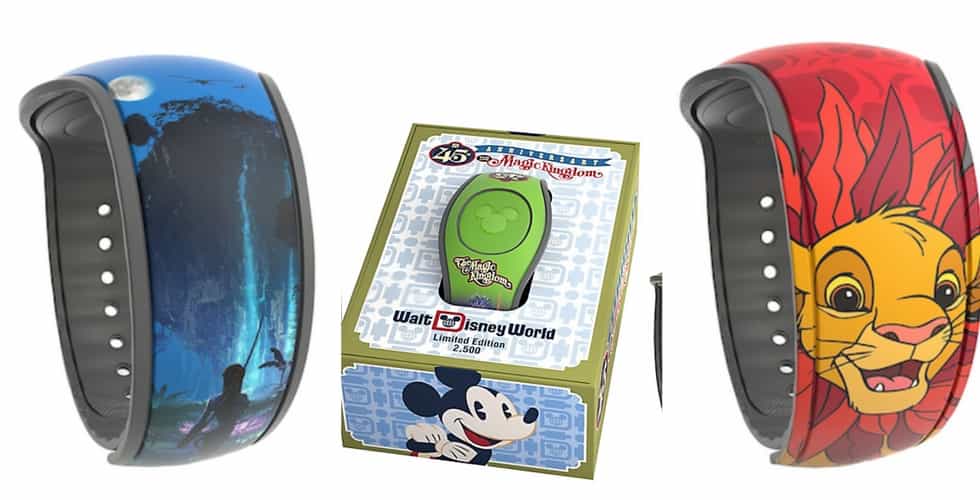 June gave us a few new Limited Edition bands, as well as one new Open Edition.

It’s time once again for the monthly MagicBand Release Recap, and for the month of June 2017, Disney has given us a number of new Limited Edition and Limited Release MagicBands, as well as moved a few old designs over to MagicBand 2.

The big release this month was another Limited Edition MagicBand for Magic Kingdom’s 45th anniversary. This time Disney went with the Enchanted Tiki Room. The band is $32.99 and limited to just 2,500. The special sound this band makes at Magic Kingdom entry and FastPass+ touch points is a singing line from the Tiki Room song. Get it now in the parks or online on the Shop Disney Parks mobile app because it will sell out quickly! These MK45 bands are some of the most popular Disney has made. 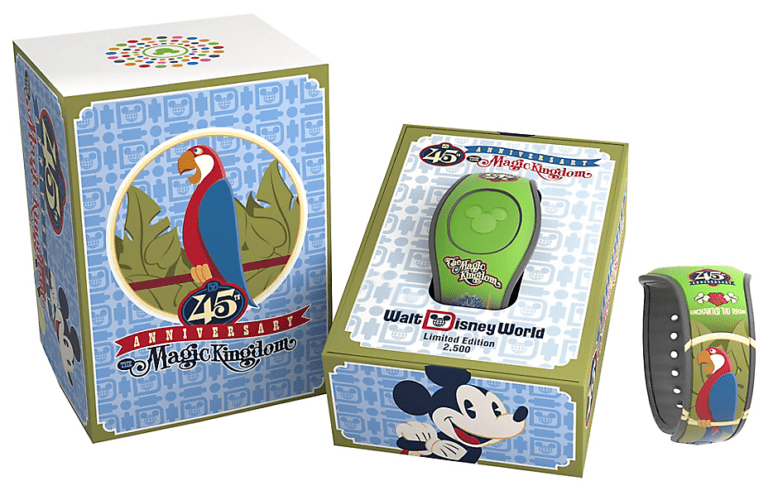 Next up we have a Limited Edition 2,000 MagicBand to celebrate the release of the new Disney•Pixar “Cars 3” movie. It comes in a colorful box, with graphics all of the way around, and embossing on the front. It’s also one of the more limited bands to be released recently, at just 2,000, so this one may sell quickly as well. It’s $32.99, and I don’t yet know what special effects this band makes at touch points, but we can assume it’s a Cars related sound. You’ll be able to see and hear the effects at theme park entry points throughout Walt Disney World. You can find this band in the parks or online on the Shop Disney Parks mobile app. 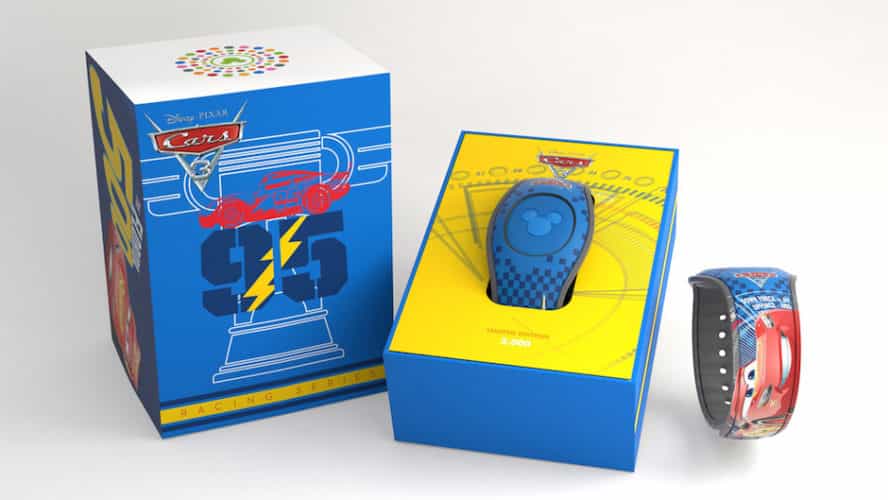 The final Limited Release this month came towards the end of the month, and is another Pandora: The World of Avatar MagicBand. The original opening day purple Bioluminescence LE MagicBand and the Annual Passholder opening day MagicBand both sold out incredibly fast, so Disney is trying to milk the hype as much as possible right now. This band features Pandora at night and comes in a very dark and beautiful black box, unlike any ever released before. It’s a limited edition of 5,000 and because it’s so new, I haven’t yet heard or seen the special effects. You can try it for yourself in Disney’s Animal Kingdom after you purchase this at Windtraders on Pandora. Rumor has it another Pandora band is also in the works, so watch for that one soon as well. 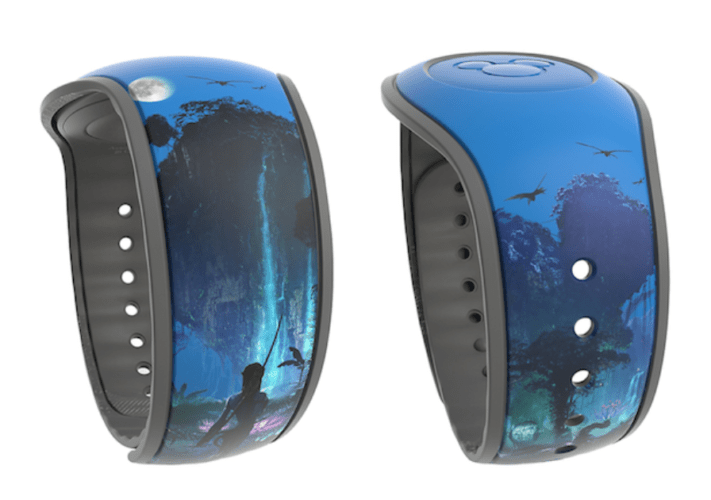 The latest Limited Edition MagicBand for Pandora – the World of Avatar.

For you DVC (Disney Vacation Club) members out there, a new On Demand Limited Release MagicBand is available at the Co-Op Marketplace in Disney Springs. It’s a very neat Mickey Mouse Moonlight Magic event MagicBand. These special events, for DVC members only, take place throughout the year. If you go, make sure you pick up this very limited MagicBand made just for you. 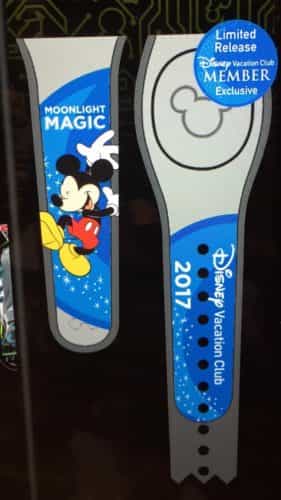 The Lion King is celebrating it’s 23rd anniversary this month, and Disney has released a very cute new Open Edition MagicBand for guests who love the movie and its characters. Featuring Simba and a sunrise on a red MagicBand base color, this is one I know many fans have been looking forward to for a while. You can find it throughout Walt Disney World and on the Shop Disney Parks mobile app for $22.99 and should be available for the foreseeable future. 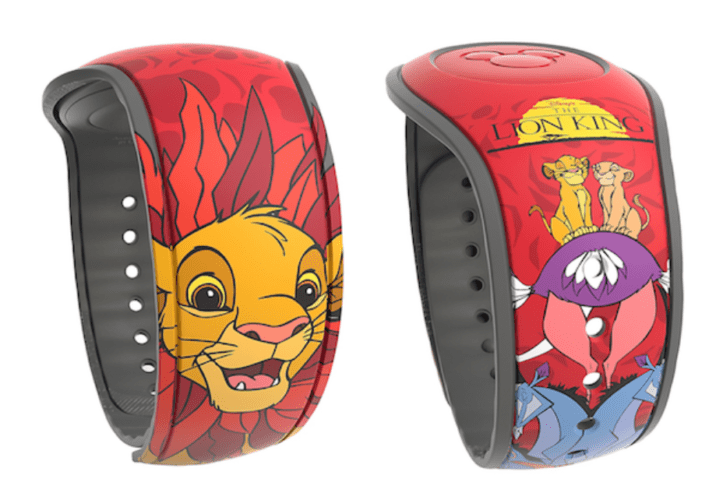 The Open Edition MagicBand for “The Lion King.

Finally, in other news, more original graphics have been moved to the MagicBand 2 style. This includes Castle Fireworks, Belle in yellow, red Stromtrooper, Droids and Han/Chewbacca Limited Release. And, as a last minute breaking story this month, all MagicBands you purchase in the parks are all now pre-set to “Link It Later” mode (which is now being called “Link It Now”). For details on this change to make purchasing MagicBands easier than ever, check out my website. I’ll see you next month!
• Ethan C. Allen owns and runs MagicBandCollectors.com, a hobby site dedicated to the collectability and technology behind Disney’s MagicBands and MyMagic+. A software developer originally from Seattle, he now lives right behind the Magic Kingdom with his wife and two kids. Ethan is also the CEO and owner of Sort It Apps, a mobile app business dedicated to helping people manage and value their collectables and collections. In his free time he also enjoys baseball and beaches.