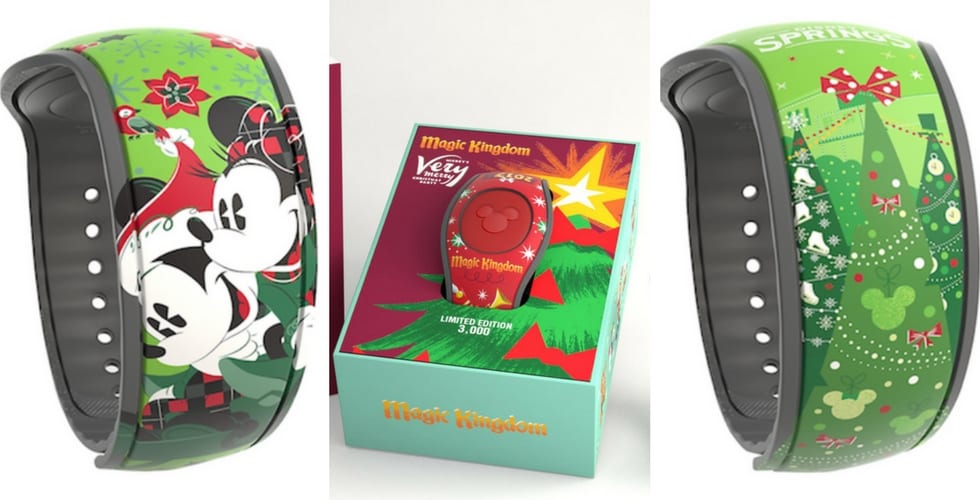 This month’s recap includes a few new holiday designs to get you in the spirit of the season.

It’s time to talk about MagicBand releases for the month of November 2017. There have been a few seasonal releases for the holidays, as well as bands for movies and an attraction as well. The big news, though, is the availability of a brand new color!

The new solid, all-black MagicBand has been released for $12.99. You can find it resort-wide and online, and it is the first new solid color since purple was released over two years ago. At this time, it’s for purchase only and can’t be chosen as a free MagicBand color for resort stays. Now we’re just waiting on a solid color teal, white, and light pink (more on that color next month) to appear!
At the beginning of the month, a surprise Pandora Limited Edition 5000 MagicBand was released. This is the fifth limited band since the land opened in Disney’s Animal Kingdom, and this one is themed with explorer patches. The cost is $32.99, and it can be found online at Shop Disney Parks and in Pandora at Wind Traders. I’m curious as to how long Disney can ride the Pandora MagicBand hype, as they keep releasing band after band. I’m not yet sure what the special effects are of this band, so I’ll keep you posted once I find out. 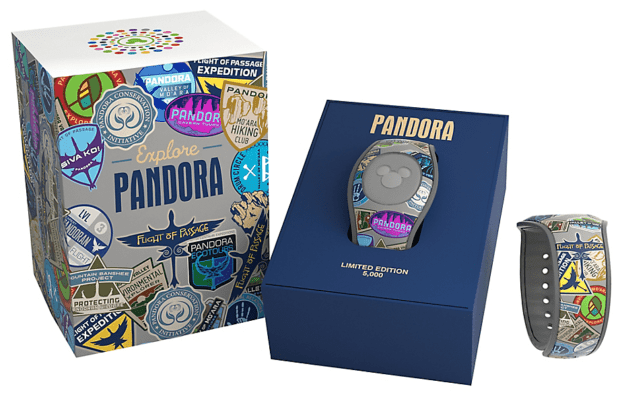 For seasonal MagicBands, there were three bands released this month. One was a green Limited Release Christmas themed band, featuring Mickey and Minnie Mouse on the front and the castle on the back. This band is $27.99 and will be available until the end of 2017. 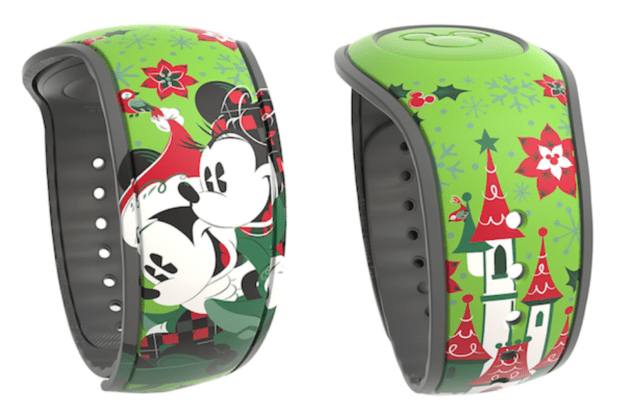 The second band was this year’s 2017 Mickey’s Very Merry Christmas Party MagicBand, limited to just 3000, which is a smaller number than previous years. It includes the logo of the party for the year, and comes in a themed box. The special effects that this band makes at touch points is somewhat disappointing, as it’s just a simple jingle with red lights. You can only buy this band at Mickey’s Very Merry Christmas Party in Magic Kingdom for $32.99. 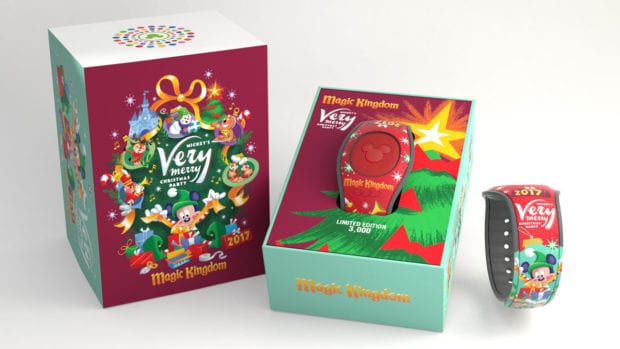 The final seasonal band celebrates an area of Disney that has never been on a MagicBand before: Disney Springs. This green Limited Release, available at Pin Traders and online, is $27.99. Again, this will only be available until the end of 2017. 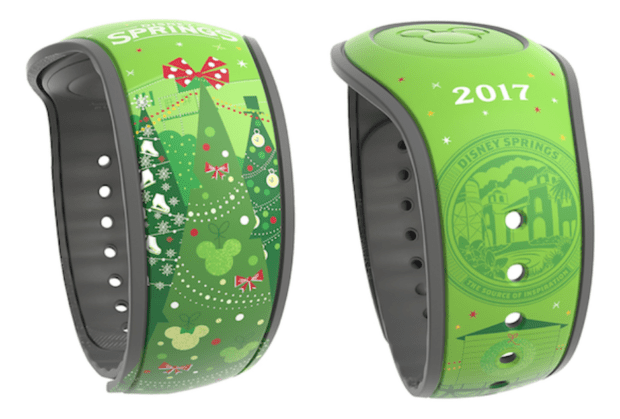 The Seas with Nemo & Friends is a ride in Epcot, and now it has it’s own Limited Release MagicBand for $27.99. I personally hope Disney continues to make more MagicBands for attractions, as I don’t feel that they have done that enough. 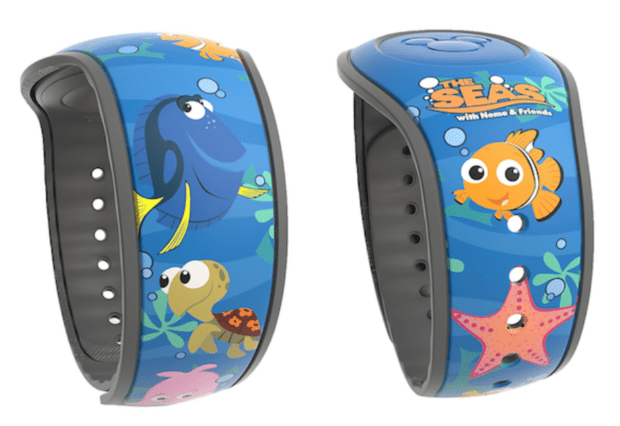 An awesome black Limited Edition MagicBand is now available for the critically-acclaimed Disney/Pixar movie “Coco.” It’s a beautiful band to match an equally beautiful movie, and is limited to just 2000 made for $32.99.
This band is going to be very very rare in the years to come, as it’s already sold out in most places. You can find it on the Shop Disney Parks app and website today, as well as in the Magic Kingdom. The band also does a cool effect at entry touch points, playing the sounds of a strumming guitar. Seriously, this is a must-have if you enjoyed the movie. 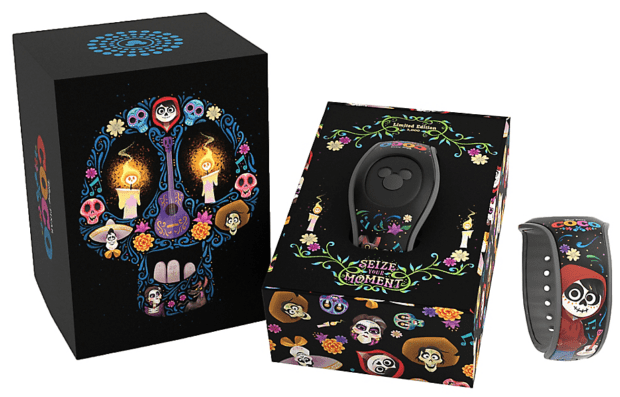 Walt Disney’s birthday was Dec. 5, and at the end of November, Disney released a Limited Release Walt MagicBand with his photo on it. I’m not sure how long these will be around, so if you are a Disney history buff, you need to grab one now. This band runs for $27.99 in the parks or online. This is the first Magicband to ever feature Walt. 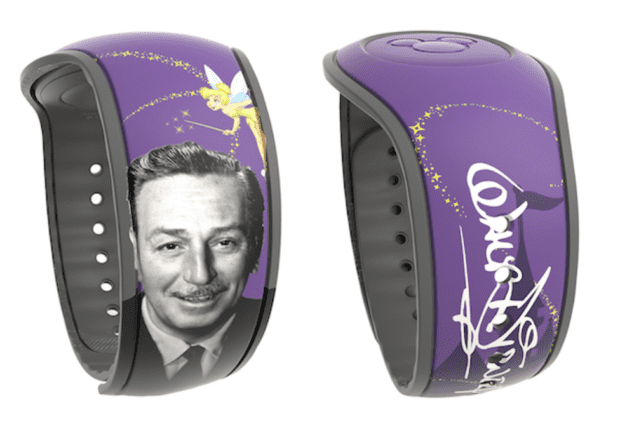 In other news, there was also a new Frozen Sweater design band released at the MagicBand On Demand stations, as a well as an Open Edition band for the Disney animated film, “Aladdin.”
Coming up, December is another loaded month with news, including the release of the new Star Wars: The Last Jedi movie and some bands to match, but we’ll get to those in next month’s column. Until then, keep an eye on Attractions Magazine for updates. Check out last month’s MagicBand Release Recap here.

We want more Muppets in the Disney...