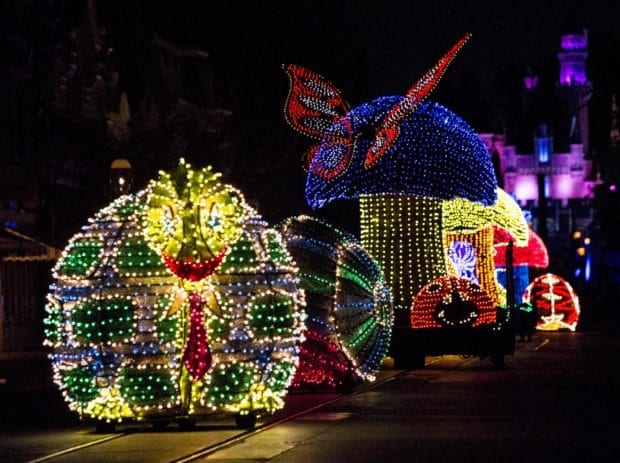 The colorful after-dark parade premiered at Disneyland in 1972. Its last Disneyland Park performance was in November 1996. It ended at Disney California Adventure Park in 2010 when it headed to Magic Kingdom at Walt Disney World until 2016.

Accompanied by Disney tunes interwoven with the “Baroque Hoedown” synthesizer soundtrack, the Main Street Electrical Parade brings a variety of Disney stories to life in parade floats covered in approximately half a million twinkling lights. Mickey Mouse, Minnie Mouse and Goofy lead the way and Cinderella, Peter Pan, Snow White, Pinocchio and Alice in Wonderland are among the characters whose stories unfold along the parade route. Tinker Bell now appears with other fairies on the Peter Pan float.

The Main Street Electrical Parade was performed more than 3,600 times for more than 75 million guests during its original run at Disneyland. The enduring popularity of the parade led to the creation of Electrical Parades at Tokyo Disneyland, Disneyland Paris and Walt Disney World in Florida.

Below you can see our videos of the parade’s final performance at Walt Disney World from 2016, a behind the scenes look when the parade came to Disney World, as well as the version currently showing at Tokyo Disneyland. Also watch the Jan. 26, 2017 episode of “Attractions Magazine – The Show” for more about the parade’s return