Manta Opens Early to Guests at SeaWorld – Review and Photos 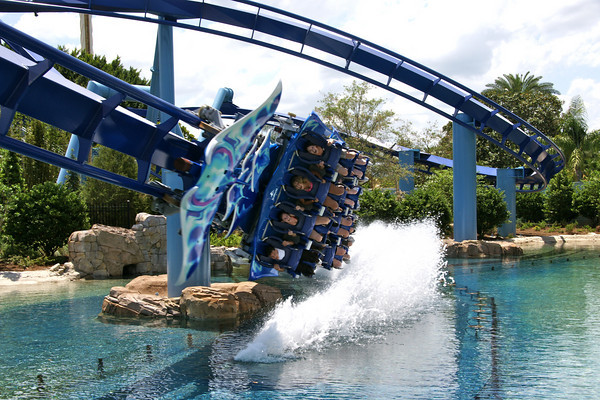 Manta, SeaWorld newest roller coaster, opened 16 days early to a crowd of park guests eager to ride Orlando’s next great thrill ride. The attraction is the first “flying” coaster to come to Orlando, offering a unique angle on the world for its riders. 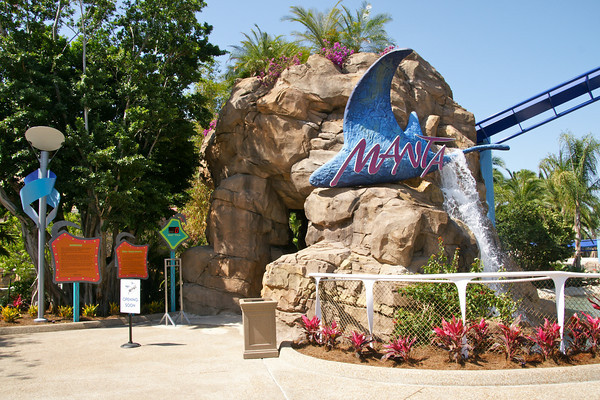 It’s apparent from the moment you enter the Manta queue that the attraction is much more than a thrill ride. The entrance is neatly tucked away inside this rock work that looks like it’s been there since the park opened. In fact, the entire area surrounding Manta is so well integrated into SeaWorld that you’d never know it was a new addition. 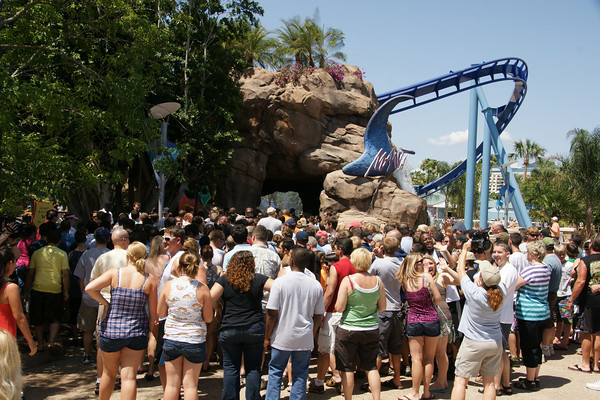 A hoard of eager guests showed up for the noon public opening of Manta. Despite the large amount of people ready to ride, the largest posted wait time that I saw was just 40 minutes. Moreover, Manta’s queue is so well-designed that you never feel like you’re actually waiting in line as much as browsing through a well-themed aquarium setting. 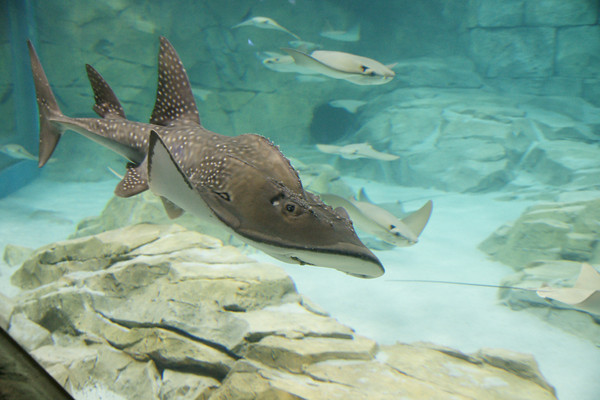 Tucked away inside the queue are waterfalls and numerous tanks filled with different species of fish and, of course, rays. While it is wonderfully comfortable inside the mostly-covered, dimly-lit, and climate-controlled queue, the highlight of the walking experience is easily the tank filled with hundreds of rays (pictured above), which endlessly circle, following each other. This tank not only serves as an excellent exhibit that allows for up-close viewing of these undersea creatures, but also works doubly as a preview for the ride to come. That is, watching the rays gently glide through the tank gives soon-to-be riders a chance to get a sense of how a ray moves – a sense that is duplicated on the roller coaster. 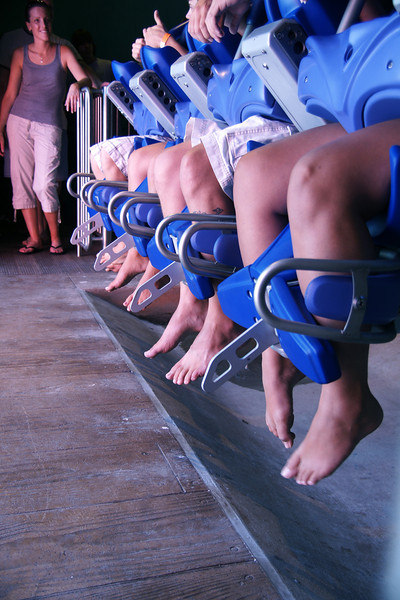 Following a relaxing stroll through the queue and exhibits, guests climb stairs and board the coaster cars in a standard upright and seated position. Anyone who has ridden a floor-less roller coaster before will notice a major difference upon sitting in one of Manta’s seats: the foot harnesses. 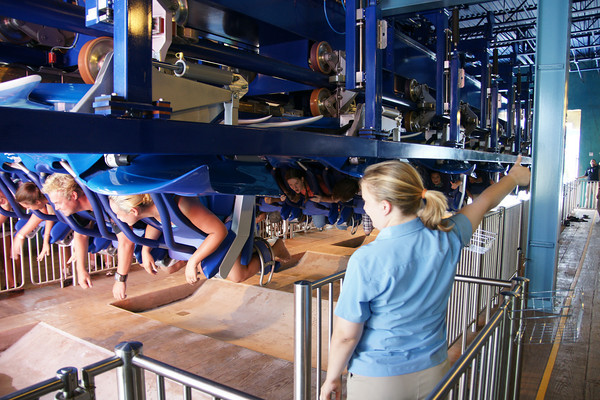 Most floor-less coasters, like SeaWorld’s Kraken, allow riders’ feet to float freely in the air while riding, but Manta restricts leg movement and for a good reason. Guests quickly understand that reason upon being pulled backward into a horizontal position.

At first, the feeling of facing directly toward the ground is a bit startling. Riders feel the pressure of their own weight pushing back against them as the padded harnesses hold them in. It feels secure, but initially uncomfortable, especially while immediately staring at the ground. But once you lift your head and look straight in front of you instead of down, the feeling shifts from a pull downward to a desire to fly forward, unhindered by Earth’s natural physics.

Upon leaving the station and heading up the lift hill, a moment of relief is offered as riders are returned to a semi-upright position, allowing blood to return to its normal places in the body. But all that changes once the top of the hill is behind you and you begin down the first of many twists and turns. 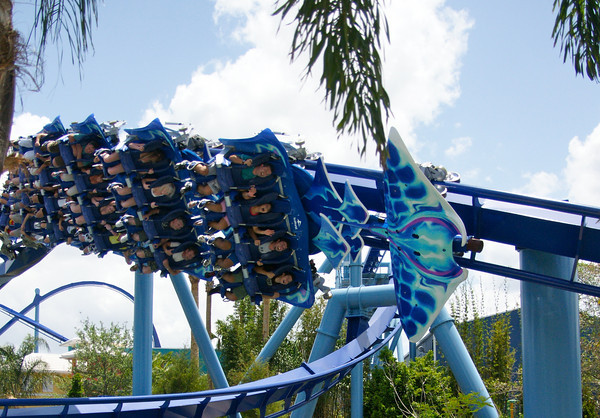 Manta was my first experience on a “flying” roller coaster. Prior to soaring over SeaWorld, my coaster-riding experiences all involved sitting or standing, not lying down. As you would expect, riding underneath a track with absolutely nothing blocking your view of the world zipping by around you is an exhilarating experience – and certainly a new one to Orlando.

My first journey on Manta was in the back row, as I had heard from many people that it was the most physically intense. For comparison, my second trip was in the front row, as that’s generally the row with the least physical forces exerted on riders and the most visual impact. After riding the two extreme positions on Manta, I can safely say that it is now both the most intense and most visually appealing roller coaster in Orlando. 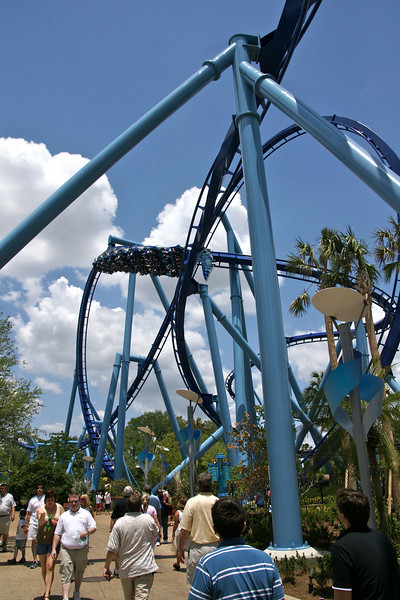 While riding a roller coaster, I have never felt anything quite like pressure exerted on me during Manta’s pretzel loop while sitting in the back row. The loop, aptly named for the fact that it is shaped like a pretzel, occurs very early in the ride and was definitely not expected. I’ve been on hundreds of coaster loops in the past – indoors, outdoors, tall, short, twisting, non-twisting – but never one as forceful as this one was.

In cresting the top of the loop (riding underneath the track on the inside of the loop), riders have no choice but to stare straight at the track ahead, curving underneath and out of view. The lightweight feeling of flying over that uppermost arch quickly becomes the sheer opposite as the car rounds the vertical corner sending you on a trip toward the ground, exerting extreme forces on you all the while. It’s a uniquely breath-taking experience (literally) that I would only recommend for those looking for Orlando’s newest extreme thrill.

Riding around this loop in the front row relieves most of the extreme pressure and allows for a much more scenic trip around the loop, enabling you to focus less on remembering to breathe and more on the beautiful water and greenery that surrounds Manta.

For the remainder of the ride, both in the front and back rows, the experience of flying took over once again and while there are several more inversions, none are nearly as extreme as the initial pretzel loop. Instead, the impact of feeling like a superhero (or perhaps a ray underwater) is what remains in my memory of the new attraction.

I’ll need to ride Manta a few more times before deciding if it is Orlando’s best roller coaster. I adore the Incredible Hulk Coaster at Universal’s Islands of Adventure, which has stood as my favorite since it opened – and that’s something not easily beaten. I’ve ridden the Hulk well over 50 times and Manta only twice, but the combination of the extreme thrill of the pretzel loop and the unmatched feeling of flying may place Manta at the top of my list and will surely bring coaster enthusiasts and thrill seekers to SeaWorld Orlando to check it out.

While Manta is open to the public now, it may close periodically throughout each day as they continue to adjust it leading up to its May 22 official grand opening.

Be sure to visit our photo gallery for more images from Manta’s early opening day.

Coming up in our Summer 2009 issue of Orlando Attractions Magazine, we’ll have a more in-depth look at how Manta came to be. Subscribe today to make sure you don’t miss it.

We’ll also have a video from Manta’s opening day available soon, so keep checking back.

Amazing review on the new Manta attraction! Thanks for sharing.

The roller coaster is amazing, BUT DO NOT PAY FOR THE SEA LION TOUR. I would give it no stars, but that was not an option. Save your money because you will not be up-close with a sea lion like the title and the picture suggest. First, you go to Pacific Point Preserve and they tell you the difference between a sea lion and a seal; which can be read on the signs around the exhibit. Next, you go to where the “Clyde & Seamore” show takes place. You are asked to sit in the first two rows and then are quickly taken up to the tank, a group at the time to have your picture quickly taken. You are not allow to look at the sea lion (you keep your back towards him) and have to take a large step forward before you can walk back to your seats. Then you head back to Pacific Point Preserve where you are given a bucket of fish to feed them with everyone else. Just save your money and get to the show early to sit in the first two rows and spend $20 and get five trays of fish to feed the seals/sea lions at Pacific Point Preserve.