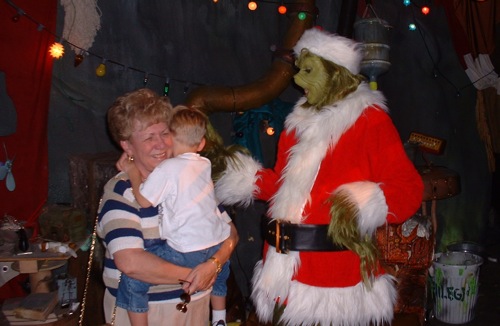 Universal Orlando Resort has released their plans for the holiday season. These include some new things and returning favorites. Most events run Dec. 1 through Jan. 1.

KidZone Holiday Show
Join your character friends as they dance to holiday hits in a live show.

Barney’s Christmas Show
Join Barney and his friends for a magical sing-along, clap-along show at A Day In The Park With Barney.

Blues Brothers Christmas Show
Catch them live, performing holiday favorites like “Santa Claus is Coming To Town” and “Blue Christmas” with snow on Delancey Street at the end of each show.

Universal 360 – A Cinesphere Spectacular
Dec 26 – Jan 1
Through the unique “Cinesphere” technology you’ll experience the sights and sounds of some of Hollywood’s biggest films projected onto huge spheres in the Universal Studios lagoon, plus one of the largest laser displays in Florida, dazzling pyrotechnics and more.

The Return of Grinchmas
To mark the 50th Anniversary of Dr. Seuss’s beloved Christmas story, Universal is pulling out all the stops on a brand new, live musical starring The Grinch. This retelling of “How The Grinch Stole Christmas” will have you singing and dancing along with Dr. Seuss’s classic holiday tale. Then stroll around the Who-ville Wonky Tree Lot and take in the whimsical new decorations.

Meet The Grinch
Get an autograph, shake his hand, or have your photo taken with the mean, green one himself.

All-New Grinch Character Breakfast
Start off your morning at Universal with a Seussian breakfast! Join The Grinch and Friends for a scrumptious meal and more. Not included in theme park admission.