Last night, April 4, 2009, I attended the MC Hammer show at Universal Studios’ Mardi Gras as my very first Mardi Gras concert experience. After hearing the horror stories of the massive crowds that showed up for Kelly Clarkson’s show last week, I was worried that I’d end up too far away from the stage to even see Hammer perform. Fortunately, it appears that MC Hammer isn’t nearly as popular as Kelly Clarkson, though I’d personally rather listen to U Can’t Touch This ten times in a row than hear Since U Been Gone even once.

When I arrived at the Universal Studios concert area at a little before 8 p.m., here’s what the scene looked like: 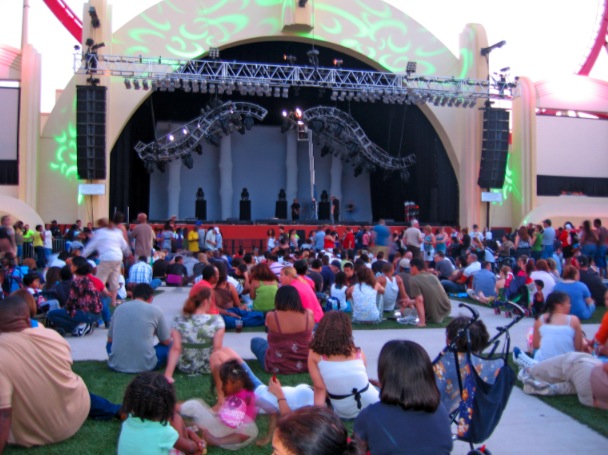 There was plenty of room to walk around, sit on the fake grass, or stand near the stage and wait for the concert to begin. As night fell, the crowd began to get larger, with nearly everyone standing and inching closer to the stage by around 8:30 p.m.

The Mardi Gras parade music began playing over the stage loudspeakers at 9 p.m., though we couldn’t actually see the parade until 9:30 p.m. After that passed by, a couple of Mardi Gras people came out on stage and threw beads into the crowd for 15 minutes or so. Finally, around 10 p.m., it was time for MC Hammer to come out.

The atmosphere of this concert was very casual. Hammer strolled on stage with no introduction or theatrics. Once the DJ hit play on a backing track on his laptop, the show began and Hammer, along with a ton of background dancers, blazed through three or four songs that I didn’t recognize. Even so, it was a blast to see MC Hammer in person, dancing up a storm. He seemed very laid back and simply wanted to have fun with the performance. After all, it was in a theme park – no need to take it too seriously! He was performing for park guests of all ages, which is not likely his typical audience.

Between songs, MC Hammer and the dancers walked around (or off) stage, resetting for the next track. Occasionally Hammer talked to the crowd, either introducing an upcoming song or saying how excited he was to be in Orlando. But at that point everyone close to the stage (includying myself) had been standing there for two-plus hours and were itching for some hit songs that we would actually recognize.

In that regard, Hammer did not disappoint. Ultimately his set list included 2 Legit 2 Quit, Pray, Pumps and a Bump, and even Addams Groove from The Addams Family film soundtrack (a song I had forgotten ever existed but was happy to hear it live).

Before Addams Groove, Hammer introduced his son along with a large group of teenage dancers who pop-and-lock’ed through the entire song while Hammer took a spot in the background rapping the song’s lyrics.

But the song everyone wanted to hear is the one that MC Hammer is most famous for recording: U Can’t Touch This. At around 10:50 p.m., the show came to a halt when Hammer came down off of the stage and headed toward the audience. He began personally selecting audience members, pulling them over barracades and telling them to walk up near the stage. After nearly ten minutes of silence and confusion by most of the audience, all of those selected (there must have been at least 100 people) were told to head up onto the stage:

Finally, Hammer joined them up on stage and made sure they all knew exactly what was about to happen by simply facing the on-stage crowd and uttering “My my my…” into the microphone, the opening words to U Can’t Touch This. The group began rapping back to him the first few lyrics, ensuring to him that they were ready.

What came next was a hilariously bizarre performance of U Can’t Touch This, which I bring you here for your viewing enjoyment:

This was definitely the highlight of the night, especially with the Hammer dance-offs / instructionals throughout the song. I’m quite jealous that I wasn’t in the right spot to get pulled up on stage.

Overall, this was one of the least serious concert experiences I have ever been to, but that’s what made it great fun. MC Hammer and his crew were clearly there to have a good time and involve a theme park audience in the performance. I’ve read some comments about this show that complained that it was unorganized, that Hammer wasn’t actually rapping, and that the recent Barenaked Ladies show at Universal Mardi Gras was much better. I have to disagree. This experience was all about seeing MC Hammer live and in person and nothing more. I grew up listening to Hammer’s music and to see him perform his hits live and Hammer-dance around the stage was something I thought I’d never get to do. I also listened to bits of the Barenaked Ladies show at Universal (they released an audio recording of it on their Web site) and I thought they sounded like a bunch of amateur comedians rather than a band – I’d rather see MC Hammer any day.

It was definitely Hammer Time in Orlando last night and I’m happy to say that I was there to witness it.

Here are a couple more photos I took at the concert:

Stars in the Parks: Brad Garrett