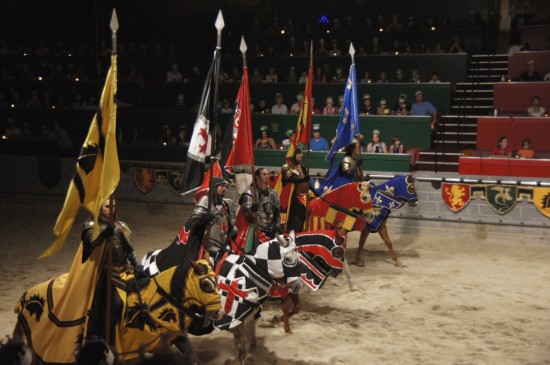 Medieval Times Dinner and Tournament, known as North America’s longest running dinner attraction, is premiering their new first new show since 2007 on June 26, 2012. The show will offer many new elements while the most popular traditions remain.

Almost two years in the making, the new show will feature even more audience favorites such as live jousting, sword fights, horsemanship and falconry. Guests are taken back in time and encouraged to cheer for one of six “Knights of the Realm,” named after historic regions of medieval Spain.

“In a sense, we’ve gone back to the basics,” said Leigh Cordner, Medieval Times creative director. “Guests will see a celebration of the horses along with more action and elements of high drama. The streamlined plot allows more concentration on the action.

After the opening, guests will witness intricate battles, which are precisely planned sequences that have been practiced daily. With authentic weaponry and enhanced armor, the new production presents non-stop action tied to the tempo of the music. And while there’s still a general theme of “good versus evil” throughout the show, guests will see much more of what they like most about the show – fight scenes.

Here’s a look at the current show:

A look at Medieval Times Dinner and Tournament in Kissimmee, Florida

To purchase tickets online or for show times, visit www.medievaltimes.com or call 1-888-we-
joust.