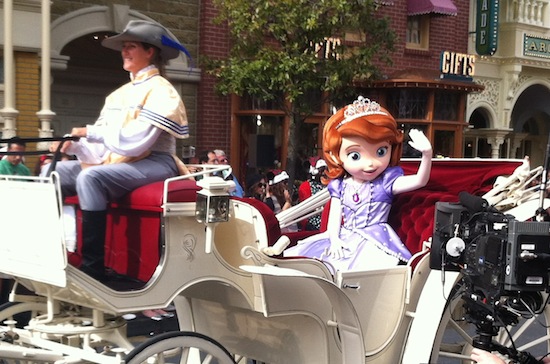 By Kenny “The Pirate” White, Photo by Banks Lee

There’s one thing that Disney knows and does better than any other entity – Princesses. Princesses rule the Magic Kingdoms of Disney theme parks around the world. People are known to wait an hour or longer to meet with their favorite princess. Walt Disney World currently offers regular meet and greets with 11 “Princesses”:

This past weekend, in the Walt Disney World’s Magic Kingdom, Disney introduced its newest princess. Her name is Sofia the First. Sofia appeared in character form for the first time in Saturday’s filming of Disney’s Christmas Day Parade that will be aired on ABC on Christmas Day. Will this soon lead to Sofia appearing in Disney’s theme parks? Handy Manny first appeared in the same parade in 2006, but didn’t appear for meet and greets in Hollywood Studios until 2010. There’s no word when or if Sofia will begin appearing regularly.

Sofia will be part of an upcoming Disney Jr TV series of the same name that premieres in January 2013. The series was given a special introduction on Nov. 18 a one-hour special. Sofia is a girl who comes from an ordinary background and is thrust into her new role as a princess when her mother marries the King Roland II of Enchancia. King Roland already has two children that become Sofia’s step family, their names are Amber and James. Sofia is trained in her new royal role by three characters who should be familiar to Disney fans, Flora, Fauna and Merryweather (The same fairies who assisted Aurora during her time in hiding as Briar Rose in the movie Sleeping Beauty.). In addition to the three fairies, Sofia is given a royal steward named Baileywick. While using a magic amulet to communicate with animals, a nod to Snow White, she must learn the princess graces of loyalty, kindness, honesty and generosity.

Let’s hope it doesn’t take four years for her to begin appearing in the theme parks!

• Kenny “The Pirate” White is an avid fan of the Orlando theme parks. He specializes in Disney character and entertainment schedules and information. He and his family have met more than 220 different Disney characters and numerous other theme park characters over the years. Kenny and his family visit Orlando regularly. He currently lives in Florence, S.C. You can visit his blog at kennythepirate.com.

*Error – It was 2007 when Handy Manny first appeared at Hollywood Studios. 2010 is when he took over in Hollywood and Vine character meal. Apologies!

I really appreciate that Disney organizes such great events for kids. I have already prepared a list of activities for my children because the Christmas period is approaching and I was so happy when I discovered a list of events that will take place this month here in Toronto with Disney on Ice as one of the attractions prepared for kids. My kids love Disney and they’ll definitely enjoy this kind of trip. What a wonderful present I found without having to wait long hours in the supermarket. 🙂

I DONT LIKE IT AT ALL IT’S SO STUPID AND IT TEACHES KIDS TO DATE PEOPLE LIKE THAT BOY WITH THE TOWEL ON HIS HEAD IS IN LOVE WITH SOFIA AND PRINCE JAMES AND ROLAND THE SECOND ARE JEALOUS OF HIS KINGDOM!!!!!!!!

Please were can my 3 yrs grand daughter meet and have tea party dress up with Sophia as seen on t.v.

Were can my three year old grand daughter meet sophia as seen on t.v. for a party dress up .please let me.thank you.