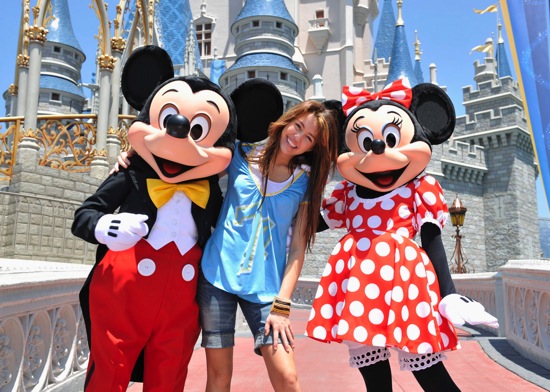 Singer/actress Miley Cyrus poses with Mickey Mouse and Minnie Mouse on May 1 at the Magic Kingdom. Cyrus spent Thursday enjoying the Walt Disney World theme park attractions. She’s in Central Florida to perform in the “Disney Channel Games” concert on Saturday night at Disney’s Wide World of Sports complex. The free tickets were given out on a first-e-mail, first-receive basis and are now all gone. I’ll be attending with my family, but unfortunately no cameras of any kind are allowed. Other Disney stars are also set to perform, including The Jonas Brothers and The Cheetah Girls.

Dozens of Disney Channel stars are in town this week taping the “Disney Channel Games,” a made-for-TV, Olympic-style event that will be shown on Disney Channels worldwide in July. The event benefits Make-A-Wish Foundation, Starlight Starbright Children’s Foundation, UNICEF and Boys & Girls Club Clubs of America.

MILEY CYRUS IS SO LUCKY TO PLAY THE ROLE
OF HANNAH MONTANA. I HOPE SHE DONT TURN OUT LIKE BRITANY SPEARS OR LINDSAY LOHAN