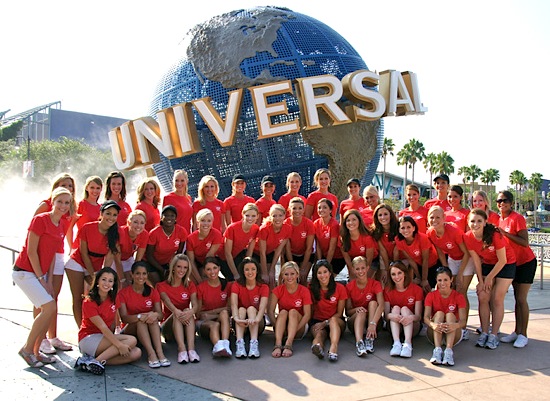 Contestants for the Miss America 2010 pageant got together for the first time for a few hours yesterday (Aug. 12, 2009) at the Universal Orlando Resort, enjoying the many rides and attractions found within the Universal Studios and Islands of Adventure theme parks. 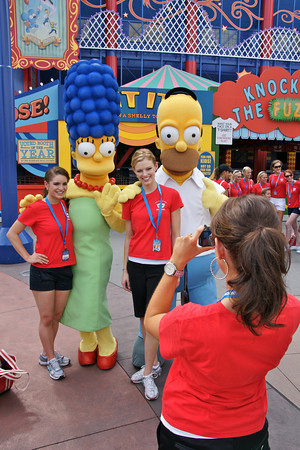 We met the girls just outside the entrance to Universal Studios for a quick photo shoot before heading into the park. While large groups of park goers wearing the same color shirt is not unusual to see in around any of Orlando’s many attractions, it was definitely a uniquely head-turning sight for many guests (and ourselves) to spot such a group comprised entirely of attractive young women.

Following the shoot, we walked through the Universal Studios streets with the group as they began their day of riding the movies. With the pageant world of big hair, sashes, and evening wear temporarily put aside, the girls were ready to take on the arguably equally bizarre worlds of Jaws and The Mummy – though they still had plenty of big smiles and friendly waves to offer.

Earlier this year, leading up to the Miss America 2009 pageant, TLC aired a reality show entitled Miss America: Reality Check. We asked current Miss Florida, Rachael Todd, if they would be participating in a similar show this year. She told us that while TLC had been briefly following them with cameras during their Orlando visit, they would not be part of a new reality series.

While any Miss America fans looking forward to another few episodes of Reality Check appear to be out of luck, we may have the next best thing for you.

Below is a six-minute video bringing you with us as we tag along for the first couple of hours of the girls’ day at Universal Studios. (And guys: I’m willing to bet you’ll enjoy this video too, even if you’re not a Miss America fan.)

This was the first time this group of Miss America contestants had all spent time together and it seemed like they were getting along very well. They were excited to be in the theme park capital of the world and enjoying the all of the sights and sounds around them.

When we left them, they were on their way to Men in Black: Alien Attack, removing dangling hoop earrings and loose sunglasses after being warned that the ride tends to spin. It seemed like the day at Universal was going to be filled with nothing but fun and friendship – but I imagine all that will change when January 2010 rolls around and it’s time for the girls to put their pageant faces on in their quests for the title of Miss America.