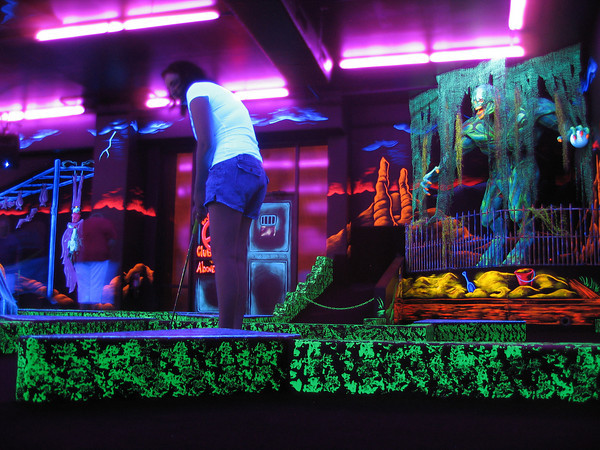 The grand opening of the newest addition to Orlando’s mini-golf courses, Monster Mini-Golf, took place on Friday, July 24. The indoor course is located around 15 minutes north of the Magic Kingdom in the city of Winter Garden.

While the location may be a bit out of the way from your usual Orlando tourist attractions, Monster Mini-Golf still packs in plenty of excitement and fun into its 9,000-square-foot facility. It features 18 holes of uniquely-themed blacklight-filled miniature golf, a video arcade, and two ghoulishly-themed party rooms. 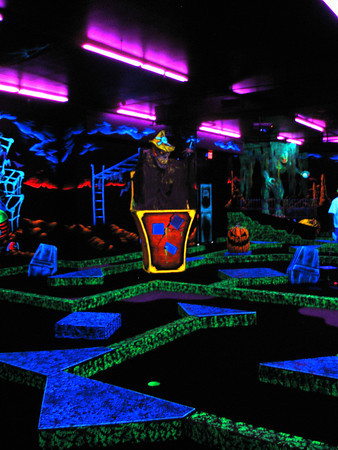 Overall, I highly recommend the Monster Mini-Golf experience. While the course’s footprint is relatively small, it is tightly-wound and offers interesting paths around each corner. The difficulty of each hole is just right, ranging from somewhat easy to fairly hard – but without frustration. Putting along strips of black carpet-like material rather than the usual greens adds extra flavor to the course. The numerous visuals found throughout the course layout are intriguing and often surprising. Players waiting for their turn won’t ever find themselves bored while letting their eyes wander from creature to creature.

If I had to find something negative to say about Monster Mini-Golf, it would be the selection and volume of the music playing throughout. I was expecting to hear a variety of spooky music (the Monster Mash, the theme song to Halloween, etc) while golfing. Instead, the playlist included of Madonna and Van Halen. Frightening to some, but in an entirely different way. There is a booth featuring a live DJ on the course, so the music may depend on who’s picking the tracks at the time.

The tunes were also cranked to 11 when I arrived, though they did turn the volume down a bit upon request. It was opening day and I have a feeling they’ll find the most comfortable and appropriate volume over time. In addition to playing music, the DJ also interacts with golfers, sometimes holding dance contests or giving out prizes. It’s a welcome addition to the usual mini-golf experience.

(Shameless plug: If you want to compare this course to the rest of Orlando’s many mini-golf courses, you won’t want to miss our upcoming Fall 2009 issue, so subscribe to Orlando Attractions Magazine today to be among the first to receive it.)

Although Monster Mini-Golf is filled with, well, monsters, even the most timid visitors will find a good time there. Only a handful of the monsters are on the creepy side. The rest are rather playful. When I visited, I saw a number of elementary-school age kids having a blast.

But don’t take my word for it. See it for yourself in the video and pictures below.

Visit monsterminigolf.com to find out more information about the course and its location.

Join us for an ‘Early Night Live’ and...

The party rooms are definitely one of the highlights. I’d love to go to a party there!

There is a Monster Golf close to where I live and I was really unimepressed with it. The actual course is very basic (every hole except maybe a few are flat and you just have to avoid different barriers) and there are not even barriers between holes (if you hit it past the hole you are on, you can end up on the next hole). However, I am not sure if this is the case at the Winter Garden location. Ya it hasblack lights and a few interesting things to look at, but as a miniature golf course, it was boring. This is just my opinion and maybe (hopefully) the Winter Garden location is better!

Pete – What you said is true. The course is flat and the holes do run into each other. But what it’s lacking as a mini-golf course is made up for by the ambience, in my opinion.

Of course, I am a huge fan of Halloween and all things spooky, so just the notion of a monster-themed mini-golf is enough to make me happy. Plus, it’s nice to be able to get out of the heat and play some miniature golf down the street from my house.

Point taken. I think the idea is great but I feel like there was so much more they could have done given the theme. I guess maybe I went in with too high of expectations.

I was hoping for maybe a little interaction with the monsters reacting when balls went into the hole. Maybe they did, but the music was so loud (as you mentioned) that I couldn’t hear them.

Overall, I think I was just expecting it to be a little more elaborate than it was.

I remembered there was a black light lit indoor mini golf in the (mostly empty at that time) Festival Bay Mall and the website proved me right http://www.puttingedge.com/index.php?option=com_content&task=view&id=88
It looked very sad and as a tourist I rather mini golf at the large waterfall minigolf places in Orlando than in a mall.

looking at locations, there is one just north of Tampa in New Port Richey.. I may have to go visit there after hearing of your experience there.

We rode the first roller coaster at...