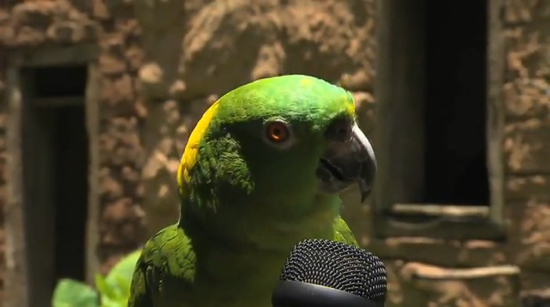 The Flights of Wonder show has been performed daily at Disney’s Animal Kingdom for years now. But you may not have known how famous one of the stars of the show really is.

Groucho, the singing parrot has been named the World’s Best Singing Parrot on the Tonight Show with Jay Leno. He’s also appeared on The Ellen DeGeneres Show and many others. Today he is still one in a million, able to sing seven full songs which include: How Much is that Doggy in the Window?, Camptown Races, Yankee Doodle Dandy, Alouetta and Jingle Bells.

Hatched in 1986 in Kalamazoo, Mich. and raised by Theresa Barylock, Groucho is a yellow naped amazon parrot and his ability to articulate will amaze you. The animal care staff would like for us to warn you that owning a parrot does not guarantee that you will end up with a singing sensation like Groucho. For the most part, parrots chew, bite and squawk loudly.

Here’s another video of him during the show taken by park guest Rex Hughes, Jr.

hello i would love to donate my macaw parrot to disney is there anyone i can contact concerning this,,, thank you