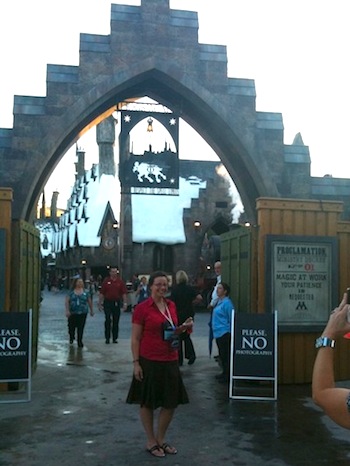 The U.S. Travel Association is in town for their annual trade show they call International Pow Wow. In addition to the trade shows, the big three theme park companies have been hosting exclusive parties for members of the group.

On Sunday night, Disney hosted a party at the Magic Kingdom, which featured a look at the floats from the returning Main Street Electrical Parade. Tomorrow night a party will be held at SeaWorld. But it was last night’s party at Universal that has everyone abuzz.

As expected, the Universal party included a tour of the not-yet-open Wizarding World of Harry Potter in Islands of Adventure. Although we weren’t able to attend, plenty of new information could be found on Twitter during the event, but no photos were allowed. It seemed everything was up and running except for the Harry Potter and the Forbidden Journey ride. But attendees could visit the queue to the ride which takes guests through Hogwarts castle.

Our friends Kyle and Stacy, Smile Ambassadors for the Orange County Convention & Visitors Bureau, have summarized their thoughts via video.

Hogsmeade Village: “There are many shops that you can’t walk in that are still interactive as you walk by. … Tomes and Scrolls has an enchanted quill that magically writes names in a book of future Hogwarts students. … We were told that many of the props in the window are actually from the Harry Potter movies.”
“Butter beer tastes like a mild rootbeer mixed with butterscotch. With a VERY foamy head. Comes regular and frozen”
“Just sent out some post at the Owlry. There are 4 different types of HP stamps to send. It’s pretty cramped in there!”
“Honeydukes doesn’t have many Potter themed items. Every flavour beans. Toads coming soon”

Ollivander’s Wand Shop: “I tried spells with a few wands one of which was to make flowers levitate, but instead they wilted. The man working fixed all my wrongs with his wand. On my third wand I did a spell that made wind blow, music play, and a light glow on me…my wand had chosen me.”

“Just got wands at Ollivanders. The wand chose me! Amazing experience with a shop owner who spends a good amount of time with you. … Two wands didn’t work at first. Tried to cast a spell to levitate flowers and move ladder then music swelled & lights came up. … There was wind in the shop and then my hazel wand with a Phoenix tail inside it chose me! Amazing!”

Dragon’s Challenge: “Before you walk into the castle you walk through a forest with banners advertising the challenge and see the Weasley’s crashed car. … Once you enter the que you walk into the Champion’s Tent with the Goblet of Fire in the center. The goblet has smoke/mist shooting up out of it lit by blue LEDs from inside. You then see the Triwizard’s cup, along with the 3 golden eggs. … Once in the station there are shadows of dragons flying projected onto the tent above you.”

Flight of the Hippogiff: “As you leave the station there is a HUGE animatronic of a Hippogriff on his nest. He bows at the train as you pass by (we of course bowed back).”

Hogwarts Castle: Dumbledore’s “office had amazing detail: tall wooden ceilings, his desk, and Dumbeldore himself (as a really believable hologram) talking to people in line. He warned us that there will come a time when we will have to choose between what is easy and what is right.”

You can read the full write-ups at orlandoinfo.com/smile/follow.cfm

I’m sure more details will be released before the June 18 grand opening. Universal team members will be able to visit each night this week and most fans are assuming there will be a soft open in the next couple of weeks for all guests, although nothing has officially been announced.

Keep checking here for more updates and look for full coverage of The Wizarding World of Harry Potter in the Summer issue of Orlando Attractions Magazine.

Hi! I REALLY Want a wand from Ollivanders too. Can you please answer me and tell me this, does the tip of the wand light? Like from a press of a button??? Please answer me i have asked this question on many websites and i havent gotten an answer

They do sometimes sell wands that light up on the tip. But they don’t always have them. A few weeks ago all they had that light-up was Voldemort’s wand. Earlier this week they didn’t have any in stock that light up. The ones that light up are around $40.