Most watched theme park and attraction videos in 2010 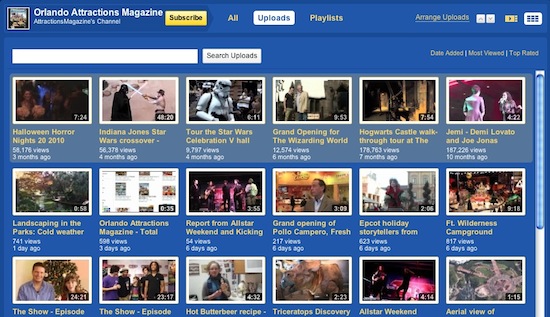 It was a year dominated by The Wizarding World of Harry Potter opening and musical performances. So instead of only looking at the most viewed videos uploaded this year, we’re going to look at the top 2010 videos a couple of different ways.

Yesterday we presented the Top 10 most read theme park stories for 2010. That list only featured a couple of stories that were posted before 2010. But if we take a look at our top 10 most viewed videos this year, they’re all from past years. So let’s start with the most viewed videos among the 300 we uploaded in 2010.

Hogwarts Castle walk-through tour
Besides the three videos above, the rest of the top 10 videos uploaded this year featured The Wizarding World of Harry Potter at Universal’s Islands of Adventure. Instead of posting them all here, I’ll just point you to our Wizarding World video playlist on YouTube.

Now we’ll count down our top 10 most viewed videos during 2010. This list includes all of our videos, whether they were uploaded in 2010 or before. Let’s count them down and list the amount of views each had in 2010.

476,025 views
NASA Launches New Education Initiative With Disney Parks
The liftoff of space shuttle Discovery kicked off a new education initiative between NASA and Disney Parks. A 12-inch-tall Buzz Lightyear action figure was carried aboard the shuttle as part of the partnership to encourage students to pursue studies in science, technology and mathematics.

471,647 views
2009 Dance-Off with the Star War Stars
The 2009 version of the popular Star Wars Weekends show is more popular than all the other versions we have online. I’m not sure if it was the song choices this year or that this one just happened to catch on.

1,682,902 views
Nickelodeon Family Suites Hotel New 4D Movie Experience
The Nick Hotel added a new 4D theater staring SpongeBob and invited us to the grand opening. When we were recording this video on June 24, 2008, little did we know this would be the most popular video of 2010. I wouldn’t call it our best video by far, but I guess it was the most interesting to our YouTube viewers this year. This video has been viewed a total of almost three million times since we first uploaded it.

Subscribe to our YouTube Channel at YouTube.com/AttractionsMagazine to stay up to date with all our new videos for 2011.

The Willis Clan to perform at Raglan...