Movie Review: Disney-Pixar’s ‘Incredibles 2’ was well worth the wait

The world has been waiting for Disney•Pixar “Incredibles 2” to see what damage the Underminer would cause after Dash’s track meet for 14 whole years, and the wait is finally over. I’m usually not a huge fan of plots that involve mind control, but I think this film really executed the premise well, and I honestly enjoyed it more than the original film. 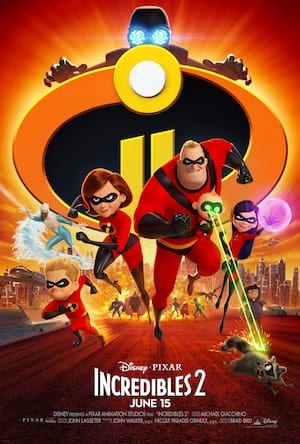 Picking up immediately after the original movie, “Incredibles 2” begins with the fight between the Incredibles and the Underminer. Unfortunately, despite the heroes making a comeback, what they’re doing is still illegal. Their big fight catches the eye of a CEO that is an advocate for super-rights. He contacts the supers in hopes of changing the public’s perception. CEO Winston Deavor (Bob Odenkirk) and his sister Evelyn (Catherine Keener) are publicity and tech geniuses that use their sway to push the supers back into the limelight, starting with Elastigirl (Holly Hunter.) While she’s out fighting the the Screenslaver, Mr. Incredible (Craig T. Nelson) is left to take care of the family. This includes Jack-Jack’s newly discovered powers, Violet’s (Sarah Vowell) boy troubles and Dash’s (Huck Milner) math homework.

The animation quality has obviously gotten much better since 2004. The film looks extremely detailed, especially since the showing I saw was in IMAX. The ’60s aesthetics and classic superhero themes really bring it all together.

I’d also like to quickly mention the Pixar Short before the main feature. “Bao” is a story about a woman who makes a Bao bun that comes to life. I wanted to like it much more than I did, but the target audience of the short seems to be mothers, which I am not.

• “The Incredibles 2” is rated PG, and lasts two hours. It’s available in IMAX, 3D and 4DX. There are no end credits scenes, however there is cool art to look at while the credits roll.

In The Parks
The Incredible Tomorrowland Expo is happening now through Sept. 3 at the Magic Kingdom. Guests can enjoy decorations, music, food and entertainment with the characters, and “convention-goers” dressed in cosplay of the new supers from “The Incredibles 2”.

Over at Disney California Adventure, Pixar Pier is opening the newly re-themed Incredicoaster (formerly California Screamin’.) The new experience features a combination of character figures, lighting and special effects as the Parr family races alongside you to catch Jack-Jack.

Here’s another take on the movie from our reporter Tiffany Mink.