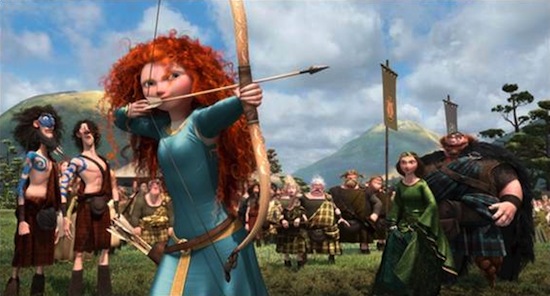 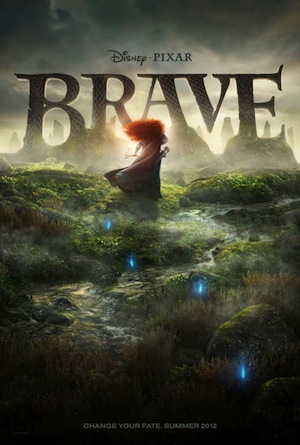 The main character, Merida, is a headstrong princess that has been brought up to be prim and proper, but she still finds time to tend to her wild and free side. She is set to marry one of the three princes from the other noble families in the kingdom. They have to win a challenge for her hand, but she’s not happy with this arrangement at all! She goes away crying and races through the beautiful Scottish woods, where she stumbles upon a magical way to change her fate. She hastily decides to go through with it and a series of dangerous and scary adventures follow. She soon realizes, and regrets, the consequences of her actions. The ancient tragic stories of her country’s history are now a part of her life. She has to hurry and undo what she’s done or forever destroy her family.

The talented Kelly MacDonald, Emma Thomson, Craig Ferguson and Billy Connolly are among the impressive voice actor cast. (Of course, John Ratzenberger provides a voice as he has in all Pixar films.) The movie is rated PG and may be a little too scary for small children. There is also some brief nudity including some bottoms and a joke involving a woman with large breasts that might offend some.

All and all, Brave is a beautiful story about finding your own way in life, with the added lesson that for every choice there is a consequence. It also shows the importance of the bond between family and friends. I highly recommend you see it with those closest to you, (especially mother and daughter) it will mean more to you. Enjoy!

Before the movie begins, you’ll enjoy a new Pixar short called La Luna, and stay until Brave’s end credits roll by for a quick extra scene.

Here’s a clip from the movie:

At Epcot for a limited time, guests can take part in the Highland games the prince’s had to compete in to try to win Merida’s hand in marriage.

At Disney’s Hollywood Studios, guests can visit the Production Gallery of Brave artwork and models:

On the other coast at Disney California Adventure, they’ve added a new Brave section to their World of Color show:

Before Merida made her way to Magic Kingdom, she first appeared at Epcot and answered some questions for us:

For more information, including some online games,visit the official site at disney.go.com/brave

Out of the Loop: A day at Cedar Point via Tweets

The Rumor Queue: Could ‘Guardians of the...