Movie Review: Finally return to Underland in ‘Alice Through the Looking Glass’ 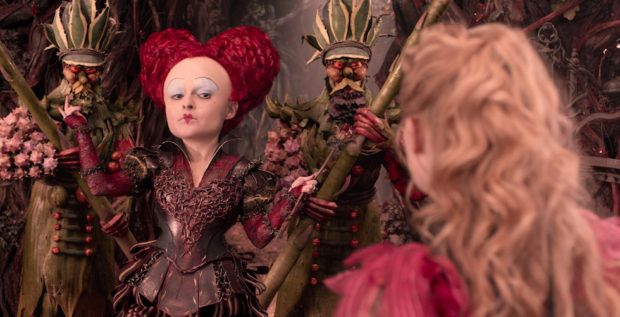 Alice (Mia Wasikowska) returns to the whimsical world of Underland and encounters Iracebeth, the Red Queen (Helena Bonham Carter) in Disney’s “Alice Through The Looking Glass”.

Back in 2010 when Tim Burton’s live-action take on “Alice in Wonderland” came out, I was 11-years-old and amazingly obsessed with the movie. So you can imagine my excitement when I heard there was a second movie coming out. Even though I don’t think it is as good as the first movie, “Alice Through the Looking Glass” is definitely a worthy sequel.

The new movie picks up a few years after we last saw Alice (Mia Wasikowska), as she is returning to London from her expedition to China. When Alice gets back, she finds her ex-almost-fiancé, Hamish Ascot (Leo Bill), has taken over his father’s business, which puts Alice and her mother (Lindsay Duncan) in a difficult situation. When Alice storms off after a fight with her mom, she sees Absolem (Alan Rickman), who has turned into a butterfly, and chases him into a study where she follows him through a mirror back to Underland. 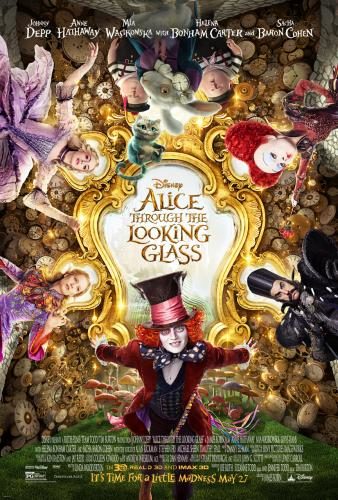 Upon landing in the White Queen’s (Anne Hathaway) garden, all of Alice’s friends from the first movie inform her that the Hatter (Johnny Depp) is sick and she might be able to help him. The Hatter tells Alice he believes his family is still alive and that she can help him find them. The White Queen then leads Alice to Time’s (Sacha Baron Cohen) castle where she must take the Chronosphere, which has the power to travel through time, to try to save the Hightop family from the Jabberwocky. This may make the Hatter’s delusions true, and bring him out of his sick state. There’s only a few problems, the largest of which being that Time’s castle just happens to be located in the same realm the Red Queen (Helena Bonham Carter) is banished to, and she wants the Chronosphere for herself.

Alice’s adventure takes her all throughout Underland’s history and back to the real world once or twice to deal with her own issues. In addition to giving a satisfying update on how the characters are doing since the end of the first movie, the sequel really fleshes out the characters of the Hatter and both queens by giving much more of their backstory. It even fills in a few plot holes in-between.

The new movie was directed by James Bobin. He keeps Burton’s style, but it definitely isn’t as dark as the first movie. Through the Looking Glass seems to have a lighter color palate and much more comedy, but that doesn’t mean the stakes aren’t as high. Overall I’d say the sequel was definitely a good mix of action and comedy. The movie did what a sequel is supposed to do by bringing everyone back to the world they love to find out how everyone is doing, and deliver a good message.

“Alice Through the Looking Glass” is rated PG and runs almost two hours long. I saw the film in 3D, but honestly I don’t think there was any special reason to, other than maybe the beautiful landscapes. There wasn’t any extra scenes at the end of the credits, but there were some things to look at during the beginning of the credits. A sound clip of one of the characters saying something played after the credits ended, but it wasn’t anything too exciting to sit around for.

In the parks
When most people think of Alice In Wonderland they probably think of the classic Mad Tea Party ride, which, as always, is at Magic Kingdom in Orlando and the Disneyland parks in California, Paris, Hong Kong and Tokyo. Even though the Alice in Wonderland ride at Disneyland in California and Alice’s Curious Labyrinth in Paris aren’t based off the live action films, they’re still a fun way to experience the world of Wonderland. If you want to experience the live action films, you can visit the Alice In Wonderland Maze in Shanghai Disneyland, where guests can choose their own path through Underland on the way to Mad Hatter’s tea party. You’ll also find some merchandise based on the new movie at Disney Stores and Parks.

Here’s a look at the trailer, a Johnny Depp surprise at Disneyland and some other theme park Wonderland fun: