Movie Review: Funny, cute and engaging, ‘Despicable Me 2’ is a must see 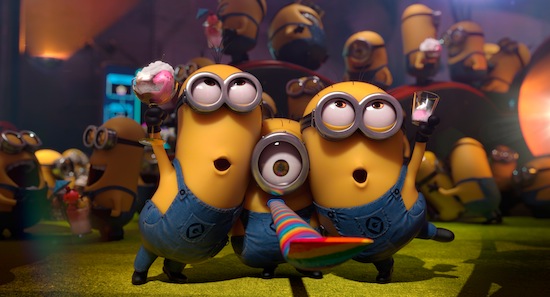 Even if you haven’t had a chance to see the first “Despicable Me” movie, you’ll love “Despicable Me 2”. The movie makers took the characters fans loved the most in the first movie and gave them even more screen time.

Now that Gru, the world’s greatest villain, is a dad, he’s hung up his evil ways. He’s decided to use his evil lair for something a bit more delicious – a jelly factory. Only Gru’s jelly isn’t delicious, it’s downright awful. Even his minions can’t stand it. And his assistant, Doctor Nefario, isn’t happy making jelly instead of evil gadgets. 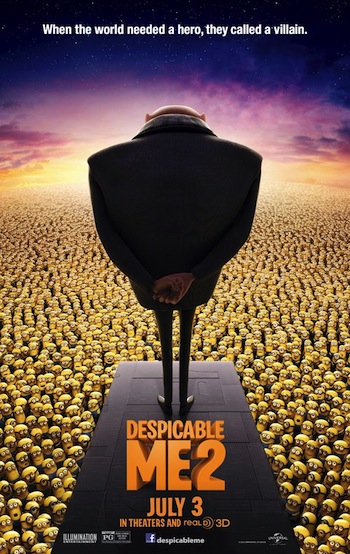 So what’s an evil genius to do if he’s not being bad and can’t make jelly? Join the good guys of course. But Gru needs some convincing to join the AVL (Anti Villains League). This brings in a new character, Lucy. She’s sort of an intern with the AVL who becomes Gru’s crime fighting partner. Gru and Lucy are sent undercover in a mall to find out which store owner is hiding the potion that turns living things invincible and angry. (This is where the Evil Minions come in. But even Evil Minions are cute and funny.) Will Gru and Sally, with the help of Gru’s kids and Minions, figure out which of the merchants is actually an evil genius?

As mentioned earlier, the fan favorite Minions get more screen time this time around, as does the youngest and cutest of Gru’s daughters, Agnes. You’ll see some really funny scenes with both, including some jokes only the adults will get (but not adult jokes). Without giving too much away, I’ll mention there is more than one love story and some surprises.

There are couple of more gadgets and some returning favorites, but I would have liked to have seen even more. I was also disappointed that Vector, the main villain from the first movie, doesn’t make a return. As this movie introduces a new bad guy. Maybe the movie makers are building up a stable of bad guys for a future team-up movie.

Although the characters are drawn in a style that is obviously not realistic, there are some scenes and objects that are photo realistic. This is one of few movies I recommend you see in 3D. The 3D really pops in some scenes. It’s not just used for depth. There’s no extra scene at the end of the credits, but you’ll definitely want to stay for the Minion scenes during the first half of the credits, especially if you’re seeing it in 3D.

Despicable Me 2 is rated PG, but unless some Minion fighting and other animated violence bothers you, I consider this movie great for the entire family.

If you’re in Orlando, a great complement to the movie is the Despicable Me: Minion Mayhem attraction at Universal Studios Florida. Here you’ll get to enter Gru’s house and lair and even become a Minion yourself. You’ll also find a lot of great merchandise in the Super Silly Fun Stuff gift shop. The attraction storyline doesn’t cross over into the new movie, so you can enjoy it either before or after the movie.

Starting Oct. 1, you can extend your Despicable vacation by staying in a Despicable Me Minion kids suite at Loews Portofino Bay Hotel at Universal Orlando Resort.

Here’s a look at the “Despicable Me 2” movie premier at Universal Studios Hollywood CityWalk:

The Despicablimp flew over Universal Orlando in promotion of the movie:

Despicablimp flying over Universal Orlando in promotion of Despicable Me 2

The grand opening of the attraction:

Here’s a preview of what guests see while on the ride:

For a more in-depth look at the attraction, fast forward to the 35:34 mark in the July 2012 episode of “Orlando Attractions Magazine – The Show”:

Here’s a look at the attraction queue, the post ride dance party and the gift shop:

The Universal Superstar Parade incudes a Despicable Me float (Which was featured on the Summer 2012 cover of Orlando Attractions Magazine):

Stars of the movie also provided voices for the attraction:

Some of the characters in a dance-off at Universal Studios Florida:

The. Movie is the best sequel to a animated movie sice shrek 2. Universal creative would be morons if hey don’t incorporate or put characters for this movie (spoiler alert) bad purple Minos to the park, if they don’t do anything they will be needing some minon help.

I have to agree with Josh, Despicable Me 2 is one of the best sequels since Shrek 2. I just pray that Universal decides to make a third Despicable Me after the Minions spin-off next year. They’ve really got a good franchise on their hands now. 😀

What does Disney do with all the...