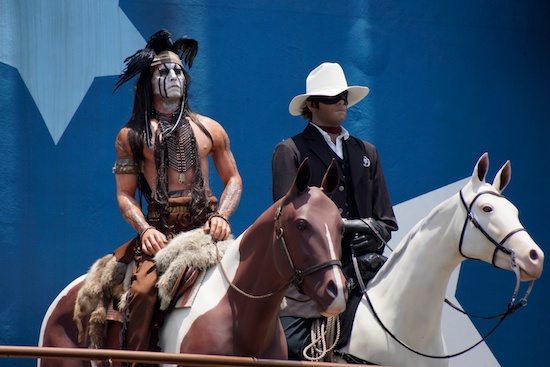 Disney’s “The Lone Ranger” staring Armie Hammer as the Lone Ranger and Johhny Depp as Tonto, is funny, action-packed and thrilling, but not a movie for the whole family.

“Who was that masked man?” You’ve probably heard that asked in your lifetime and you’ve probably heard “Heigh Ho Silver”, and of Tonto and silver bullets, but you may not realize they’re all from “The Lone Ranger” radio show. Yes the story of the Lone Ranger was started in 1933. It also ran as a television show in the ’50s. But whether you remember it from the ’30s, ’50s, from reruns later or not at all, chances are you know some of the phrases but not the full story. 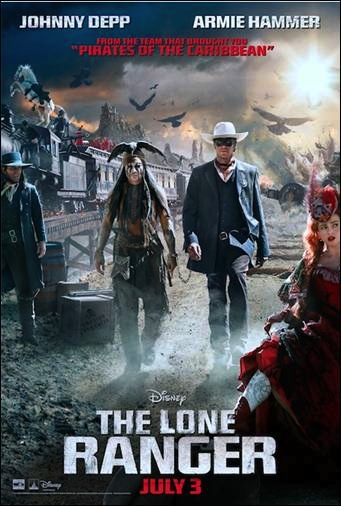 Before you go see the movie, and you should go see it, you have two choices. You can go in not knowing much about the characters or how they became the heroes of the west, or if you’re like me and appreciate it when filmmakers stick to original stories and don’t try to change it just for the sake of change, you may want to brush up on the history of The Lone Ranger by reading the Wikipedia description first.

The movie isn’t about the Lone Ranger and his sidekick Tonto fighting the injustices of the Wild West. This is an origin tale about how a lone man came to be the masked man and how he became friends with an Indian. It takes a long time (the movie is two and a half hours long) for the Lone Ranger and Tonto to become the men you expect them to be. That’s not a bad thing. Just don’t go in with a certain expectation of how the characters should act. Save that for the sequel.

That is, if there is a sequel. This movie deserves one but I worry about it running into the same problem as the “John Carter” movie did. My whole family really enjoyed “John Carter”, but it was a box office flop. Whether it was because of bad marketing or just a bad movie title, I worry about “The Lone Ranger” having the same fate. Will the Lone Ranger name or even Johnny Depp’s get people excited about seeing a western based on a character from the early 1900s? I hope so.

Before you rush out to buy tickets for the whole family, beware. Take the PG-13 rating very seriously. The movie features a lot of deaths and a couple of really gruesome scenes. The main bad guy is on par with Hannible Lechter. He even grosses out his posse.

There are some parts which are a bit confusing, some that are a bit unbelievable (I’m talking to you Silver), and the run time could have been shortened. But overall it’s a great movie which will hold your interest throughout.

PS. There are no extra scenes at the end of the credits.

As expected, you can find “The Lone Ranger” merchandise in the Disney stores and theme parks. While supplies last, you can also purchase a Lone Ranger boot-shaped mug filled with root beer slush at Pecos Bill’s in the Magic Kingdom. Over at Disney’s Hollywood Studios you can see an extended trailer in the ABC Sound Studio until Aug. 3.

Here’s a look at the red carpet premier at Disney California Adventure:

Movie Review: Funny, cute and engaging, ‘Despicable Me 2’ is a must see