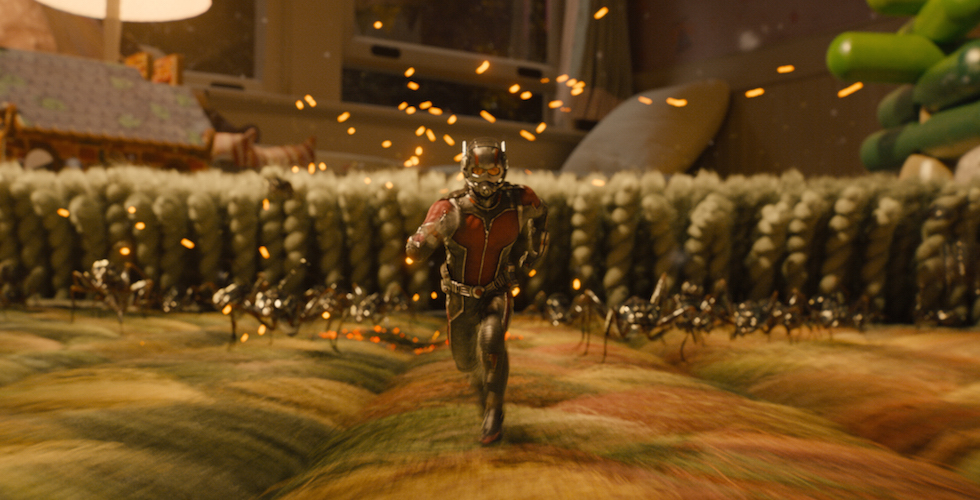 If you’re like my family, you may not be too excited about seeing Marvel’s “Ant-Man”. You may have never even heard of Ant-Man. You may be thinking Ant-Man sounds like a silly name for a superhero and Paul Rudd a silly choice to play him. But put all that aside and go see it, because you’re going to have a great time. 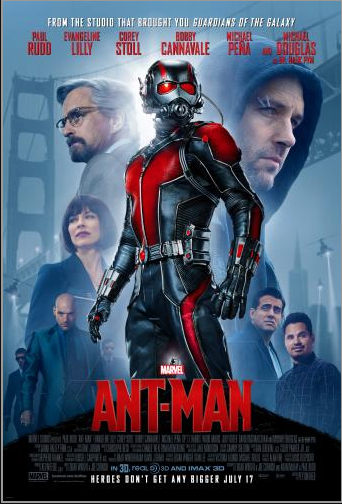 I didn’t know a lot about Ant-Man before seeing this movie but I knew he was an established Marvel comic book character named Hank Pym. I’d also heard that Paul Rudd was playing Ant-Man, but his character’s name wasn’t Hank. So I was worried Marvel was trying to change comic book history. But that isn’t the case. Hank Pym is in the movie but the story is about Hank training a new Ant-Man.

Hank (Michael Douglas) used his shrinking suit years ago in a war, but he has since hidden the technology away, worried it could be devastating to mankind if it ever fell into the wrong hands. But one of Hank’s protégés, Darren Cross (Corey Stoll) figured out Hank was hiding something from him, so he developed his own shrinking technology called Yellowjacket. And he’s planning on selling it to the highest bidder. No matter who that happens to be.

So Hank, with some reluctant help from his daughter Hope van Dyne (Evangeline Lilly), finds someone young, fit and smart enough to wear his Ant-Man suit and try to destroy Yellowjacket. This is where Scott Lang (Paul Rudd) comes in.

I was worried about the actors in this film. Would a serious actor like Michael Douglass fit into a superhero film? Would a comedic everyman actor like Paul Rudd be believable as a hero? Would I just see Evangeline Lilly as the girl from “Lost”? My worries were unfounded. All did an excellent job. The fact that Rudd doesn’t look or act like your typical superhero is just how the character was written to be. (Also kudos to director Peyton Reed for the flashback scenes with actors mouthing the storyteller’s voice. You’ll see what I mean. It’s cool.)

Although this is a stand-alone Marvel movie and you can enjoy it without having seen any other Marvel movie or television show, there are plenty of mentions and cameos for Marvel fans. Even though Ant-Man is a fun superhero and can kick butt, I don’t see him fighting alongside the Avengers. I hope Marvel keeps Ant-Man mostly in his own separate storyline and movies.

Even if you’re not very excited about seeing Ant-Man, see it anyway. You won’t regret it.

• “Ant-Man” is rated PG-13 for the standard superhero violence and a few cuss words. It runs just less than two hours and is available in 3D. I recommend you spend the extra bucks and see this one in 3D for the miniature scenes. The 3D adds extra depth when Ant-Man is running through a carpet jungle and other “huge” everyday items. Be sure to stay until the end credits are over. There’s both a middle and end credit scene.

In The Parks
So far, Ant-Man hasn’t made much of an appearance in the theme parks. You’ll find some T-shirts, toys and costumes in some of the stores, especially the Marvel Superhero Store at Downtown Disney. For a limited time, the appropriately picked Bug’s Life Theater in Disney California Adventure park is showing a sneak peek of the movie in 3D with in-theater effects. The Ant-Man suit is also on display there. Otherwise, keep your eyes out for one of the five Ant-Man wrapped busses at Walt Disney World.

Ant-Man was a founding member of the Avengers, and the Scott Lang version has also belonged to the team in the last 10 years or so. The character from this film has already been confirmed to be in next year’s “Captain America: Civil War” film, which is practically an Avengers film as it will also feature Iron Man, Black Widow, Bucky Barnes/The Winter Soldier, Falcon, Vision, Hawkeye, War Machine, Scarlet Witch, and will introduce the Black Panther character AND the new MCU version of Spider-Man — essentially, any hero from the previous Avengers films except Thor and Hulk (and maybe Nick Fury), plus new ones. So I’d say it is a fairly safe bet that Ant-Man will appear in the next Avengers film.