Movie Review: ‘The Huntsman: Winter’s War’ – Quite nice as far as winters go 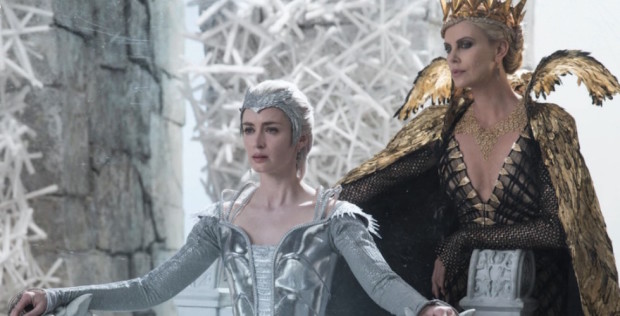 Once upon a time, the cinematic fairy tale components were pretty simple: a damsel in distress, villain, hero and usually some animal friends for good measure. These days the dark fantasy adventure genre includes complex characters, shifting alliances and open-ended storylines. “The Huntsman: Winter’s War” delivers an on all counts. 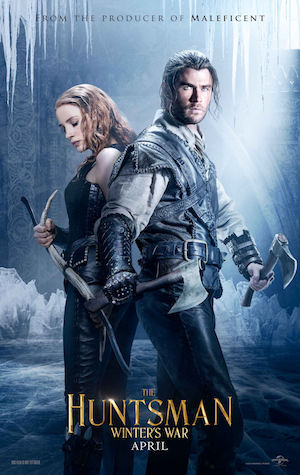 The basic question: is this a prequel or sequel to “Snow White and The Huntsman”?
Both, but mostly a sequel to the 2012 film – the movie opens with a grimly narrated flashback in which the up-and-coming wicked queen Ravenna (Charlize Theron) sets in motion a tragic event for her kind and loving sister Freya (Emily Blunt). Freya is transformed into a powerful ice queen. (This character lands somewhere between the icy royalty of Frozen and Narnia.) Freya begins destroying villages and raising an army of orphan warriors called the Huntsmen. Young Eric (Conrad Khan, then Chris Hemsworth) and Sara (Niamh Walter, then Jessica Chastain), are among her recruits. They struggle with Celtic-ish accents, fall in love, marry in secret and fail in their disastrous attempt at escape.

It’s a very jarring transition, but the story then flashes forward seven years to Eric in a forest. As for a Snow White appearance – the character is included in the plot, but dialogue takes care of any need for Kirsten Stewart, heroine of “Snow White and the Huntsman”, to actually appear in this film. Eric is enlisted to locate the Ravenna’s magic mirror on behalf of the Snow White’s monarchy. Once the Huntsman realizes Freya wants to gets her icy hands on it, he quickly finds himself on a mission with an unexpected ally and dwarf quartet (featuring Rob Brydon, Nick Frost, Sheridan Smith, and Alexandra Roach). The group sets off into vibrant  fantasyscape, only to realize Freya’s master plan. But not even the Ice Queen can predict the mirror’s secret.

The dwarves provide much-needed comedy and some of the most memorable lines of the film, but it’s the leading lady trio that offers the best variety of performances. Theron resumes Ravenna’s perfect juxtaposition of beauty and evil. Blunt’s Freya transformation and cold demeanor add a great dynamic to the Queens’ feud. Chastain’s character, despite some strong resemblances to the archery-inclined heroine of another franchise, pairs well with Hemsworth’s comedic timing.

Though it sticks to familiar territory, Winter’s War is a visually rich fairy tale film. There’s a meticulous level of detail in scenery, props and especially Colleen Atwood’s costumes. (Atwood is also a long-time collaborator with Tim Burton.) The film’s director, Cedric Nicolas-Troyan, served as visual effects supervisor on Snow White. He’s avoided the obvious pacing issues of the first film; Winter’s War clocks in just over two hours and moves deliberately. The prologue feels long within the film’s format, but it’s refreshing to move away from the well-known plot elements of Snow White, especially in later parts of the film. This journey doesn’t have the defined checkpoints of dwarves and poisoned apples. At times, Winter’s War struggles to find clear direction and emotional stakes, but delivers visually rich bookends to the first film.

As someone who actively avoids cold weather, I will say I enjoyed this
Winter.

I strongly recommend watching “Snow White and The Huntsman” prior to attending Winter’s War. Without it the time jump and some plot elements are going to be confusing. Then again, fans of the first film will spot some continuity issues in the new installation. It’s visually rich with beautiful CGI, but none of the sequences struck me as something I had to see in 3D. The film is rated PG-13, with some sensual scenes (but no nudity), intense battle sequences and language.

In The Parks
This version of the Snow White characters don’t have any direct connections to the theme parks, but if you’re interested Disney’s version, you’ll want to meet Snow White in multiple Disney parks and ride Seven Dwarfs Mine Train ride at Magic Kingdom and Snow White’s Scary Adventures at Disneyland. The Ice Queen in the movie is no Elsa, but you can sing along with Elsa and her sister at Disney’s Hollywood Studios, meet her at Disneyland and Magic Kingdom and soon see the Frozen story at Disney California Adventure and ride their ride at Epcot.

Fast & Furious Experience this weekend at...