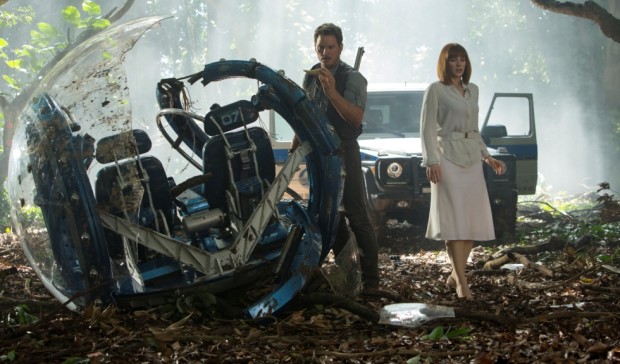 Twenty-two years have passed since “Jurassic Park” was released in theaters. Even though there have been two other films, this fourth installment in the franchise made me feel like a kid again, watching that first film for the first time. 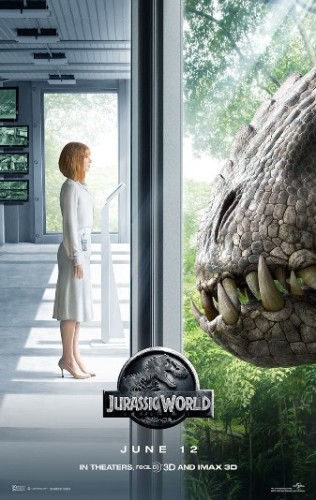 The tagline for “Jurassic World” is “The Park is Open,” and the movie wastes no time in getting you inside. Two kids (Nick Robinson and Ty Simpkins) are visiting the park to get a tour by their aunt Claire (Bryce Dallas Howard), who also helps run the park. During their journey to the park, Michael Giacchino’s score recalls the original Jurassic Park theme by John Williams that builds to a beautiful moment that immediately took me back to my childhood and gave me chills. I was so excited to finally see a fully functioning, open park!

Of course that doesn’t last long as we are quickly introduced to the big baddie dinosaur of the film, the Indominus Rex. This hybrid dino was genetically made for the guests who said they wanted something bigger, louder and with more teeth. And since this is a Jurassic Park film, it doesn’t take long for this big girl to break loose and start creating havoc.

Indominus Rex isn’t the only focus point of the film. One of the sub-plots revolves around a raptor squad led by Owen (Chris Pratt). He has created a relationship with the raptors since their birth and considers himself the alpha of the squad. Of course, Hoskins (Vincent D’Onofrio), the head of Jurassic World’s private security force, feels they aren’t using the raptors to their full potential. This kick-starts a sub-plot that may set up what we could see if they make another “Jurassic World” movie.

When you think of a “Jurassic Park” film, you expect to see lots of dinosaurs and lots of destruction, and this movies does not disappoint. With the first film, there were just a handful of people trying to survive a few dinosaurs, “Jurassic World” features a working theme park with more than 20,000 people in attendance, so the carnage is on a massive scale, especially once the pteranodons and dimorphodons escape. I need to go back and count, but I believe this movie has more deaths in it than the first three movies combined.

There are a lot of references and nods to the original “Jurassic Park” – from music cues in the score, to dialogue about John Hammond and the first park, to even a visit to a now overgrown location from the first film. The filmmakers knew nostalgia would be a big reason people go to see “Jurassic World,” and they gave us plenty of it throughout the film, with the final shot making me tear up and want to watch the movie again.

The action is crazy and kept me on the edge of my seat. The suspense is unnerving and several moments made me jump. The pace is definitely quick. If I felt it was getting a little too slow at points, the movie would almost immediately make me forget that. There were a couple of sub-plot points I felt didn’t really needed to be there, but they absolutely did not deter my enjoyment of this film. The park is definitely open, and I know this “Jurassic Park” fan was instantly transported back to 1993 again.

The movie is rated PG-13 for “intense sequences of science-fiction violence and peril.” It’s just over two hours long. I saw it in 3D, and while there are a few nice 3D moments, I don’t feel it’s a necessity. There’s no end credit scene, but portions of the movie do leave it open for a possible “Jurassic World 2.”

In the Parks
After seeing “Jurassic World,” I feel a lot of people will be like me and want to visit the park in the film immediately. While you can’t do that, the next best thing is the Jurassic Park area at Universal’s Islands of Adventure in Orlando.

Universal Orlando is also selling lots of “Jurassic World” merchandise around the park, mainly in Jurassic Park and the main stores at the front of each park.

Don’t forget about the new Raptor Encounter at Islands of Adventure. You can get up-close and personal with a live “raptor” after seeing them kick butt in “Jurassic World.” Here’s a look at the encounter in action: