Movie Review: ‘Marvel’s The Avengers’ smash their way into a summer hit 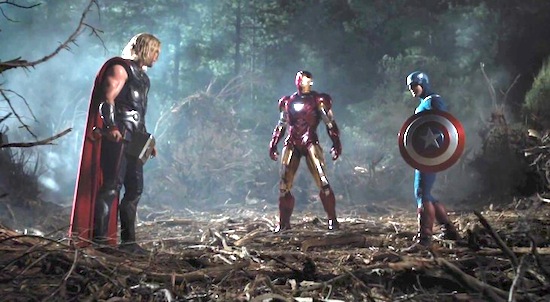 Before I get into the finer points of Marvel’s The Avengers, allow me to make a very important statement on the symbolism and deeper meaning of this film. HULK SMASH! (Some very minor spoilers ensue, but nothing about the ending.)

Here’s the simplest truth about Marvel’s The Avengers. It delivers. In every way that you hope it will. Ensemble chemistry? Check. Relentless action scenes? Check. Lighter comedic moments that diffuse tension and lampoon any danger of entering “too silly to be believable” territory? Double check. This movie is exactly what you hope it will be and then some. Don’t hesitate to see it. If you came to this review to help you make up your mind about whether or not to plop down your $20 for yourself and a date, there you have it.

And now, for the extra geeky digging in part of the review. If you’re still here, settle in. It’s about to get ultra-dorky up in here …

Joss Whedon has long been known as the master of ensemble cast play. I’m a huge

Buffy the Vampire Slayer fan. So I’ve known since high school that the man knows how to write for and direct multiple characters without dropping a single arc along the way. His genius comes in the fact that he addresses what the audience is dying for him to address. I mean really, Avengers is a big “what if” scenario. What if Iron Man and Thor met? How would they get along? We’ll find out. What if the Black Widow had to fight a foe triple her size completely on her own? What if you had to put the Hulk around delicate machinery? A lot of movies miss these opportunities. But Whedon has an innate understanding of what an audience really wants because he himself is a fan of the material, so he can trust his instincts and thank goodness he does. (And please, do yourself a favor and check out Whedon’s writing for The Astonishing X-Men. You’ll see the same chemistry and attention to detail in that comic that he takes with him everywhere he goes.)

They got the Black Widow right. I’m something of a feminist when it comes to my comics. I buy a lot of the female-lead series like Birds of Prey, Sirens of Gotham and all the single character books I can get my hands on. (Catwoman, Batgirl, Black Widow, Harley Quinn, some of which are not running at the moment.) And usually in movies like this, the action heroine gets second billing, especially if she doesn’t have a super power. But remember … Whedon hails from Buffy territory,

so he knows how to portray a strong female character. Without flinching or apologizing for it. And finally, we get a really good idea of what the Black Widow does well. Espionage and manipulation. If you paid attention during Iron Man 2 you sort of got the idea that this is a woman with limitless mental resources, but she was more of a babysitter in that movie and we got the feeling that her character was always holding back. This time, she gets to let loose a little bit. Between that and her unique fighting style of essentially having to climb on top of enemies or confuse them in order to win, it’s just fun to see her getting the placement she deserves. Front and center with the rest of the boys. I don’t know about you, but I’m ready for a Black Widow movie. Studios are still iffy on whether or not audiences want a female-lead action film. Please, tell them that you are. I am. I would see it. Multiple times. So Marvel, please make a Black Widow movie.

There’s SO. MUCH. SMASHING. I sometimes flinch at the almost universal need for action films to destroy cities. Yes, I know, it’s fictional. It’s not real. But there’s still a part of me that doesn’t want to see buildings fall, if you understand what I’m getting at. But Whedon makes it fun again. Mostly because of The Hulk. Again, not a single missed opportunity to play with Hulk’s special ability. Sheer and utter destruction. It’s nice to see the bad guys get some of what their dishing out.

Samuel L. Jackson does what he does best. Delivers some excellent dialogue. Whedon gives him scene after scene to chew through. Get ready for some awesome one-liners.

Disclaimer: I saw this at a media preview. Which means we all got in for free. But let me just say, I have never been in a screening for a film that included more cheering, more applause, more wild laughter and more of a community feel than this one. The reporter next to me was dressed very well in slacks and a tie, he had his notebook out and before the movie started we were doing that “this is an invisible wall” thing you do with strangers at movie theaters. But by halfway through the movie we were literally looking at each other and going, “Can you believe that?” This is a film that is so satisfying that it kind of bonds an audience. At one point, it was like that scene in Ghostbusters 2 where New York gets sprayed with pink goo and the Ghostbusters are walking through the city in the statue of liberty to “Higher and Higher”. We were all just so happy. We were actually – wait for it – having fun at the movies! There wasn’t any room for snark or cynicism and today’s audiences are tough. So for a movie to accomplish that en masse is quite the feat. And I admit, I’m usually miserable in the theater. I’m the girl who shushes everyone. I HATE it when people talk, answer their cell phones or disturb the theater experience. My guess is that after the obligatory 10 minutes or so of everyone getting settled in, you too will have an uninterrupted movie-going experience.

The cast really gels and it’s fun to watch them play together. If you’ve ever read any of the comics, you’ll enjoy seeing Captain America settle into his role of leadership. You’ll enjoy Iron Man doing what he always does. Iron Man is really the audience’s touchstone. We are seeing all of this through his eyes. He addressed our doubts. He makes us laugh. Without his sarcasm, the movie might be so hard to believe that we couldn’t relax and settle in. But when he does things like calling the villain, “Reindeer Games” it keeps us invested in the movie and grounded in the believability. It prevents us from crossing our arms and going, 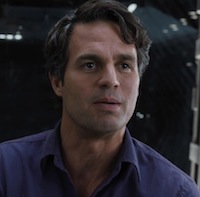 “Psht, that would never happen.” (And Robert Downey Jr. steals every scene his in, there’s no denying that.) Mark Ruffalo is the best Hulk to date in my opinion. He portrays the character the way it really should be, scary. The Hulk should be intimidating, nerve-wrecking and downright terrifying. Ruffalo gets that idea and he plays him as a dangerous man always on the verge. There was a moment in the film where Ruffalo isn’t even hulked out and I almost jumped out of my seat because he frightened me so much. So finally, enjoy a Hulk with the edge he was always intended to have. You already know I love Black Widow and Thor is still the fish out of water we love to root for. He’s the Spock of this ensemble. Always a little bit behind on modern references, a bit arrogant because of his physical superiority. He’s the jock pretty boy of the bunch, even more so than Cap. The cast never lets a moment drop. If they aren’t speaking, they’re exchanging meaningful looks. In fact, I’m excited to see it again just to go back and watch the character reactions when they’e in the background.

I have one single complaint. The trailer ruined a climactic moment of awesomeness. That happens ALL the time nowadays. But the biggest cheer in the film was a moment we all knew was coming, so there was no tension whatsoever and that’s when we should’ve been on the edge of our seats. I understand why they put it in, if I had been cutting the trailer, I probably would’ve done it too. But still (say it like Jon Lovitz) I hate when that happens.

Bottom line? See it. Then see it again. My only worry is that the summer movie season is peaking too early. This was the movie I was waiting for all winter. So I guess I’ll just have to see it multiple times. When it comes to first-world problems, that’s not a bad one to have, is it? Remember when superhero movies were The Phantom and The Shadow. (I happen to love the cheese-fest of The Shadow and if you pay close attention, you’ll notice, it’s oddly similar to Batman Begins.) If only I could’ve told my little kid self that someday, I’d get to see the perfect superhero movie. Because that’s what this is. The perfect superhero movie. Even the geekiest geek will probably be able to relax and enjoy without having to nit-pick. And I know that for a fact because I am one.

So that’s it, what are you waiting for? Go buy your ticket? P.S. If you read the comics, get ready for a surprise during the credits so awesome, you’re going to SCREAM!

A look at The Avengers monorail at Walt Disney World:

An interview with some of the stars of the film at last year’s D23 Expo:

Great review! I loved this movie and I think I know the exact climatic moment that you describe was ruined in the trailer. I knew it was coming, but I think knowing that it was coming only slightly dampened my excitement. It’s actually so slight that I’m sure many people don’t notice or don’t dwell enough to care. On the other hand, maybe I was just so pumped about this film from watching the cartoons on Dishonline that I didn’t care. I use Dishonline to learn about movies, characters and directors, and in this case, I learned more about the Avengers team. One of my co-workers has been suggesting that I pick up a few of the graphic novels, since the stories are pretty in depth along with the characters. I hope the Hulk is a lot more like Ruffalo’s rendition of the Hulk, because I agree with you that he really did well at playing a man always on the verge.

Great review, Audrey! 🙂 As a fellow geek-in-arms, I agreed with basically all your points. Joss Whedon is a perfect match for this franchise, not only because he knows what fans want to see, but he presents it in a way that doesn’t feel like fanboy/girl pandering (a massive pet peeve of mine). I could go on forever about this movie, but I think you’ve done a great job here, and it doesn’t need any additional geek-rambling from me. 🙂