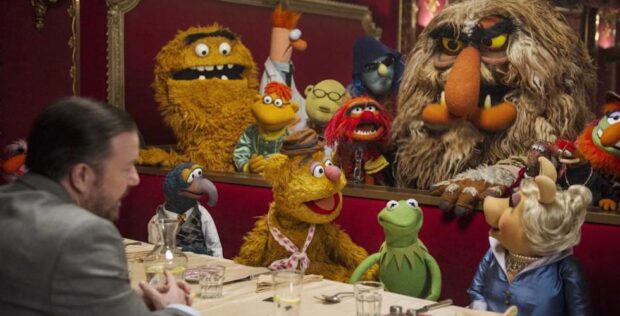 Everything you love about The Muppets is back in Disney’s “Muppets Most Wanted”. It has LOL moments, an engaging story, catchy songs, guests celebrities and all your favorite Muppets. If you like The Muppets, you’ll enjoy this movie. 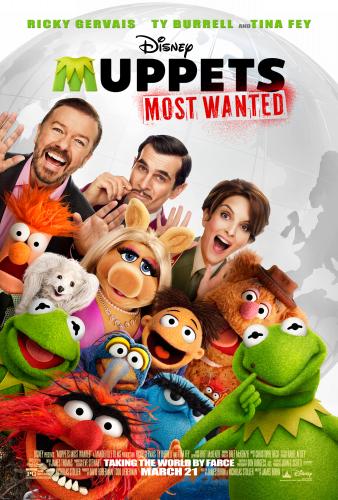 Surprisingly, this movie starts immediately after the last (“The Muppets”), although the two human stars of that movie aren’t in this one. (But Walter does return.) In fact, Kermit and the gang let it be known that “The Muppets” was just a movie a few times during this one. It was surprising but funny.

Since their last movie is over, the Muppets gang have to decide what to do next, so they set up a meeting with a guy named Dominic Badguy (Ricky Gervais). But of course as trusting as the Muppets are, they believe Dominic when he tells them his last name is pronounced “Badgee”. Of course, we realize he’s one of two bad guys in the movie.

The other villain is a new Muppet character named Constantine. He’s a mastermind criminal who looks just like Kermit except for a mole on his face, a slightly different neck ruffle and an underbite. He and Dominic realize this and arrange for a Constantine to replace Kermit in the Muppets world tour, which just happens to be booked next door to major museums with priceless artifacts and clues to obtaining the crown jewels.

While the Muppets are unknowingly helping Dominic and Constantine in their crime spree, Kermit ends up in a Russian prison with a bunch of rough-looking, but uncharacteristic prisoners. They’re under the guard of a warden (Tina Fey) who loves a good musical.

A third storyline follows Muppet Sam Eagle (who isn’t a part of the Muppets gang in this movie) as a U.S. detective and Interpol agent Jean Pierre Napoleon (Ty Burrell), who reluctantly team up to try to solve the museum burglaries.

A big part of the Muppet movies are the songs. This one has a couple of great ones and some that fit the movie well, but aren’t the kind you’ll be humming after the movie ends. Another expected part of any good Muppet movie are celebrity cameos. This one has quite a few but only a couple were really funny. And I could tell that a couple of them were celebrity cameos, but I didn’t recognize the celebrities.

My family and I all loved “Muppets Most Wanted”. We thought it was as good as, if not better than “The Muppets”. Muppet fans won’t want to miss this one.

Make sure you make it to the theater on time so you don’t miss the Monsters University Pixar short before the main feature. “Party Central” tells the story of the not-so-popular OK fraternity using the Monster closet portal doors in an unusual way. It’s LOL funny. Don’t miss it.

“Muppets Most Wanted” is rated PG and is only available in 2D. The movie ends with a bang – in the form of some cool Muppet-shaped fireworks. (Come on Imagineers, figure out how to make these in real life.) Stay through the credits for some bonus funny during and at the end.

If you’re looking for The Muppets at Walt Disney World, you’ll want to head to Disney’s Hollywood Studios where you can see the classic Muppet-Vision 3D, along with a Muppets gift shop. You can also find a new Kermit and Miss Piggy topiary at Epcot during the International Flower & Garden Festival. Although we haven’t yet seen any “Most Wanted” merchandise at Walt Disney World yet, we did spot some, including a Constantine plush doll, at the mall Disney Store.