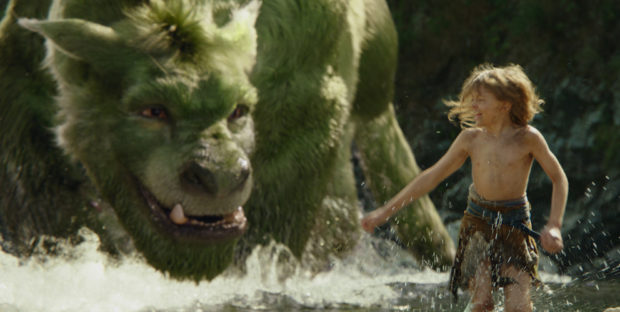 Oakes Fegley is Pete in Disney’s “Pete’s Dragon”, the story of a boy named Pete and his best friend Elliot, who just happens to be a dragon.

I first saw the original “Pete’s Dragon” movie a few years ago, and again a few weeks ago. This new rendition of the movie has absolutely no similarities other than there being a little boy named Pete and his big green dragon named Elliot (originally spelled Elliott). The new movie is not a musical and doesn’t follow the same plot at all. That being said, the new story is very sweet, and almost exactly what I expected, with the absence of Passamaquoddy, Nora and her lighthouse, and all other references and plot lines from the original film.

This version of Pete’s Dragon starts when a 5-year-old Pete (Oakes Fegley) is in a car wreck in the middle of the woods with his parents. Fleeing the wreckage, he finds a dragon which he names ‘Elliot’, after a dog in his children’s book. Flash forward six years later to when Pete and Elliot are living together in the middle of the woods. Forest ranger Grace (Bryce Dallas Howard) and her soon to-be step-daughter Natalie (Oona Laurence) discover Pete and bring him back to civilization. This leaves Elliot to try and find him, which is dangerous because there are people who definitely don’t have a dragon’s best interests at heart. 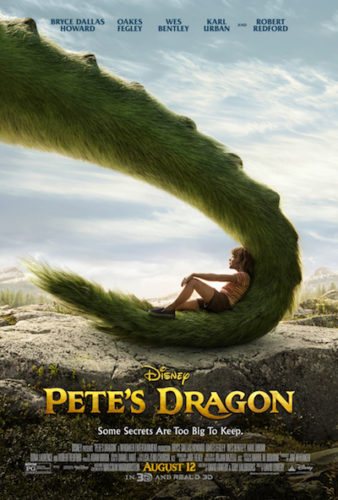 The graphics and animation of Elliot look extremely realistic and the film had beautiful views of forests and woods. I saw the movie in 3D, but it added absolutely nothing. I would go as far to say that the 3D may have even hindered the movie because it dulled down and blurred the visuals a bit in the theater we saw it in.

I personally don’t like the new Pete’s Dragon as much as the original. But if you’re looking for a cute movie to watch with your kids, family or maybe even on date night, it delivers a cute film that’ll take you on a fun adventure and leave you wanting your own fluffy dragon to cuddle with.

“Pete’s Dragon” is rated PG, and runs about an hour and 45 minutes long. There are no mid or end credit scenes.

In The Parks
Stuffed animals of Elliot and shirts with Pete and Elliot on them are sold at Disney Parks. The original Pete and Elliott can be seen every night at Magic Kingdom during the Main Street Electrical Parade.

Here’s a look at the parade:

Here’s a behind the scenes look at the Elliott float:

In case you haven’t seen or don’t remember the original movie, here’s the trailer:

Here’s a fun video from the Epic Mickey 2 video game showing Mickey Mouse and Oswald battling a version of the Elliott parade float:

The Disney Parks Blog recently held a meet-up to see the new movie with the actor who played Pete:

Out of the Loop: Disneyland Paris goes...