Movie Review: ‘R.I.P.D.’ is a fun summer action comedy for teens and adults 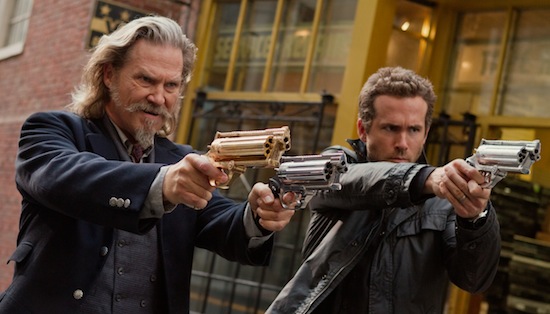 R.I.P.D. is a fun summer movie with a mix of comedy and action, with a few gross-out moments. Many are comparing the movie to Men In Black, but it stands on its own with a slightly different tone.

Ryan Reynolds stars as Nick Walker, a veteran Boston police officer who makes a bad decision which leads to his wrongful death. But instead of heading to judgement day, because of his bad guy hunting skills, he’s brought into the R.I.P.D. (Rest In Peace Department) to see if he’d like to help them round up the Deados, people who have died but refuse to leave Earth. Since Nick made a bad decision just before his death, he figures he’d better help out in exchange for a good word with the big guy. Plus he realizes this may offer another chance to see his widow. 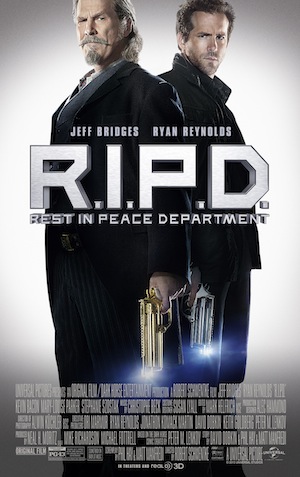 In comes Nick’s new partner, Roy Pulsipher, a cowboy who died in the 1500s, played wonderfully by Jeff Bridges. Cowboy Roy is one rough customer who is set in his ways and wants nothing to do with a “rookie” partner like Nick. But he reluctantly shows Nick the ropes, and Nick ends up showing Roy a few tricks as well. But Nick isn’t happy with his new job or his new partner. All he wants is to find a way to return to his wife, until he discovers a link between his death and the Deados, and a plot to end the world. The movie also stars Kevin Bacon as Bobby Hayes, Nick’s partner before he died and Mary-Louise Parker as Proctor, one of the heads of R.I.P.D.

The obvious comparison of R.I.P.D. is to the Men in Black (MIB) movies. They both feature a rookie cop joining a hardened veteran in fighting supernatural bad guys. And they’re both based on little-known comic book series. But that’s not a bad thing. It’s a concept that worked for MIB and it works for R.I.P.D. but I’m afraid R.I.P.D. won’t be the blockbuster hit that MIB was, just because many will skip this movie because they’re so similar in concept. That’s a shame. I’d love to see more of this duo fighting the undead. (It’s especially funny seeing how they appear disguised to the living – Cowboy Roy appears as a hot blonde woman and Nick is a old Asian man.)

The main difference in R.I.P.D. from MIB is the personal connection Nick has in the Deado world and his fight to right the wrongs with his still living family. Although MIB certainly had some gross moments, R.I.P.D. takes it a bit further when some of the Deados reveal their true selves. Some of the dialog in R.I.P.D. takes more adult tone than MIB as well. I would stick with the PG13 rating when deciding who in your family should see the movie. Our group of an 85-year-old woman, a 14-year-old boy and a 43-year-old male all enjoyed the movie. There aren’t any extra scenes to stay for after the credits. The movie has a few cool 3D scenes but you would enjoy it just as much in 2D.

Although the movie doesn’t have any ties to the theme parks yet, it is a Universal picture and it would fit well within the parks if it’s successful. You’ll find some fun games and activities on the offical website at ripd.com.

Here’s a look at the trailer:

Out of the Loop: Cedar Fair goes Coasting for Kids