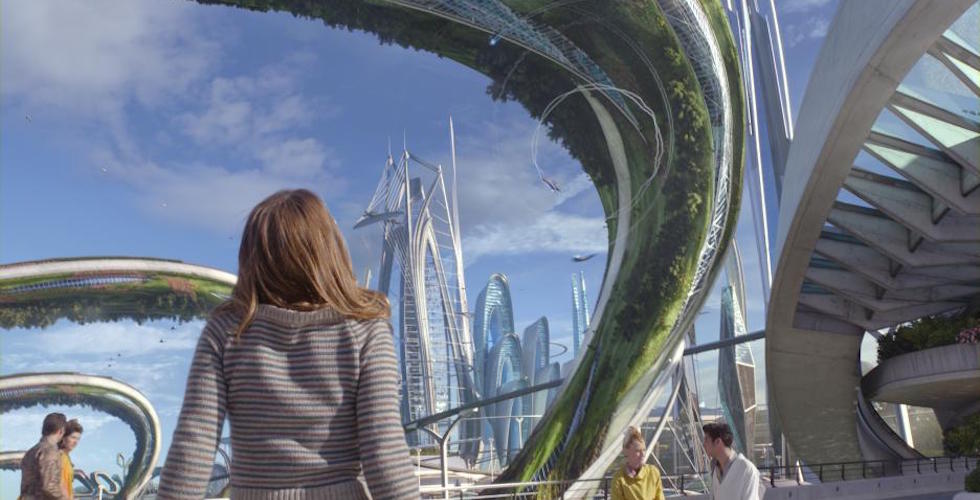 I really wanted to love Disney’s new “Tomorrowland” movie, but it didn’t meet my expectations. Although it had some great moments, it left me unsatisfied and a bit confused. 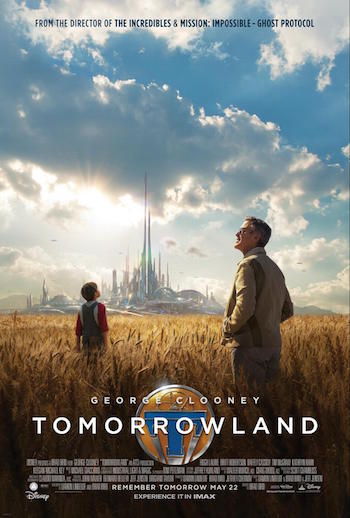 Usually when I see a movie I’m going to review, I know exactly how much of the movie I want to talk about, so as not to spoil the experience. But this one is tough. There isn’t a clear point when the movie switches to a spoilery (if that’s a word) part, until the very end. So if you want to remain completely spoiler free, skip down to our “In the Parks” section. But if you want to know what you’re in for, without major spoilers, read on.

The movie begins with Frank Walker (George Clooney) speaking directly to the audience, telling them his story while arguing with a girl offscreen. His story begins when he’s a young dreamer and inventor, visiting the 1964 World’s Fair. He meets a little girl named Athena (Raffey Cassidy), who gives him a pin and tells him to follow her. Young Frank follows her onto the “It’s a Small World” ride, which was making its debut. When a scanner on the ride recognizes his pin, Frank is automatically transported to a new dimension called Tomorrowland. It’s a wondrous futuristic city. I wish we’d been able to see more of it.

Cut to the girl Frank is arguing with in the narrative, and we begin to hear her story, which is the bulk of the movie. Casey (Britt Robertson) is a young girl who is always looking up at the stars. She loves them so much that she sneaks into NASA at Kennedy Space Center to try to stop the demolition of one of the launch bays. That doesn’t turn out too well for her, but it leads her to discover one of the magical pins that led young Frank to Tomorrowland. But hers doesn’t directly lead her there, it shows Tomorrowland to her and makes her want to go.

Even though it’s years later, Athena, still a young girl, shows up to lead Casey on an adventure to find Frank, who can help take her to Tomorrowland, which has changed a lot since Frank was there, and apparently because of Frank.

That’s all the detail I’ll go into, but I will tell you it’s never entirely clear to me why Tomorrowland changed. There are a few points in the movie I never quite figured out and a few decisions the characters made that I didn’t quite understand. But that isn’t all that made me disappointed in the movie. You’d think a movie called Tomorrowland would showcase more of this very cool city with hoverrails and people zooming by on jetpacks. I was left wanting more.

Also, as a big Disney theme park fan, I was disappointed in the lack of theme park mentions and scenes. Yes, the Small World scene is very cool, but that’s it. If you saw the movie preview at Epcot, you saw all the Disney references. Going in, I had seen some of the promotions online, which mention that Walt Disney was one of the members who helped build Tomorrowland, but his name isn’t mentioned in the movie. We had reported on the movie filming some scenes at the Carousel of Progress in Magic Kingdom, but those scenes didn’t make it in. There were even some scenes in the trailers where a couple of shopkeepers mention Disney parks, but those lines were also cut from the movie. For a movie named after a section of the most popular theme park in the world, I expected more references from the Tomorrowland most people know.

The movie has some funny and exciting scenes, and some great scenes in the cool futuristic city, but unfortunately, for me, they didn’t all tie together well enough to make a great movie.

Tomorrowland runs two hours and 10 minutes long. It is rated PG for violence. Most of the violence is just on robots, but there are a few humans killed as well. The movie is not available in 3D. There is an extra scene at the end of the credits, but it’s just a quick scene of a hand touching a pin.

Of course you can visit Tomorrowland yourself in the Magic Kingdom or in many other Disney parks around the world, but its relation to the movie is nil. One building, Space Mountain, looks like one of the buildings in the movie, but that’s it. Of course you can also get a Tomorrowland pin and ride It’s a Small World (in Fantasyland), but don’t expect to be transported anywhere except the end of the ride. (The tower that scans Frank’s pin in the movie can only be found in Disneyland’s version, not at Walt Disney World).

As I mentioned earlier, you can see a preview of Tomorrowland at Epcot in the Magic Eye Theater in Future World for a limited time. At Disneyland, the preview is actually shown in Tomorrowland, and they have some props from the movie on display too.

One item I’d still like to have is a pin just like they used in the movie. Although I haven’t seen an exact one, you may be able to find a similar one in the parks and at other retailers such as Hot Topic. For a limited time, you can get a less detailed version of the pin free by asking in the Chevy showcase at the end of Test Track.

The author completely missed the point of the film and didn’t receive its message, and probably shouldn’t review movies.

If I missed the point of the film then maybe it wasn’t presented well enough. I get that the point is to be inspired by the future and to not let negative thoughts get in the way. But I feel I was told that, not inspired by it.

Matt,
Your review was right on target. The movie was long – too long, boring after the first 20 mins – 1/2 hour, and the only exciting parts for us was the BRIEF showing of It’s a Small World and the NY World’s Fair (that we actually have a few memories of). The futuristic city was awesome too. However, George Clooney was…..well George Clooney as usual, the female actresses were annoying, the movie was confusing at times, and we really just couldn’t wait for it to end as it didn’t hold our interest and was a complete let-down. Obviously, the poor box office turnout confirms that most people feel the same way as do many critics who hated it. All in all, the movie is a bomb (costs 280 million to make including promotion) and will lose a lot of money…..and rightly so. The MESSAGE we got is that the movie was a waste of our money, especially since we saw it in Imax!