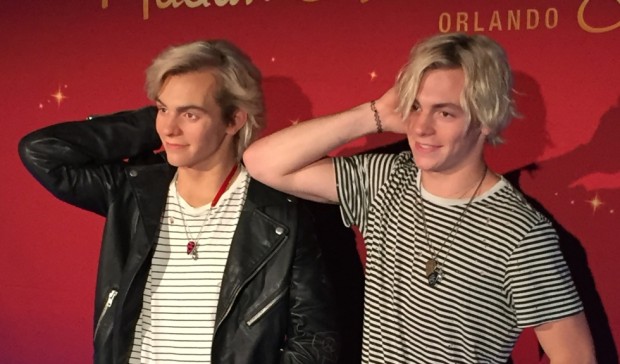 Music, film and television star Ross Lynch came face to face with his new wax figure as he helped reveal it for the first time at Madame Tussauds Orlando.

Lynch met with Madame Tussauds artists where more than 300 precise measurements of his head and body were taken to create a perfect replica of the rising star. At the sitting, Lynch and his father were discussing several ideas for his figure’s pose, when he naturally fell into a casual stance that was reflective of his personality. Lynch also provided artists with the clothing and accessories for his figure, including a leather jacket, R5 guitar pick necklace, socks and his signature pink underwear, which he said his fans would expect to see.

“This whole experience with the Madame Tussauds team was so cool,” said Lynch. “I’m excited to see how the figure will look, especially since he’s rocking my pink boxers!”

Guests at Madame Tussauds Orlando will experience the essence of America with this immersive and interactive wax experience as they move through themed areas meeting all of their favorite stars from award-winning film actors, to historical and modern world leaders, sports stars, music legends as well as figures important to Florida. All visitors can shake hands with the president, get on stage with rock stars and pop princesses, or get up close and personal with a Hollywood heartthrob and take the ultimate selfie.

Who is this “star” Ross Lynch?!