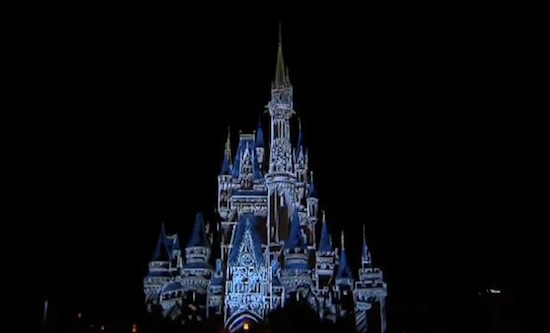 Beginning in 2011, Magic Kingdom guests will become the stars of a nightly spectacular when photos taken in the park that day become larger-than-life projections on Cinderella Castle. Disneyland in California will offer their guests’ photos projected on “it’s a small world”. Beginning this week, Disney guests will also star on television, as part of the new “Let the Memories Begin” campaign.

In both locations, the projected photos will be selected from among those taken by PhotoPass photographers. As many as 500 photos will be used in each location every day, producers estimate. 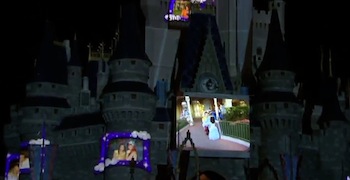 The nighttime show will use the latest in high-intensity projection technology to create vivid visuals that seem to defy the architecture of the building. A new song commissioned for the show will provide an emotional context for these images of the Disney guest experience.

“A Disney vacation is the perfect way to create family memories that will last a lifetime,” said Tom Staggs, chairman of Walt Disney Parks and Resorts, at a media announcement Thursday in New York. “We’ll spotlight those ‘only-at-Disney’ moments with family and friends during our ‘Let the Memories Begin’ campaign.”

Beyond seeing their own projected photos in lights, guests also could become the stars of Disney Parks television commercials, online campaigns and social media opportunities. The campaign kicks off this week with a TV commercial created from videos posted online in social media forums.

For future TV commercials and other advertising and marketing programs, Disney Parks is asking guests to share their memories by uploading photos and videos at a special “Let the Memories Begin” online hub at DisneyParks.com/Memories. From a first meeting with a princess to a laugh-filled watery touchdown on Splash Mountain, Disney Parks is looking for videos and photos that capture those never-to-be-forgotten experiences. Guests can categorize their memories by theme, emotion and location. Memories can be uploaded as photos, videos or text-only.

Some memories will be shared online, while others may be selected to share in print ads, brochures and other marketing – including television ads to air across the United States and Canada.

Parfums Givenchy opens at Epcot – its first and only U.S. store

Lame, I hate this!

Don’t like that if I use photo pass I could find myself and family projected for all to see. Not all people llike this stuff. Not cool Disney.

I will have to wait to see it in person. If Otto think’s that its lame maybe another idea from him/her would be a idea for future things. Disney, as far as I’m concerned, always tries to get some input from their customers before spending thousands of dollars. Last year the lights on the castle were amazing looking like ice dripping then frozen. Go Disney.

Don´t get me wrong Terry, I loved the Christmas lights you mentioned and the show that lighted them in front of the castle. I jsut don´t care for guest being projected on the most iconic part of Magic Kingdom. I´m sure it´s going to feel like a big commerial just like the pre show of Kodak in Captain EO. A lot of happy people and a cheezy song. I think the castke is great as it is. I love the christmas lights, the castle changing colours lights and the firework. I even dig the moving projections of knowflakes but enough is enough. I see a lot of happy faces all day in Disney World and I don´t need them again on the castle.

Changes coming to Innoventions at Epcot