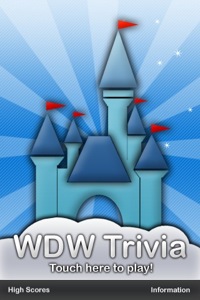 WDW Trivia – the first Disney trivia game for Apple’s iPhone and iPod Touch is now available on the iTunes store. Created by software developer Campbell/Gambill Designs of Orlando, WDW Trivia features more than 200 questions based off facts and information pertaining to the Walt Disney World Resort. Ranging from the opening date of Epcot to how many speakers you’ll find on a train on Rock ‘n’ Roller Coaster, WDW Trivia asks a plethora of questions related to all four Disney World parks and more.

Game play itself consists of three different modes: Magic Mode, Time Trial, and Free Play.
• In Magic Mode, players are asked questions until one is incorrectly answered – then it’s game over. At the end of the game, scores are submitted to an online leader board where users can compare their scores with fans across the world.
• Time Trial gives players 90 seconds to correctly answer as many questions as possible. When the timer goes off, their score is evaluated and the user is assigned a rank based on percentage and how many questions were answered. The highest rank is the elusive “WDW Master,” in which the player is awarded a virtual set of Golden Mouse Ears.
• Free Play mode is for those who aren’t in need of the competitive or fast-paced styles of Magic Mode and Time Trial. Here, questions are served one after another and it is up to the player to determine when to quit. 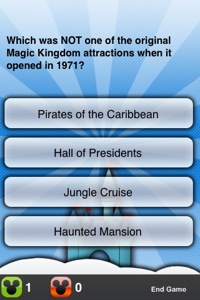 Whether you’re an absolute Disney lover or just a casual fan, WDW Trivia is sure to entertain. Also included with WDW Trivia is a feature for users to submit their very own trivia questions to be included in future updates. While users are encouraged to submit their feedback and support, updates for the application are planned to come out each month – which means an endlessly growing number of questions and features.

WDW Trivia is $2.99 and can be downloaded from the iTunes App store – or by clicking this direct download link.

Campbell/Gambill Designs is also working with author Steven Barrett to bring his Hidden Mickeys book to the iPhone and iPod Touch platform. In addition, an alternate Disney Trivia application “DLR Trivia”, based off of Disneyland Resort facts, will soon be available in the app store.

Icon Park to pause and redesign their Wheel...

Our experience using the Disney DAS Pass at...

Now I definitely need an IPhone!

I dont have this app, but I only hear good things about Campbell/Gambill appz

An amazing game, but some questions, especially with numbers, were a bit complicated.

The developers have told me they’re working on an update but it takes a while to get approved by Apple.
Be sure to submit your suggestions to them. I don’t like any of the “How tall is…” or How many feet long is…” questions. That isn’t the sort of trivia even Disney experts know. In most cases, who cares.
But overall it’s a fun game and I’m sure it’ll improve with each new update.

Inside look at the making of Disney’s...