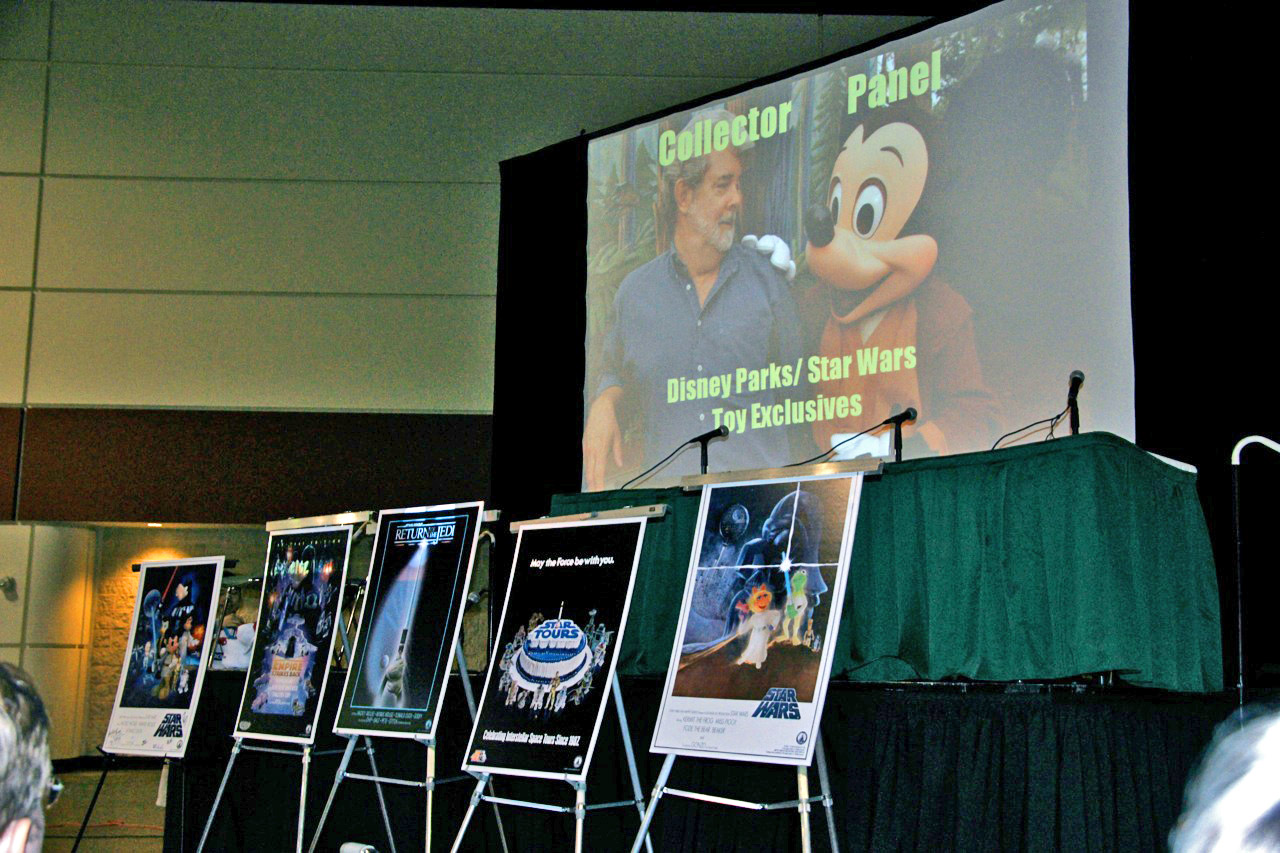 At this past weekend’s FX! International Show, a Disney products panel was held, hosted by Disney product developer Brad Schoeneberg, in which new merchandise was revealed for the upcoming Star Wars Weekends event at Disney’s Hollywood Studios.

Here are some of the highlights (click the images to enlarge them): 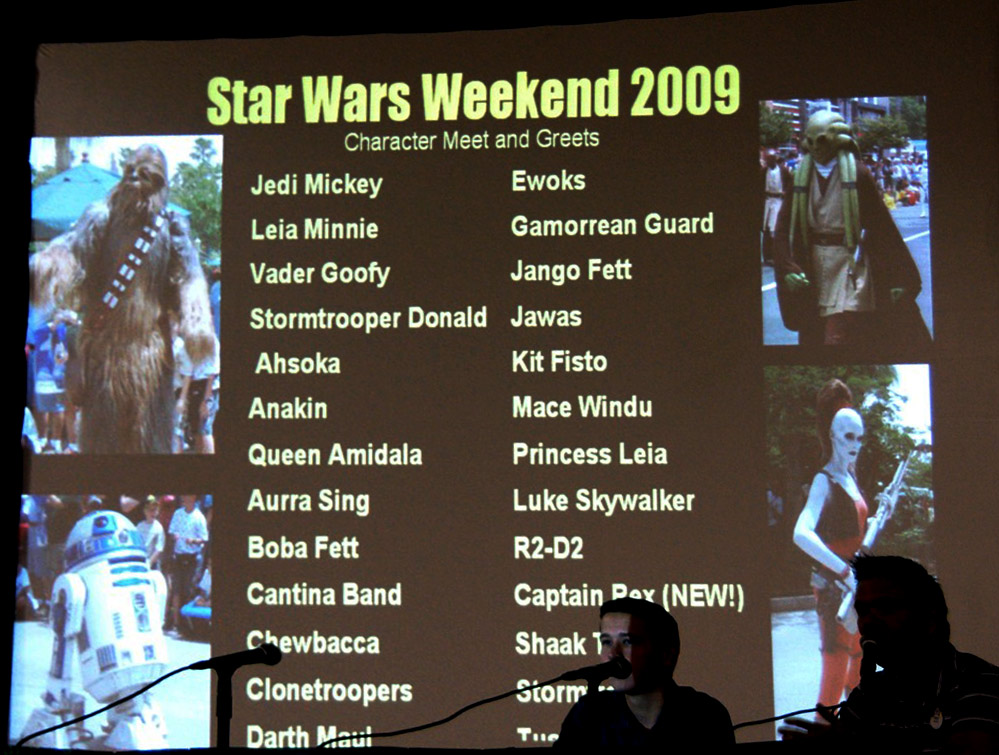 New to this year’s Star Wars Weekends event will be meet-and-greets with Clone Wars‘ Captain Rex. 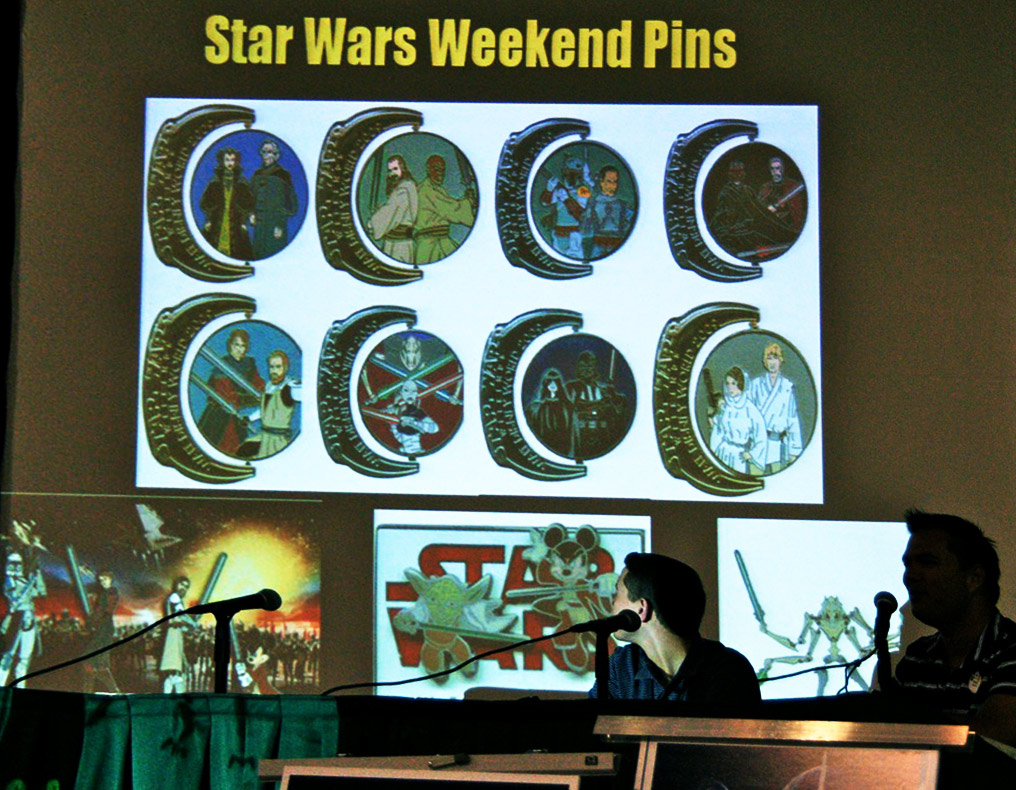 As always, several new Disney trading pins will be released, including this series of spinners. On the backside of each pin will be the Jedi or Sith logo. 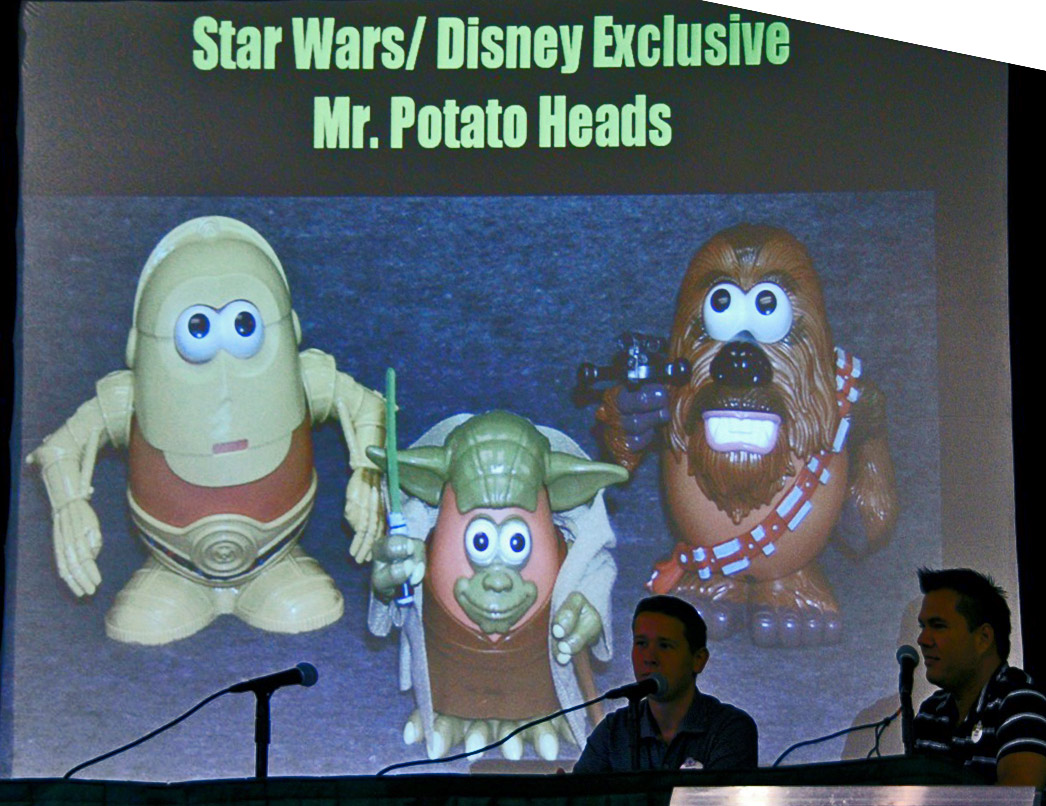 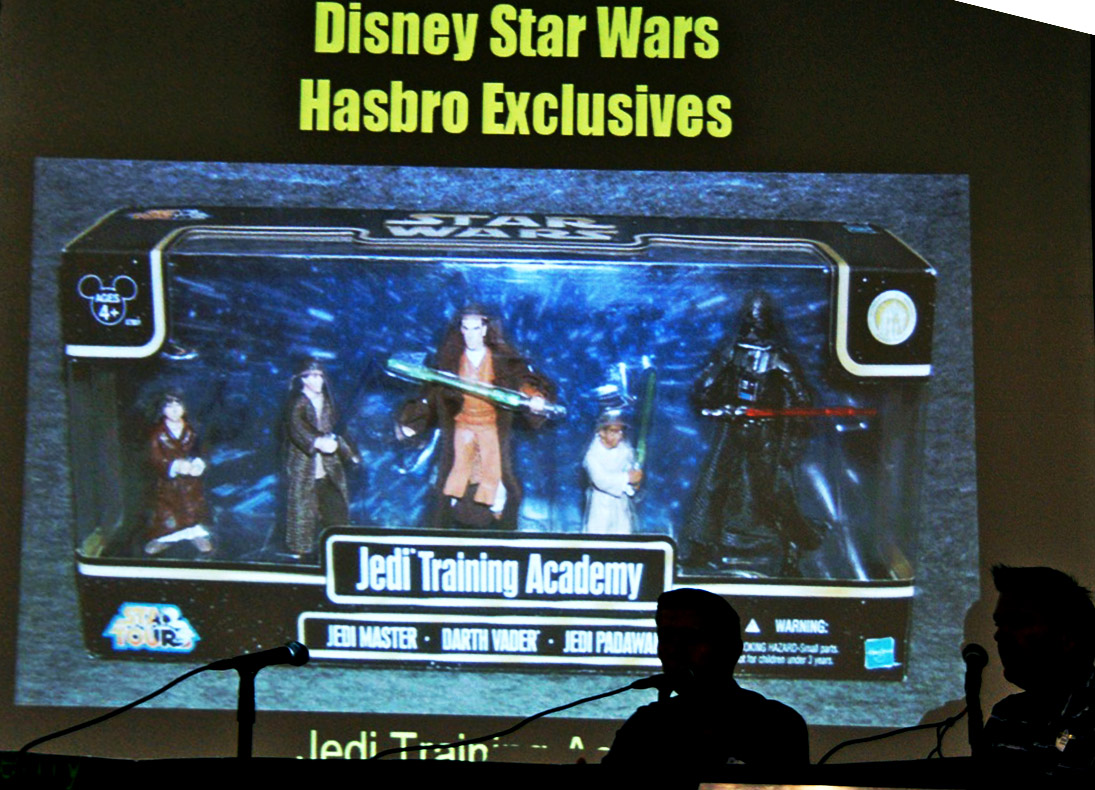 This new Jedi Training Academy figure set is the first time (according to the panel) that young Padawan learners will be featured in figure form at a Disney park. 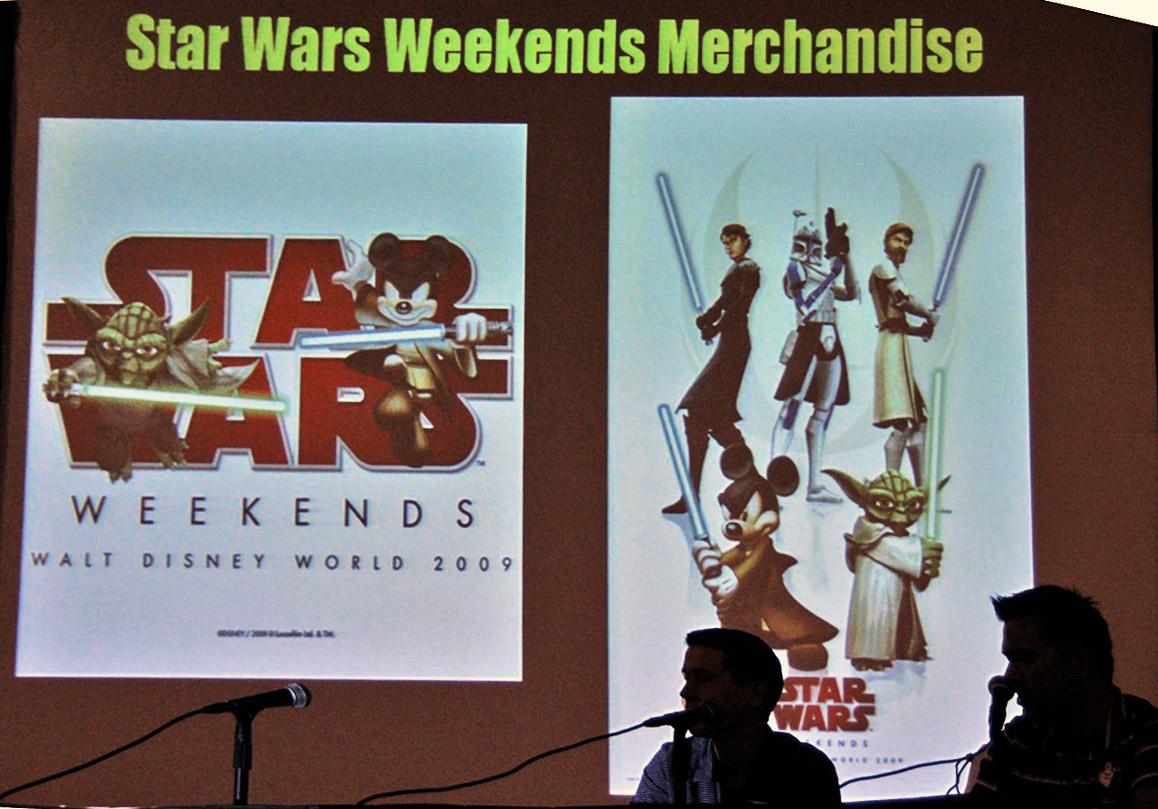 The logo for the 2009 Star Wars Weekends is based on the Clone Wars style of art. 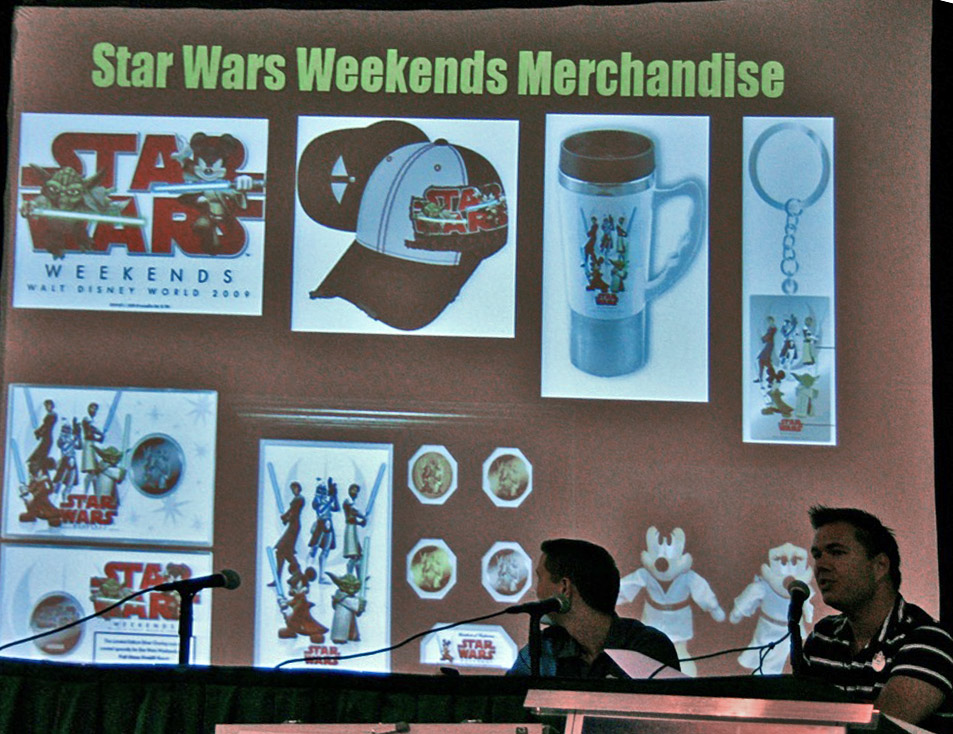 The logo will be used on a variety of merchandise. 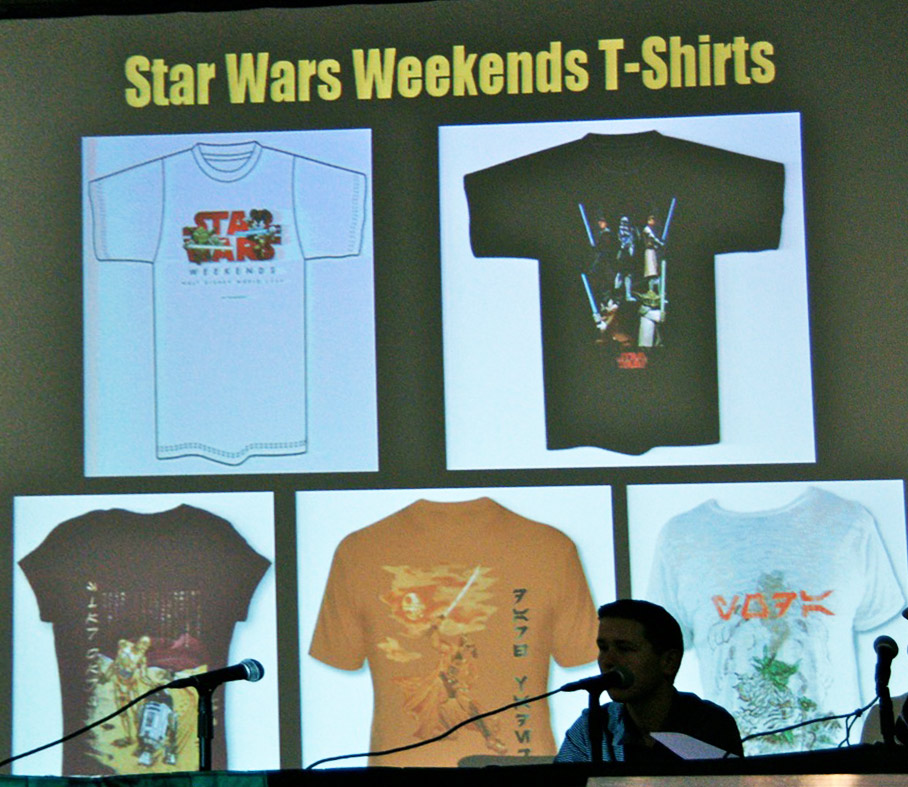 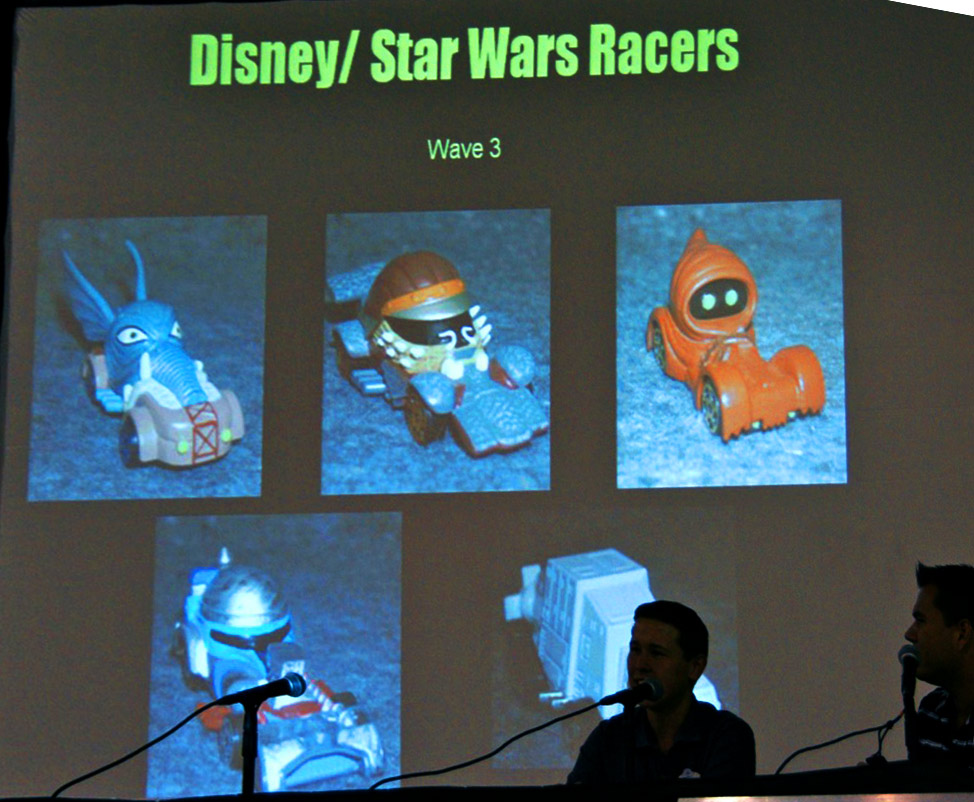 New in the Disney Racers line of die-cast cars are these five Star Wars-themed racers, including Watto, Lando in disguise, an Ewok, Boba Fett, and an AT-AT. 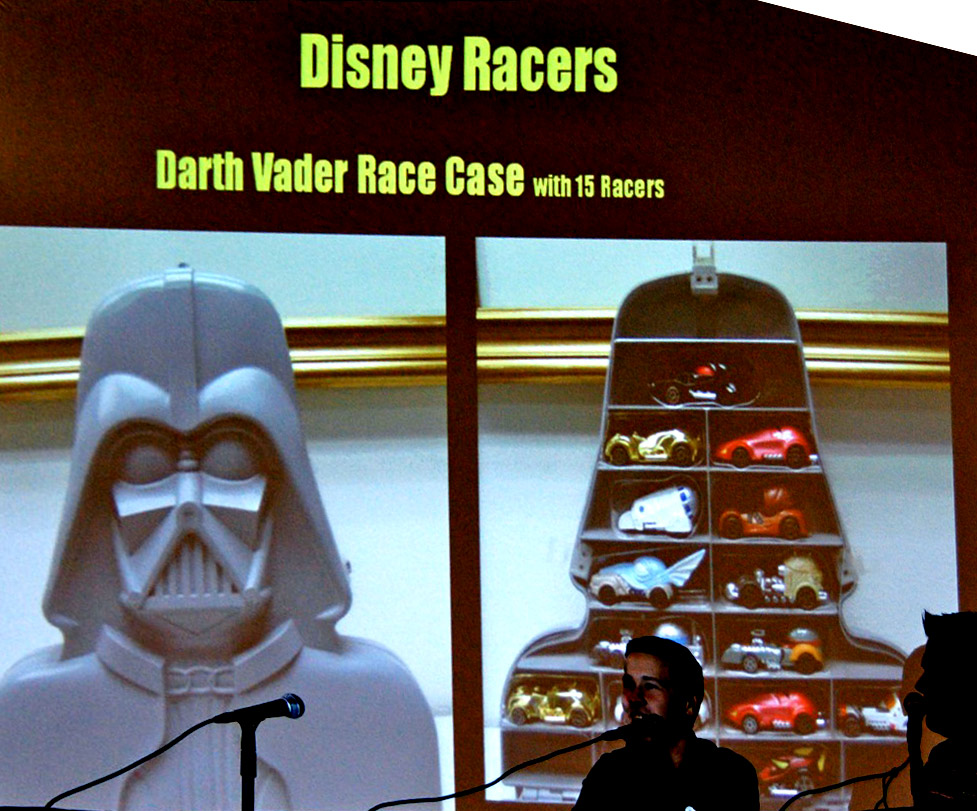 This Darth Vader Disney Racers display case will retail for around $50 and will come with a few exclusive Racers that cannot be purchased outside of this case. 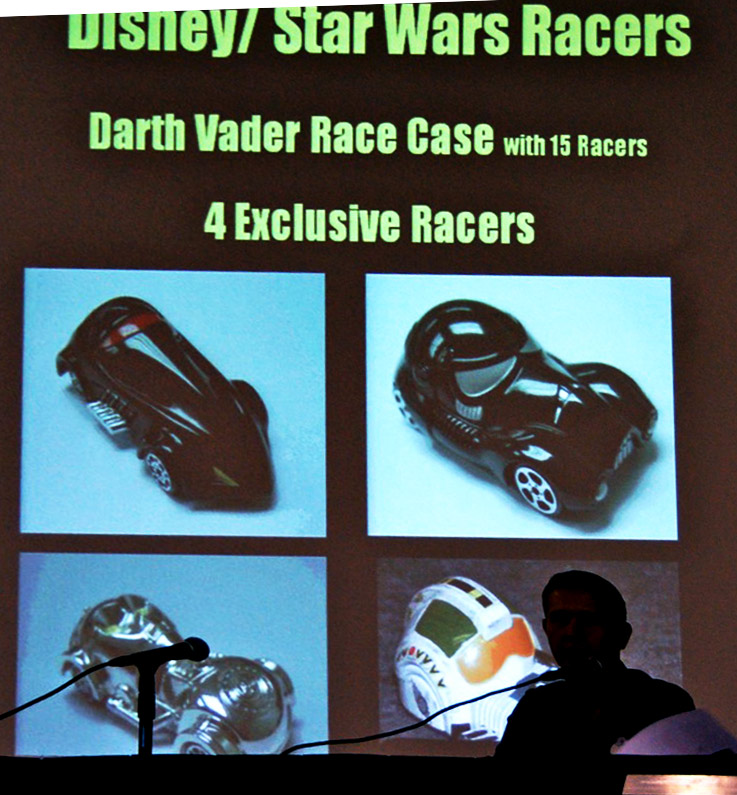 These are the Disney Racers that will be exclusive to the Darth Vader case. 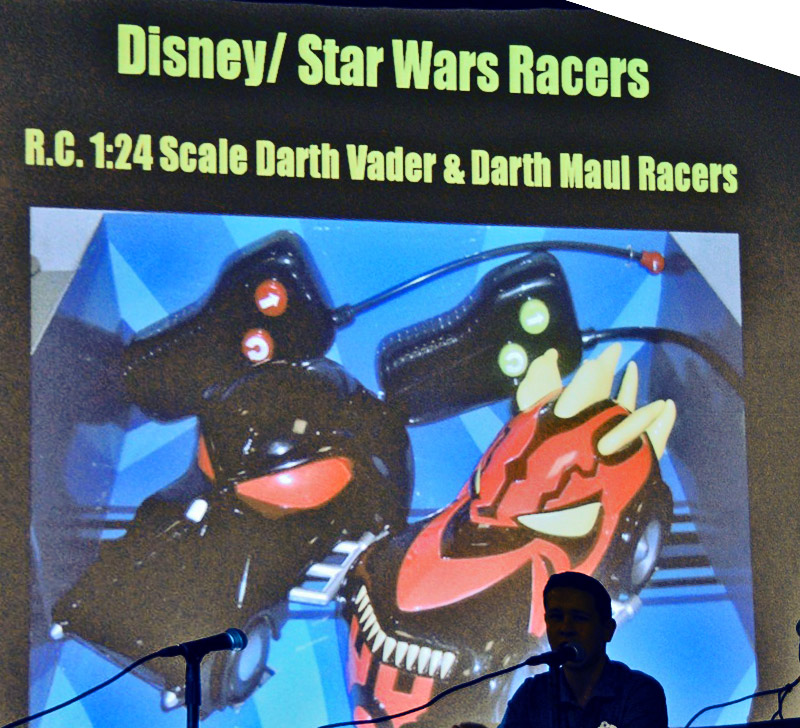 Larger-scale radio-controlled Disney Racers (Darth Vader and Maul) will be released this year. 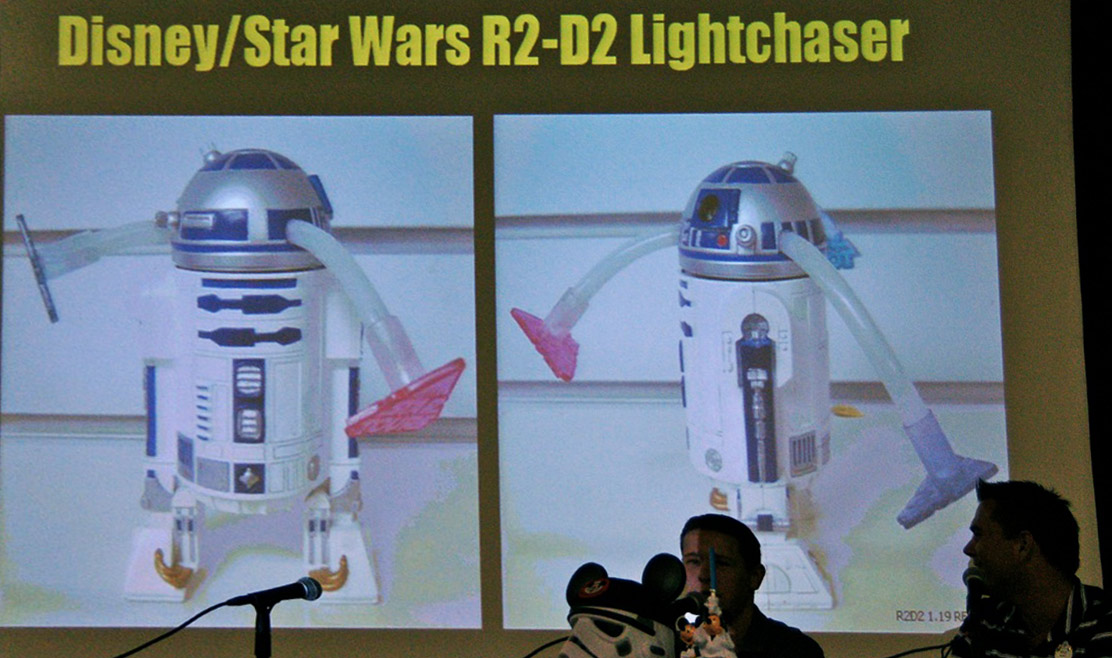 Artoo is finally getting the lightchaser treatment. 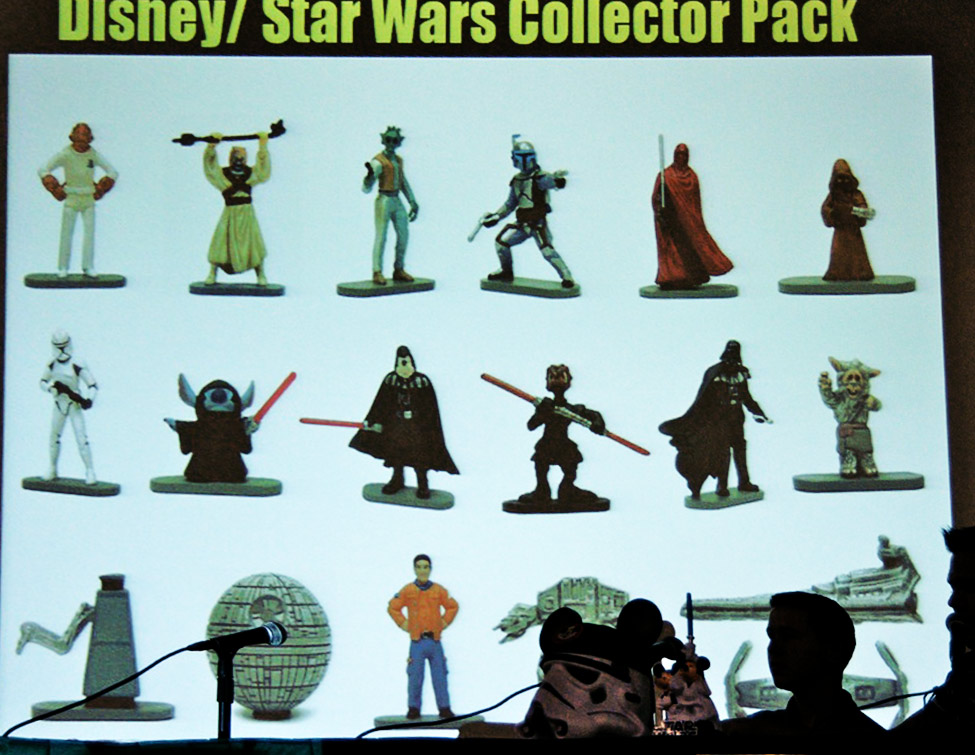 Disney has released several lines of collector packs, which are blind-packaged tiny figures. The new Star Wars assortment includes the first-ever release of a Star Tours cast member figure. Another rarity is the Teek named “Teek” found in the middle row on the right. 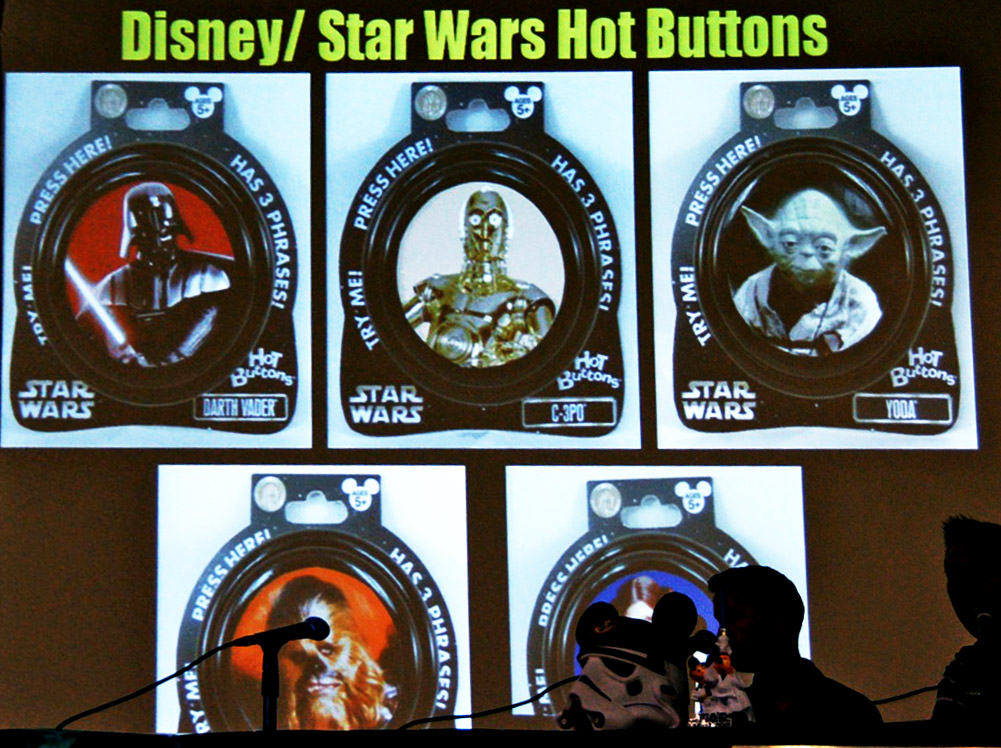 What appear to be cheap plastic buttons actually had the watching crowd excited as each one plays one of three Star Wars sound clips when pressed. The crowd favorite seemed to be Chewbacca. 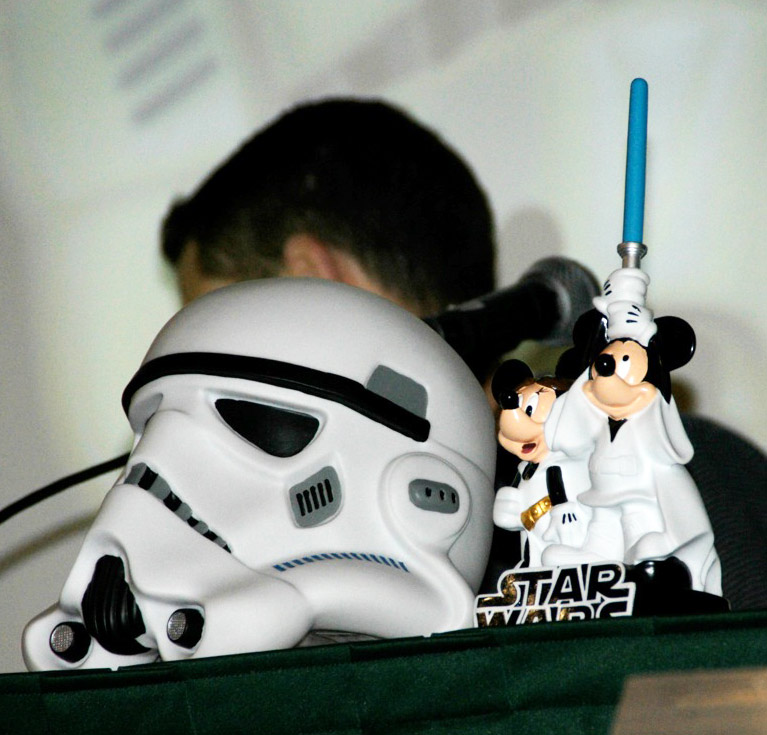 These new Star Wars banks will be released this year. The Stormtrooper helmet is around 10″ in diameter and sculpted by Gentle Giant.

Most of these products will be released at Star Wars Weekends, which begins on May 22 and runs for four consecutive weekends at Disney’s Hollywood Studios.

In addition to these products, StarWars.com has announced a new set of Disney-dressed-as-Star-Wars characters figures as well as their final line of Star Wars/Disney big figs. It was said that the big figs should be on-hand at the event this year, though there are no guarantees.

Photos from the new Kidani Village at Animal Kingdom Lodge

Are the posters in the first image going to be for sale as well? I’ve always wanted the Muppet Star Wars poster.

The posters will be for sale in jigsaw puzzle form only. Surprisingly, they have no current plans to release them as actual posters.

I’ll settle for the puzzles. I wish they would sell the Darth Vader Carrying case without the cars. I already have most of the cars included.

Thanks for the quick response Ricky. I really appreciate all the hard work you do for the magazine and the podcast.

Are the big figs going to be available for purchase online?

Two points: I would guess that the Meet & Greet Captain Rex is the clone from the Clone Wars animated series, not the Star Tours’ droid pilot. And the “Ewok” figure in the collector packs is not an Ewok, but a Teek named, wait for it, “Teek.” He first appeared in the TV movie Ewoks: The Battle for Endor and also shows up the Star Tours safety video.

Too bad the Stormtrooper helmet bank doesn’t come with the Mickey ears!

Bob – Thanks for the corrections. I’ll note them in the post above.

I actually have a clean graphic of the poster art which I put with the celeb list here: http://www.stitchkingdom.com/2009/04/09/celebrities-for-star-wars-weekends-2009-announced/

unfortunately that’s the actual size of the image that I have right now.

Ha! I’m super excited to be there again this year – I’ve been working as a Cast Member for Disney for a year, the whole year being at Studios. I was lucky enough to work Star Wars Weekends last year.

I love that they have a CM from Star Tours featured in the collector packs. Awesome! 😀

I have a question regarding the Darth Vadar Racer Case. It mentions that it contains 15 racers. Does that mean 15 and the 4 exclusive? Also, in the photo there are 2 of the same racer, will it be one of each?

They said that the Darth Vader case comes with the 4 exclusive racers and appears to hold 15 total – but you’ll have to buy the other 11 separately.

Do you know what days which pins are going for sale?

My wife’s going tomorrow. I wish that there were more cool figural thingies to get. I hate the cross-over figurines, and I could care less about the racers.

Off Kilter to perform at British Bonfire...