Dark Harbor returns to the Queen Mary on September 28 with a frightening new Feast maze.

Chef and his long-forgotten legend have resurfaced and will be brought to life through Feast, the new horrific maze onboard the ship venturing into previously unrevealed areas of the Queen Mary’s Dark Harbor. Chef and his carnivorous kitchen staff have resumed their deadly duties, collecting new victims for Chef’s latest recipes.

For the first time in Dark Harbor history, Feast will be the fourth maze onboard the legendary vessel. Feast tells the tale of Chef, a legendary spirit of the historic R.M.S. Queen Mary. As the tale goes, During WWII when the Queen Mary was in service as a troop transport ship, an enlisted military man serving in the ship’s kitchen quickly moved up the ranks to become a highly-decorated Chef.

Unbeknownst to the soldiers traveling aboard, Chef had a dark side. Quietly he would sedate soldiers in the middle of the night to prepare them as ingredients for his latest dishes. Eventually caught, the Chef was thrown into one of his own ovens and cooked alive.

Loyal to their leader Chef’s dutiful kitchen staff sacrificed their lives to become his evil henchmen, burning themselves in the same oven. The spirits of Chef and his evil crew went into hiding aboard the ship for many years. Now, these long-time stowaways have resurfaced to resume their deadly duties of collecting and preparing victims for Chef’s latest concoctions. 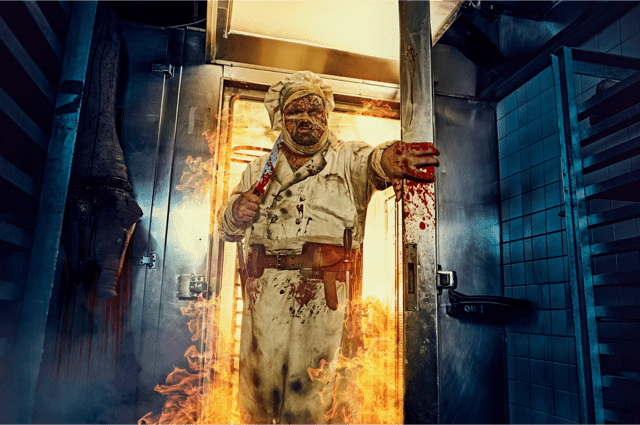 Visit Universal in spooky style with these...