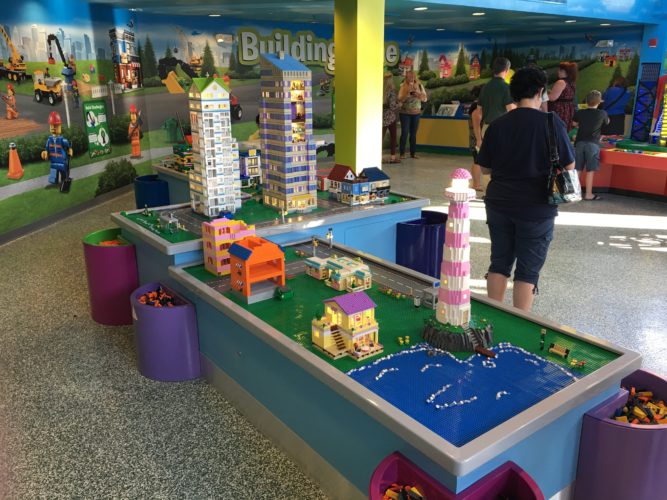 Brick-building boys and girls now have a couple new reasons to drag their parents to Winter Haven, because new Imagination Zone and Nexo Knights attractions are now open at Legoland Florida.

The freshly re-imagined Imagination Zone area and brand-new Lego Nexo Knights 4-D film are the latest elements to debut in Legoland Florida’s summer celebration. The theme park’s Imagination Zone venue, a popular indoor space filled with hands-on LEGO building activities in a variety of themes, reopened after a months-long refurbishment on May 27th. It now features several all-new areas where kids can build, race, and fly their creations in a cool indoor play area that’s been transformed with colorful furnishings and floor-to-ceiling graphics. Highlights of the Imagination Zone include the Creation Zone, Water Zone, Wheels Zone, Building Zone and Flight Zone.

Lego Nexo Knights: The Book of Creativity is an action-packed 4D film that is now playing daily in the Wells Fargo Fun Town Theater alongside The Lego Movie 4D A New Adventure. This all-new, 4D attraction is an immersive, animated adventure created especially for Legoland Parks and Discovery Centers. Set in the futuristic kingdom of Knighton, the 12 1/2-minute film follows five young knights in their quest to defeat Jestro, the Book of Monsters and their Lava Monster Army. Led by heroic Clay Moorington, the band of knights join forces with the great digital wizard, Merlok 2.0, to vanquish the enemy and stop him from getting his devious hands on a powerful book of magic.

Watch this video for a preview of Lego Nexo Knights 4D:

Afterward, kids can go on a quest to discover six shields scattered across the theme park that will unlock exclusive Nexo Powers in the free Lego Nexo Knights Merlok 2.0 mobile app, available for iOS and Android devices. Plus, Lance Richmond, the handsome hero of Lego Nexo Knights, will be available to greet guests outside the theater. Check the theme park’s free Show Guide for appearance times.

For a preview of these and other upcoming Legoland Florida offerings, watch this announcement video from earlier this year: