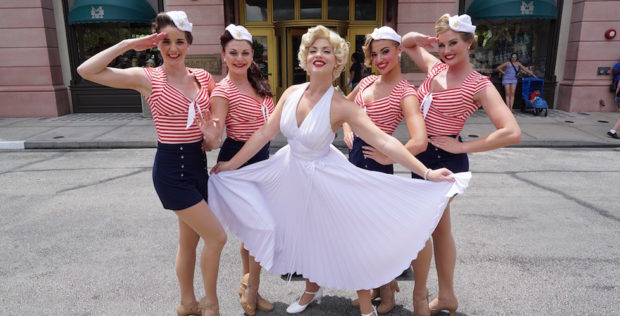 Marilyn Monroe and her dancers and director are in a new street show at Universal Studios Florida.

It’s been more than half a century since the world said goodbye to Norma Jean, but her legend continues to live on in Orlando through a new Marilyn Monroe street show that recently debuted at Universal Studios Florida.

A walk-around “celebrity” performer impersonating the silver screen sex goddess has been a fixture of Universal Studios Florida since the park opened. Other park celebrities, like the Marx Brothers, Charlie Chaplin, and Laurel & Hardy have faded away over the years. With the recent departure of Lucille Ball’s look-alike, Marilyn Monroe is among the last original face characters left (along with the Blues Brothers).

Thankfully for Marilyn fans, there’s now a brand new Monroe street show being performed daily at Universal Studios Florida’s New York section (a departure from her usual Hollywood haunt). Marilyn Monroe and a handful of dancers perform a pair of musical numbers in preparation for her “upcoming film,” including her signature tune “Diamonds Are a Girl’s Best Friend” (oddly, the Moulin Rouge film arrangement instead of Monroe’s version), and Christina Aguilera’s “Candyman.”

The five-minute production is followed by a meet & greet photo opportunity. The Marilyn Monroe street show schedule isn’t currently listed on the park map, so see an eye out. In case you can’t make it to the park yourself, here’s our video of the show.

Via Napoli serves its one millionth pizza

See both ‘Finding Nemo’ and ‘Finding Dory’ at Dory After Dark