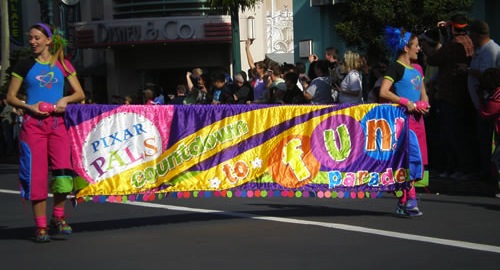 After Block Party Bash ended its run earlier this year, a new parade, Pixar Pals Countdown To Fun, made its debut yesterday at Disney’s Hollywood Studios. After seeing the parade in person and online, many fans were calling it a disappointment, while others online claimed it was better than Block Party Bash.

The new daily parade uses some of the same floats seen in Block Party Bash. Some others have been repainted. It also features Pixar characters not seen in the former Block Party, such as characters from “Ratatouille” and “Up”. The parade is set to a new soundtrack and also includes “Pixar Pals dancers”. Noticeably missing are characters from “Cars”, “Wall-E” and “Finding Nemo”.

Some cast members from the show have also posted online telling those who don’t like the parade to do something about it by contacting Disney directly.

This video will help you decide for yourself, but we recommend seeing the parade in person if you’re able.

Any visitor that had been to California Adventure and seen the Pixar Play Parade would know what a rip-off this is. This is a low-budget procession not a parade.

Also it’s possible that these floats are temporary. Now that the on-going construction at DCA has forced the closure of the Pixar Play Parade, DHS may be getting those floats and costumes.

I would like to see some new parade floats similar to Pixar Play Parade at DCA and a soundtrack that has music for each individual float.

I just want Pixar Play Parade because it is AWESOME!!!

I understand that casual or first time Guests probably wouldn’t feel the same way that I do, but I think it’s a rip that they didn’t even try to hide the fact that they used the same dancer costumes and floats from BPB. What I really liked about BPB was the fact that it stopped and got people involved. This new one doesn’t seem to create any kind of connection to the crowd.

i think this compared to Block Party Bash could be alot better.
there should be more character interaction and the parade itself could be longer than 7 minutes long
i just think that BPB is a better parade.

I think you’re being unduly generous when you use the term “Mixed Reactions” and say that online response has some liking it and others not. This gives the misrepresentation that there’s some real debate as to how good (or bad) this parade really is.

The truth is, and I’ve done a lot of reading on this for the past 24+ hours, the response to this “new” parade is almost uniformly negative. I would estimate a 5:1 ratio of “hate it” to “like it” reactions. (I found no one who was enthusiastically positive about it).

The parade is barely 6 minutes long and is short on everything else; performers, fun, engagement, catchy rhythms, cohesion…

It looks like what it is, something carelessly thrown together from the remnants of something much grander in order to save a few bucks.

This was a total disappointment and I don’t recall when I’ve seen such uniformly negative reaction to a Disney production.

I have to agree with Michael’s post. I was fortunate enough to make the trip to WDW 4 times and each time made it a point to see BPB. The energy of the performers and their involvement with the audience was outstanding. Truthfully, I don’t know how the performers were able to do what they did (especially in the heat) but so enjoyed their efforts!

I didn’t like the previous parade much, thus I’d just let it pass by and not watch the new one. This parade is a great time to ride the rides because lines are generally shorter around that time.

This isn’t a parade. Not sure exactly what to call it. Wasn’t a big fan of BPB either. Saw BPB once in CA and again when it came to FL. That was more than enough for me. But it was better than this excuse for entertainment. Disney needs to stop cutting corners so sharply. How many times can you re-purpose your floats. They’ve done this with other parades too. It’s getting very old.

Cheerleading and dance team venue to be...

Stars in the Parks: Lance Bass