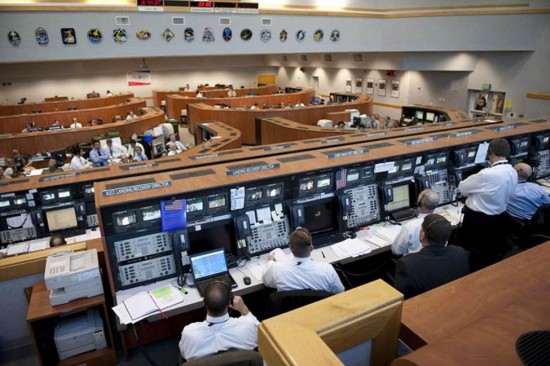 For the first time in more than 30 years, NASA is allowing Kennedy Space Center Visitor Complex guests inside the Launch Control Center – where NASA directors and engineers supervised all of the 152 launches for the space shuttle and Apollo programs.

The KSC Up-Close: Launch Control Center Tour, the second in Kennedy Space Center’s special 50th anniversary series of rare-access tours, takes visitors inside Firing Room 4, one of the Launch Control Center’s four firing rooms and the one from which all 21 space shuttle launches since 2006 were controlled.

Inside Firing Room 4, visitors will pass by the computer consoles at which engineers monitored the computerized launch control system’s thousands of system checks every minute leading up to launch. They’ll see the main launch countdown clock and many large video monitors on the walls, and enter the “bubble room,” with its wall of interior windows through which the Kennedy Space Center management team viewed all of the proceedings below.

“With so much on the line, the people who worked in this room were under tremendous pressure not only in daily operations but particularly as the countdown proceeded,” said Bob Sieck, former launch director, Kennedy Space Center. “They had to handle the tension and their emotions as the tests became faster, the astronauts took their place in the shuttle and thousands of people and news media were gathered outside to watch the launch.”

The Launch Control Center Tour is now open and will run through the end of 2012 with a limited number of daily tours.

The Launch Control Center will continue to operate in guiding the next generation of rocket launches from Kennedy Space Center for NASA and potentially for commercial space programs. Future launches of SpaceX, whose recent launch from nearby Cape Canaveral Air Force Station resulted in the first mission by a commercial company to travel to and dock with the International Space Station, could take place from Kennedy Space Center beginning in 2013.

The tour will also showcase the Launch Control Center’s lobby, which features 152 wall plaques – one for every mission guided there since the first, the unmanned Apollo 4 in 1967. Included are the manned Apollo moon missions, the Apollo-Soyuz Test Project in 1975, the Saturn V launches for Skylab in the mid-1970s, and the launches for the 30-year Space Shuttle Program.

The tour is led by a trained space expert, giving visitors an insider’s view of the space program from launch preparation to liftoff. The tour also includes drive-by views of Launch Pad 39 and culminates at the Apollo/Saturn V Center, where visitors can resume the regular tour. Price is $25 for adults and $19 for children ages 3-11 plus tax, in addition to admission.

In addition, Kennedy Space Center Visitor Complex is the future home of the space shuttle Atlantis, with a multimillion-dollar exhibit expected to open in July 2013.

The Launch Control Center Tour is now open and will run through the end of 2012 with a limited number of daily tours. For more information or to purchase tickets click here.

Click to 19:59 in the July episode of Attractions – The Show to see more from the tour:

I hope they extend this, it looks wonderfull.
I love the tour of the full rocket that has the old controle room where consoles light up when you listen to the tape. It came to life and I chocked when the eagel landed. So impressive!

‘The Science Behind Pixar’ opening at Denver...