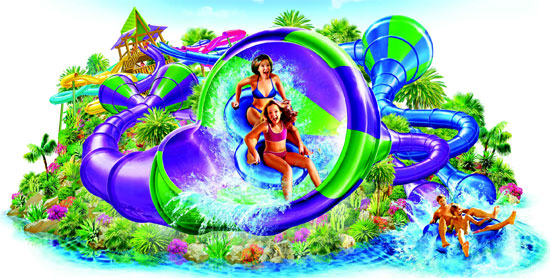 A new family water slide is coming to Aquatica in spring 2010. Omaka Rocka will feature high-speed tubes and half-pipe funnels that’ll have guests splashing and sliding frontward and backward and climbing the walls. This is the first water slide of its kind in the world.

Riders will speed down flumes into massive funnels, sliding high up one side and then the other, rocking back and forth, feeling a sensation of near weightlessness. Coming out of the funnel, they’ll skim into a splashdown.

Omaka Rocka will give everyday guests the feel of a half-pipe, previously experienced only by skateboarders and snowboarders.

Aquatica, SeaWorld’s water park, first opened in the spring of 2008. Omaka Rocka will be their first major new slide. You can read all about Aquatica and its opening in Vol. 1, Issue 3 of Orlando Attractions Magazine.

Santas in training take Manta for a spin

Any idea on what happened to the Tornado Falls magnetic launch slides that the LA Times reported were coming as well in 2010 last month? Have they been canned, or is Aquatica spreading the announcements out to maximise media coverage?